Can a forest provide enough oxygen to breathe on a low oxygen planet?

A person is placed into the middle of a forest on an alien planet. The planet is to be considered Earth equivalent in all respects (mass, size, atmospheric pressure, etc.) except atmospheric composition: with only trace levels of oxygen - meaning they would asphyxiate almost anywhere else on the planet.

Is it realistic that being within this forest, that they could survive?

biology atmosphere space-colonization
Share
Improve this question
edited May 9 at 17:23
Razmode
asked May 6 at 21:36

Our common deciduous trees are actually poor net producers of oxygen. By different estimates, it may take about an acre of trees to produce enough oxygen for one person to breathe. Tropical rainforest is a better oxygen producer, however the real question here is not how much oxygen is produced but how concentrated this oxygen can get. A human needs at least 16% of oxygen (at 1 atm pressure), anything lower would lead to asphyxiation.

Unfortunately, in real world gases are very quick to diffuse and mix with the rest of the atmosphere. Carbon dioxide, for example, is being released under many processes, and still its concentration quickly drops to minuscule 0.04%. One has to be locked in a room to see this concentration rise noticeably, and it takes unusual (though not impossible) circumstances for this concentration to exceed 16%.

Thus, this forest has to be somehow enclosed so the oxygen can be kept trapped. Obviously, we can't keep photosynthesizing forest in a cave, and next plausible geological formation is a bowl - a deep depression or a valley, which must be isolated from winds. In such a valley, gases like oxygen can accumulate to high concentration, creating possibly breathable atmosphere.

Alas, this oasis would exist only until the first storm. A storm would blow away oxygen completely, and it will take trees years to build breathable atmosphere once again. 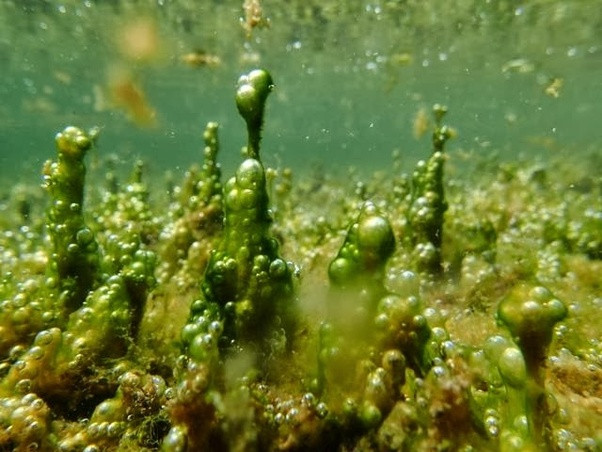 An Earth forest lets its oxygen diffuse away. But you are not obliged to use earth plants. You can make your alien forest be what you need it to be. What if this was a thick CO2 / NO2 atmosphere, or underwater? Maybe your plants make and trap oxygen bubbles like these algae? Maybe the forest plants cooperate to keep these oxygen bubbles within the forest for their own use. Your character could survive within one of these.

Not only would the oxygen diffuse away, the forest would die.

Trees photosynthesize complex organic molecules from sunlight, water, and carbon dioxide, but they also metabolize the molecules with oxygen to sustain their lives.

A mature forest, without new growth that is creating molecules to make itself, is not a net creator of oxygen, but that's a footnote. The important thing is that even a quickly growing forest would lose all the oxygen it created to the atmosphere without it, and die.

I am afraid it is totally impossible.

The diffusion coefficient of oxygen in air (in your case it will be in pure nitrogen but it should be practically the same) is 0.2cmÂ˛/s to 0.3cmÂ˛/s depending on the temperature and the humidity.

The molar density of oxygen at standard pressure is 22.4 L/mol

You should probably double-check everything, because I went through a few orders of magnitudes errors.

If someone is in the mood for solving differential equations, he could probably calculate the amount of oxygen that will be available right in the center of the forest (it is a gradient after all) given a rate of oxygen production.

I figure that since you've pretty remarkable trees to begin with if they can survive at night time (assuming they need oxygen at all), then you can make-up your own rules to an extent.

These are the rules you need to play by:

The O2 levels would be ideal at 17-35%, no trouble breathing or with oxygen toxicity.

If they go above 35% or so, then clothing will become dangerous, one static spark and you're on fire. So strip.

If they go above 40%, then the oxygen becomes increasingly toxic, your body will age fast as oxidisation occurs within tissues.

In the graph below, you'll see that normal atmospheric pressure at sea level is at the top: 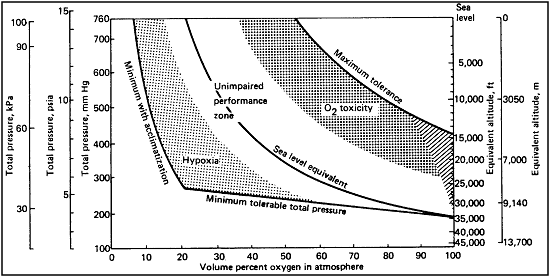 Dusk would be a danger time, as the photosynthesis tails off, the O2 will start to reduce. The time for unconsciousness would be around 12% (unless acclimatised as a mountain climber), death would occur at 6%.

It would be perfectly possible for the forest to have the only sufficient concentration of oxygen on the planet - if the forest was at the bottom of the deepest canyon or trench on the planet, and if the other regions of the planet had a little less oxygen than could support human life.

And possibly the forest will eventually - which might be many millions of years - provide enough surplus oxygen for higher elevations of the planet to have sufficient oxygen.

So you want a planet with an atmosphere thin enough that it has "death zone" thin air all over the surface, except in one very deep region where the air is thick enough.

So you want to check Habitable Planets for Man, Stephen H. Dole, 1964, for the atmospheric requirements of humans.

Dole discusses atmospheric requirements on pages 13 to 19, and in table 4 on page 21.

The oxygen requirement is oxygen pressure between 60 and 400 millimeters of mercury.

There may be oxygen producing photosynthasizing plants over most of the planet's surface, but the oxygen they produce doesn't stay local but diffuses all over the planet's surface, so there is equal oxygen whereever the altitude is the same. And only the depression with your forest has a low enough altitude to have concentrated enough oxygen in the atmosphere. Everywhere else on the planet the oxygen pressure is about as low as in the "death zone" on Earth, except that the air is really thin in the high mountains and plateaus.

There was a somewhat similar question asked a while ago.

fortunately you do not need as strong a pressure differential on your world.

Without knowing the size of the forest weather conditions etc. I'd still have to say no. Any single mass of vegetation unless a great amount of time passes wouldnt be able to sustain the needed mix of breathable atmosphear without it dispersing to the rest of the planet.

It depends the size of planet, forest area cover, how much the forest covers can produce oxygen and the consumption of oxygen on that planet. This is the simplest and shortest

A greenhouse-like setup may be viable - it is up to you to make it natural or artificial.

The key point is to limit the diffusion of the oxygen out and other unpleasant gases (e.g. carbon dioxide) in.

Be aware that 1% carbon dioxide at our pressure can be survivable for a human, but is deadly for most of our modern plants. It is way too acidic. They are adapted to like pre-anthropocene 0.03% and today's 0.04% already make some of them suffer.

As other answers pointed out, plants also do need oxygen for the night.

Not the answer you're looking for? Browse other questions tagged biology atmosphere space-colonization .

6
Would complex life evolve on this planet, and could humans survive on it without much outside help?
8
How humanly survivable is my world?
40
Reasons why air travel isn't feasible, but ground travel is?
11
How do I increase air pressure for the planet Mars?
6
Is it possible to have a planet with earth-like mass but double the atmospheric pressure?
4
How does composition change if you extend an Earthlike atmosphere 50km below sea level?
9
Can various human-like aliens live together on a space station with a common atmosphere?
6
Reasonable atmosphere for an Earth-like planet orbiting a K dwarf star (including abiotic oxygen)
4
What would the atmosphere of the Archaean Earth look like? (Before massive oxygenation)
5
What is the largest achievable oxygen-atmosphere world?