Would these changes alter the effects of Tornado Alley?

Here is how the meteorological danger zone called "Tornado Alley" is made: 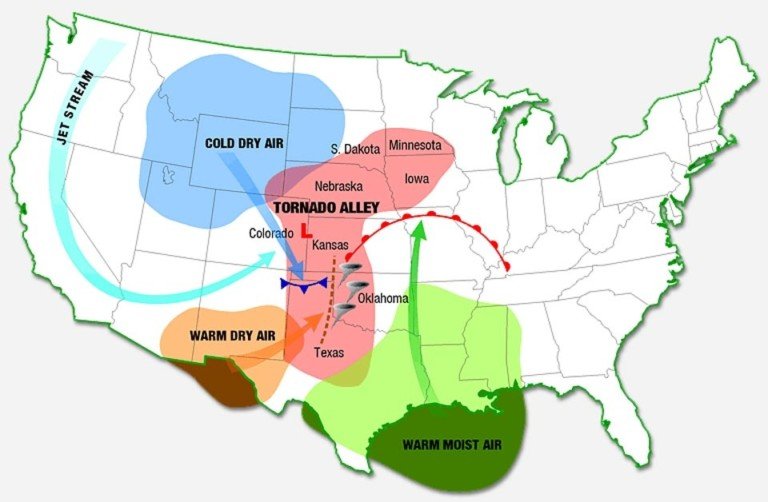 I made this scenario with two goals in mind:

Would these described changes check both goals out?

The way to accomplish these changes would be to not have either of the two Rocky Mountain building events. When the Atlantic Ocean first started opening up, the western part of the US was under water and rivers ran from the Appalachians to the sea - in the west.

Without the Rocky Mountains, the weather pattern is radically different. You would have the possibility of rain moving from the west till the clouds hit the Appalachian Mountains and dumping a lot of water there. Unfortunately, you are just as likely to have a desert in the same areas as desert today - 30th parallel. In the geological record, there is a lot of sandstone which is formed after sand dunes were marching over the land.

Unfortunately, these changes would affect the Midwest's prairie fertility. It may be less of a prairie and more of woodland - because of the extra rainfall. It might compare to the Amazon jungle but in a more temperate zone. Also, if the mountain building didn't happen with any attendant volcanism, you might have poorer soil.

12
How would a "tornado-surfer" protect himself?
1
The Midwest, Great Lakes Earth
2
The Great Plains Between Two Taller Mountains
1
Changing the Danger Zone of Tornado Alley
7
Climate conditions and/or atmospheric changes required for the Everboom
3
What would be the consequences of these biological changes to a human
6
Where could you store the energy from a tornado?