Could a gas giant with layer similar to Earth atmosphere exist?

Imagine a world like ours. Gravity, atmosphere, sky... just nothing solid down there. At least not anywhere close. Would it be possible?

I know this is similar to this question. So to specify what I mean:

I'm not asking if a gas giant could be naturally created. All I want to know is whether it could exist at all? If it was created artificially, by whatever means, would it be possible for it to sustain, survive a similar time as Earth did, without continuous energy income?

Also, I don't care what its main part is. I only care about one layer. Down there anything known or suspected might be. Actually, the more of the deadliest stuff the better.

And last but not least, would it be possible for both gravity and pressure to be Earth-like at some depth?

Lets take Jupiter as one example to start with: 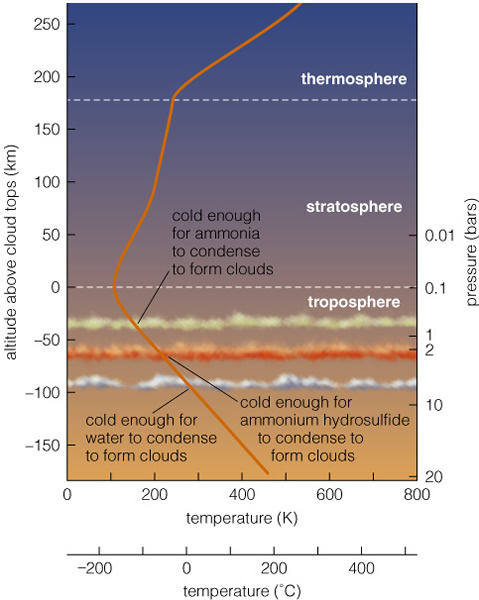 To be earthlike you need:

In theory if the planet had a different composition or orbited at a different distance from the star those two points could be made to line up. Sudarsky's Gas Giant Classification system looks at the various known types of gas giant. Class 2 Gas Giants in particular actually have Water clouds which again is encouraging from the point of view of pressure and temperature.

The problem is composition: Jupiter's atmosphere is composed of about 90% hydrogen and 10 % helium. There are only minute traces of methane, water, ammonia, and rock dust.

So, this is your main problem. The gas giant would need a radically different composition from anything we've ever heard of in order for it to have a high enough percentage of heavier gasses like nitrogen, especially at the altitude where the atmospheric pressure is survivable for humans. You should also consider that Oxygen is highly reactive. If you do not have lifeforms of some sort creating it you are very unlikely to find free oxygen, it will all react away.

5
Can I have my blue/green habitable Gas Giant?
9
Could air gas giants exist?

9
Could the moons of a Gas Giant all be habitable if that planet was in the habitable zone?
6
Two orbits, Four habitable planets in the goldilocks zone?
22
Realistic sky of an Earth-like moon orbiting a gas giant (length of day and size of celestial bodies)
6
Making a slow orbit around a large gas giant
3
I want a layer out of frozen clouds floating around my planet. How could that work?
19
Is it possible to place a permanent probe on Uranus?
7
Possible sky colors compatible with life on earth
4
is there a way to levitating entire body of water in earth and make it stay in the sky?