Darmstadt, Germany, current day: All ESA members meet on super secret meeting. They had it enough with NASA and want to claim their first place in space. How do they want to do it? Landing manned mission on Mars first!

"Err... Do we have money for that? We have to bail out Greece first." Says the German colleague.

"That's right. But still, we can fake it for just few bucks, right?!" asks someone.

So, the question is: What is the minimum amount of money (in EUR) to successfully fake Mars landing? 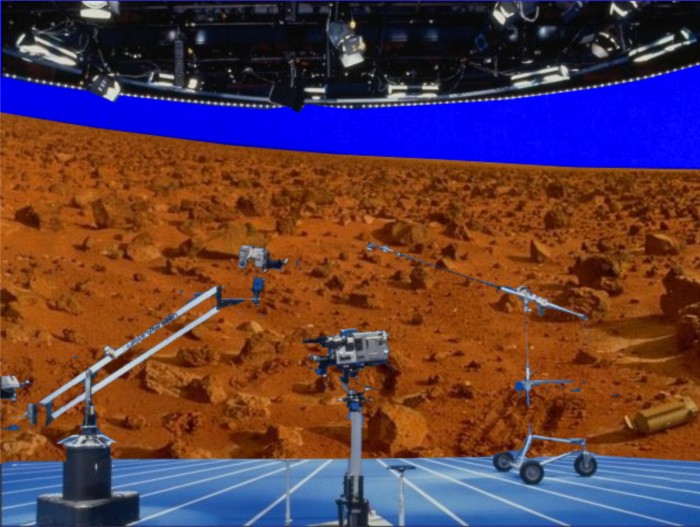 One big handvawe: Everyone involved in the process agrees with the fact, that ESA is going to fake it. They just want to hear Ode to Joy from space for a change.

Bonus points for elaborate guess how many people do I need being involved.

Keep in mind: This is ESA/European mission only. So if you need specific place to fake the landing, you have to find such place inside Schengen Area. Faking the landing at Atacama dessert is no-no.

If the hoax is to hold, you have to put enough money for a credible mission into the ESA budget, and that money has to end up on the balance sheets of tech companies. Just hiding it in Swiss bank accounts won't do.

Also, people are going to track the transmissions of the Mars ship. Amateur astronomers will watch the reentry.

So it seems that you have to send something to Mars and get something back. Send an unmanned sample-return probe and claim that it was manned all along. A couple of billion, or perhaps a few hundred million?

There already was a movie about that scenario, of course.

The spacecraft used for the transfer is going to have to be believably massive and is actually going to have to go to Mars and come back. That's a big chunk of a real manned Mars mission right there. People can see the thing in orbit and will be able to track it (particularly its engines when thrusting). The exhaust from the engines will also be a dead giveaway for it being significantly smaller than it is supposed to be. It will also be obvious if the rockets launching the components are smaller than they should be.

Even saving on things like life support and safety systems would be difficult. You are going to have to design and test the systems to maintain the illusion, otherwise the people doing that design will be suspicious. Or you could bring everyone involved in the design, testing, and construction into the conspiracy and hope that none of them leak anything, and then keep the designs secret so outsiders can't check them, otherwise the fact that no effort was made in designing them would become obvious.

You are going to have to have a fake crew. Their training is going to be fairly visible, and so will cost about as much for a fake mission as a real one. They are also going to have to go into hiding for the duration of the mission proper (months to years). To be believable they are also going to have to be the kind of people who would be expected to go on such a mission. Reasonably well known members of the scientific community and possibly from military aviation (the latter probably being less likely for the ESA than for NASA) using a "no name" crew is going to be suspicious, as will an all military crew from the ESA.

So you have to get a group of scientists, respected ones who will have a strong interest in having a real manned mission to Mars to agree to go through all the difficult training, and then go into hiding for over a year, then keep the secret for decades afterwards. This would be a massive breach of scientific ethics and a commensurate risk to the professional reputations that's essentially certain to be uncovered eventually, even if the hoax could be pulled off temporarily.

The crew are also going to expected to interact with Earth on video (with appropriate time delay) while in transit. So fake zero-G footage will need to be prepared on time scales ranging from immediately to half an hour as the mission progresses. Free fall in an aircraft can't be faked for long enough and the other option is "hiding" on a human habitable spacecraft in orbit. (which would need to be built in addition to the fake Mars ship) and would require getting the crew to it rather than the Mars ship (secretly), then down to Earth to fake the landing without anyone noticing, then back up again without anyone noticing to fake the trip back, and then get them back down without anyone noticing that they came from the wrong spacecraft.

A spin gravity habitat could be included on the fake ship, but spin gravity, especially on a small enough diameter to be practical to build with current technology would have noticeable differences from real gravity. It would also make the fake ship more expensive to build, and viewers might wonder why the crew never send videos from the zero gravity area of the ship (at least not pre-recorded videos or ones with time for post production special effects, or short enough ones to be made from a diving aircraft.

In short, it's even more laughable than the idea of the moon landings being fake, even if you go through the complete motions of sending a crew capable ship and just not putting any people on it, which would be just as expensive and so would completely defeat the point, and built another long term human habitable spacecraft in orbit in secret.

Whatever it would take to actually perform a manned Mars landing.

As my dad always tells me, "follow the money."

Remember that ESA's budget is public, as are the profits and revenues of all its contractors.

Also remember that the global financial market is one of the most heavily scrutinized systems on the planet. Everyone will notice if the hundreds of billions of dollars that would be required for such a mission (and that ESA would have to claim to be spending) never appear. Therefore ESA's only option is to actually spend the money.

Also, if the politicians supporting this mission want to be re-elected, the mission will have to appear to be a success, returning actual data or samples (neither of which can be convincingly faked, nor reasonably withheld from the international scientific community). At this point ESA has actually conducted complete unmanned Mars mission and paid for a manned one, so why fake it?

Doing it in a studio has some problems with how convincing it will look, especially under the scrutiny of the tin foil hat people. You will want shots of the rocket landing from a camera attached to the rocket. I don't think todays CGI will hold up, mainly because it will look similar to all the CGI we've been seeing in films like Interstellar etc today.

With the same technology they used to land on the moon before, there are probably ways to cut corners and do it relatively cheap. Compared to landing on Mars you will probably save billions.

Edit: Just to add a few more details to make the hoax more convincing. As I stated in the comments to this answer, people will want to see the rocket leaving the Earths atmosphere and re-entering, not an easy way around this than actually doing it.

Once behind the moon, you split the rocket in half and send half of it to Mars, where it will go behind Mars and crash into the surface (hopefully won't be discovered for 20 years). This will give astronomers the impression that you went and landed behind Mars.

The half of the rocket with astronauts in will land on the "dark" side of the moon (which isn't actually dark). They will film the landing, and edit it on their trusty laptops which they took along with them (or send it encrypted back to Earth if they're not good at Adobe After-Effects).

When the Mars-bound rocket gets to Mars, they send the edited footage unencrypted back to Earth for the viewers back home. They then take off from the moon and head back to Earth and do everything as normal.

The main thing is to keep the number of people knowing what's going on down.

Ship another probe to mars with a packed billboard. Unpack it for Curiosity to "find". The billboard reads "Mars Tours, $10,000 a head, call 8675309", or some number that doesn't actually work. Edit phone company records to make it appear the line was shut down for trademark violations, and the previous owner was Mars, Inc. Bribe some celebrity to claim to have taken the tour. Use red desert dust (where they filmed The Martian) to mess up his boots.

Cost: about the same as Curiosity + two bribe (one celebrity, one phone company employee).

People in on it: the people who assemble the probe + one JPL employee (to make it appear the mission was lost) + celebrity + phone company employee.

Not the answer you're looking for? Browse other questions tagged reality-check space mars or ask your own question.

23
Could a Mars colony use asteroids as weapons against the earth?
16
OK, I cannot fake the Mars landing. Can I fake Martians?
5
What is the most effective way to build road on Mars and Moon?
9
How to prove Mars landing
6
Fake Apocalypse - asteroid
28
What would the effect be on Earth if Mars disappeared?
1
Can Mars colonies use the interior of mountains and hills rather than the surface?
3
Hidden Aliens on Mars?
2
How would someone keep time on Mars?
74
How could we fake a moon landing now?