If a dragon could fly without magical assistance, how much force could a dragon exert in directed air attacks using the force of its wings?

I plan to have dragons in my fantasy setting and wanted to figure out just how much force their wings would need to generate in order for them to fly.

Rules for dragons in this setting:

I'm just looking at the amount of force their wings would need to produce in order to fly so that I can determine how much force they could exert if they tried to flap their wings to create a directed air blast to topple foes and possibly weak buildings. 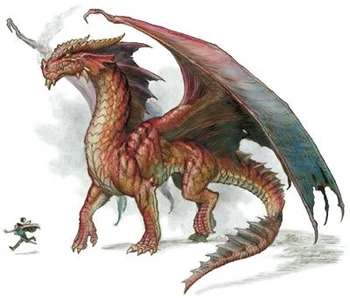 For reference, this is what I was considering for a full grown dragon in my setting at least in terms of body plan and proportions. Without any measurements of the reference image, I'm going to fall back on what one of the D&D books describe for a large dragon. 2700 pounds and a 45-50 foot wingspan will be the average.

With all of that out of the way, how much force would a dragon of about that weight and wingspan need to fly? And how much of it could they direct in front of them as an attack? Would it topple humanoid foes or just kill them? Could it wreck some buildings and fortifications?

science-based dragons flight wind
Share
Improve this question
edited May 4 at 2:36
Arvex
asked May 1 at 16:27

In level flight Lift = Weight and Lift/Drag = Weight/Thrust. If we know the lift drag and weight we could then easily determine thrust. Determining lift and drag is non-trivial. Given the many unknown quantities deriving thrust this way is a bit of a dead end.

However if we assume that your dragon can hover we can derive some numbers that don't rely on as many undefined quantities. Unlike level flight where aerodynamic lift counteracts the force of gravity, downward thrust needs to counteract gravity on it's own. This greatly simplifies the equations.

For a 2700 pound (1225 kg) dragon to hover it needs overcome the force of gravity, without the help of aerodynamic lift. At a minimum it will need to be able to produce at least 2700 pounds of force (about 12000 Newtons). Add an extra 25% to that to give your dragon some ability to climb and you're looking at a total thrust of 15000 N. Given that in level flight migratory birds like geese have thrust to weight ratios as low as 0.05 having a TWR of 1.25 should make your dragon a quite capable and aerobatic flyer.

To put that thrust in perspective that's slightly less thrust than the Messerschmitt Me 262's two engines combined. While your dragons still put out a lot of thrust, unlike a jet engine where the thrust is concentrated in one location, that power is going to be dispersed over the full area of the 50ft (15m) wingspan.

Getting caught in the downwash of your dragon's wings is going to be noticeable but isn't going to do any structural damage.

The dragon flapping its wings generates a shockwave that pushes stuff over with pressure equal to 10 pounds per square foot. Looking at engineering charts suggests that's equivalent to windspeeds of about 65 mph.

Well that's assuming you are right next to the wing as it flaps. The shockwave will disperse as it travels further from the wing. So you get at most 65mph winds. Likely much less.

How strong is 65mph wind? Well here is a loud man in a wind tunnel to demonstrate.

It seems 70 mph won't take you off your feet if you lean slightly forwards and 65 mph is weaker than that. Note the man in the video is bald. That makes him more aerodynamic and better at resisting winds

Maybe 65 mph would knock you down if it took you off guard. The dragon would have to sneak up behind you and then take off suddenly without you noticing. 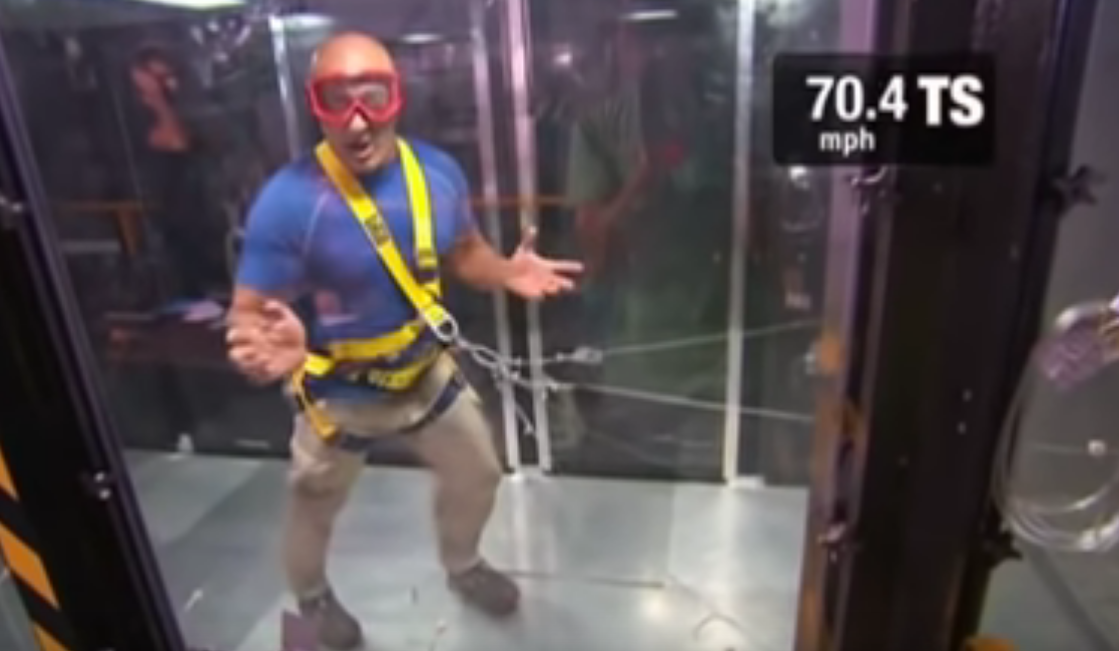 Daron has done a splendid job of showing the calculation for mean force and mean windspeed. - But the dragon's not producing force continually, there's an upstroke, then a downstroke.

If the up and down strokes last the same length of time, then 120~ Mph "gusts" would be generated. If a downbeat is sudden and done with full force, then that might be doubled easily knocking over any nearby soldiers and cavalry. Of course, they can just get up again.

If, however, the wings are brought together in the front, back-edges meeting first, then the front tip-ends cracking together like a whip - this would result in a narrow, directed air blast and a supersonic crack proportional in magnitude to the size of the dragon's wings that executed it. Enough to deafen and disorient humans for several minutes, possibly enough to weaken and shake apart doors and other obstacles. I'm not suggesting that any damage should be done to horses here, but you could if you wanted.

If it wasn't so, they would not be able to leave the ground.

And if when they grow their wings grow slightly less than their bodies, it makes sense that the adults are less able to fly than the youngsters.

Not the answer you're looking for? Browse other questions tagged science-based dragons flight wind .

15
Weapons for Long-armed (Winged) Dragons?
19
Could this Very Specific Dragon Fly?
8
Could a dragon use hot air to help it take off?
5
Can my heraldic dragons fly?
7
How do my dragons hunt?
2
Best handheld melee weapons for dragons to use?
8
Respecting the square cube law, what are the material properties of the structural parts of a massive dragon?