Does it make sense for my "zombie" to drink blood?

I'm working on another arc for my story saga, and one of the characters is a "zombie". I'm putting "zombie" in quotations because he's actually the result of genetic experimentation that ended up body-swapping him into someone else's body. He's in the body of a female zombie. I'm making note of him being in a female body in case that's important.

Zombies in my world are generally smart as the average person, but their mental functions deteriorate rapidly with age. So, my character is a guy who was put into the body of a girl and turned into a "zombie", and he's still sentient.

The main thing I'm here for is one of his main features: Because he's technically "undead", his body can't produce new blood (his heart doesn't beat at all so he grew a new organ to pump the blood through his body). He fights a lot so naturally he loses blood a lot. My solution for this was to make it so he could consume the blood of his victims to replace what he lost. I've taken blood type into account and it made him an AB+ Blood Type so he can receive blood cells from anyone.

I think I have this all figured out, but I feel like something's missing. Does this make sense? Am I straying too far from what zombies are supposed to be?

Minor edit for clarity: He doesn't digest the blood as food, he uses it to replenish his own, like the recipient of a blood donor, only it's not a willing donation lol

science-based biology humans zombies
Share
Improve this question
edited May 1 at 15:26
Ivory
asked May 1 at 14:59

The Stomach is not the Bloodstream

Animals that eat blood don't use it to replace their own blood. A vampire bat's fangs don't connect to its bloodstream. In fact they don't connect anywhere. The bat licks up the blood into its stomach. The stomach digests the blood to break it into sugars and proteins that are reassembled when needed to make more bat blood. They might be reassembled to make muscle or skin or organ tissue as needed.

The process is not fundamentally different from digesting other meats. Any carnivorous animal can digest blood. There are many types of tasty blood sausage. 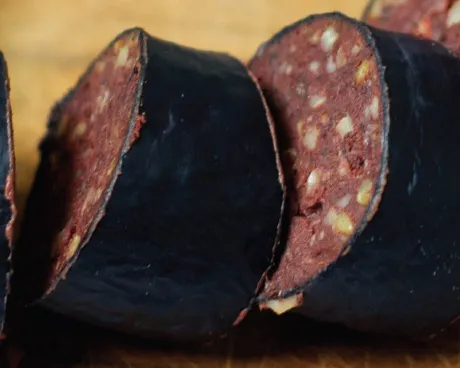 The only difference is the bat is specialised to eat only blood. So it can get more nutrition than you would from a cup of blood. And it will do fine on an all-blood diet, whereas you will suffer from malnutrition if you don't eat your vegetables too.

Interesting Fact: Some Inuit people have a mostly carnivorous diet. They eat meat, fat(blubber), and blood. They do not suffer from the sort of malnutrition one might expect. This is suspected to come from eating some raw meat and drinking raw blood. This preserves some of the carbs and nutrients that are destroyed on cooking.

Interesting Fact Fact: Or so the story goes, "Eskimo" is an Algonquin word that means "raw meat eater".

You have invented your own creature. Name it!

And more power to you! This thing that your character has become has elements of other monsters but is its own thing. I encourage you to name it a new name, so potential readers do not make assumptions. "Zombie" has come to mean Night of the Living Dead zombie, not the older Haitian voodoo zombie. "Vampire" has been thoroughly coopted as well.

Perhaps the thing your character has become is a made thing. Maybe these entities are named after the instutitions that made them, like a Chevrolet or a Mazda. There can be different models. Your character is a Model SUNY, or just Suny for short. Different models have slightly different features but are generally meant to be compatible. There are of course custom jobs and aftermarket mods.

Maybe they were invented like Replicants in Blade Runner for hard offworld jobs, and so are supernaturally durable. Maybe they have plugs or access ports through which they can obtain blood. It was originally planned that they get synthetic blood as planned maintenance but things have strayed pretty far from that original plan.

A lot of fictional monsters often appear to contain the elements of more than one monster. Your particular creatures sound a lot like nosferatu, a variety of vampire that looks particularly ghoulish. But it doesn't matter if your fictional monster is a vampire, or considered a ghoul or zombie. Readers will recognize the elements of the monsters in them and follow the general understanding.

HOWEVER, for worldbuilding, the real question should be "How do my creatures feed off of blood without digesting it?" and the answer is to have a pressurized system to create suction through syringe-like tubes inserted into the victim's arteries (veins are really much less preferable - no jugular, go carotid!). For a predatory creature, this would like like - fangs.

Yes, fangs. A separate use for a bite. Bypass the stomach, pump the blood directly into the blood stream or a secondary chamber that then pumps it into the circulation. And YES, this is very vampiric. If you want, they can have some OTHER means of extracting blood, but passing it through digestion will NOT get those intact red cells circulating in the blood.

Call it a ghoul, vampire, or zombie, but they're all dead and need to drain life to live. If you don't make it yourself, don't digest it.

In my opinion, (modern) zombies are difficult to get right. By modern zombies, I mean everything post-Romero... undead zombies that attack and consume the living. (Classic zombies, the singular enslaved person stolen from his grave by a warlock/sorcerer... well, best to not even attempt those unless you're willing to do your research).

The trend has been to try to scientifically explain zombies. They are still alive, though their biology has been altered. Maybe by a virus or other pathogen, or even a toxin (or a nanobot!). Even if you can do that and do it well, it robs the zombie of what makes it a compelling and disturbing concept: humanity's inability to do something about it or to understand why it is happening. Zombies are supposed to be inexplicable and incomprehensible. Inexorable.

That makes for difficult story-writing though. So what can you, as an author know about zombies? Well, they're not the only kind of undead. Of things that can definitely be called undead, we have at least two other varieties: the classic vampire, and the classic (animated) skeleton.

At least one of these is known to consume blood. So yeh, it could make sense for zombies to drink blood... but not for the reasons you provide. The undead consume the flesh of the living for reasons largely unknown beyond that they "hunger" for it. It's related (though perhaps not directly causal) to others also becoming undead. Maybe just because when they are gored, they tend to die... and in some mythologies, people who die (or those who die because of the undead) become undead themselves. Or maybe it's because the undead are contagious somehow... but not in the modern sense of the transmission of pathogens. A different, more primitive concept of contagion that almost resembles defilement.

Does a zombie need to pump blood? Why? If your zombies look anything like modern movie zombies, there is zero circulation going on. The sorts of decomp those exhibit is active/advanced, often even into "dry remains". No blood could flow in such a corpse. And if it did flow or need to flow, how could slurping it down into the stomach then send it out into arteries and veins? Nothing larger than molecules of fat passes through into the circulatory system... often, many important medicines must be directly injected because the digestive system destroys those.

I suggest that maybe you've confused two different tropes. Instead of the zombie trope, you want the "mindless drone" trope. It works to accomplish many of the same elements you are pursuing. You get that brainless hivemind vibe from it, where masses of (seemingly unthinking) people can form an inescapable mob. You get the horror of people imagining becoming part of it themselves, and losing their personalities in the process. But, if your main character needs to be a thinking person, he could "wake up" from it. And be the individual caught in that mob, trying to hide and hoping none of the other mindless drones notice.

Obviously these two tropes are similar, but the latter doesn't have all the baggage of hundreds of years of mythology and folk tales that the former insists upon and that everyone is familiar with.

Not the answer you're looking for? Browse other questions tagged science-based biology humans zombies .

20
What would be a realistic, competent response from the rest of the world if Britain were wiped out by a zombie virus?
9
Anti-zombie warrior squad
27
How to import zombies into America?
8
Can you impale someone with a spine?
28
Hallway cannon, the last way out
2
Designing long-term, non-magical zombies
23
How to design an advanced deadman's switch for the "vitality impaired"?
7
How Do We Protect Humans in a Zombie Society?