Would a hollowed out world be mechanically stable?

I am working on a universe where humanity has expanded across the stars. Humanity has access to a Dyson-Sphere-like technology level (1). The Capital is not the Earth anymore but Mercury. To build giant collecting stations around the Sun, Mercury was hollowed out. Only the upper solid layers remain (see the illustration below, where the liquid outer core and solid core would have been removed). 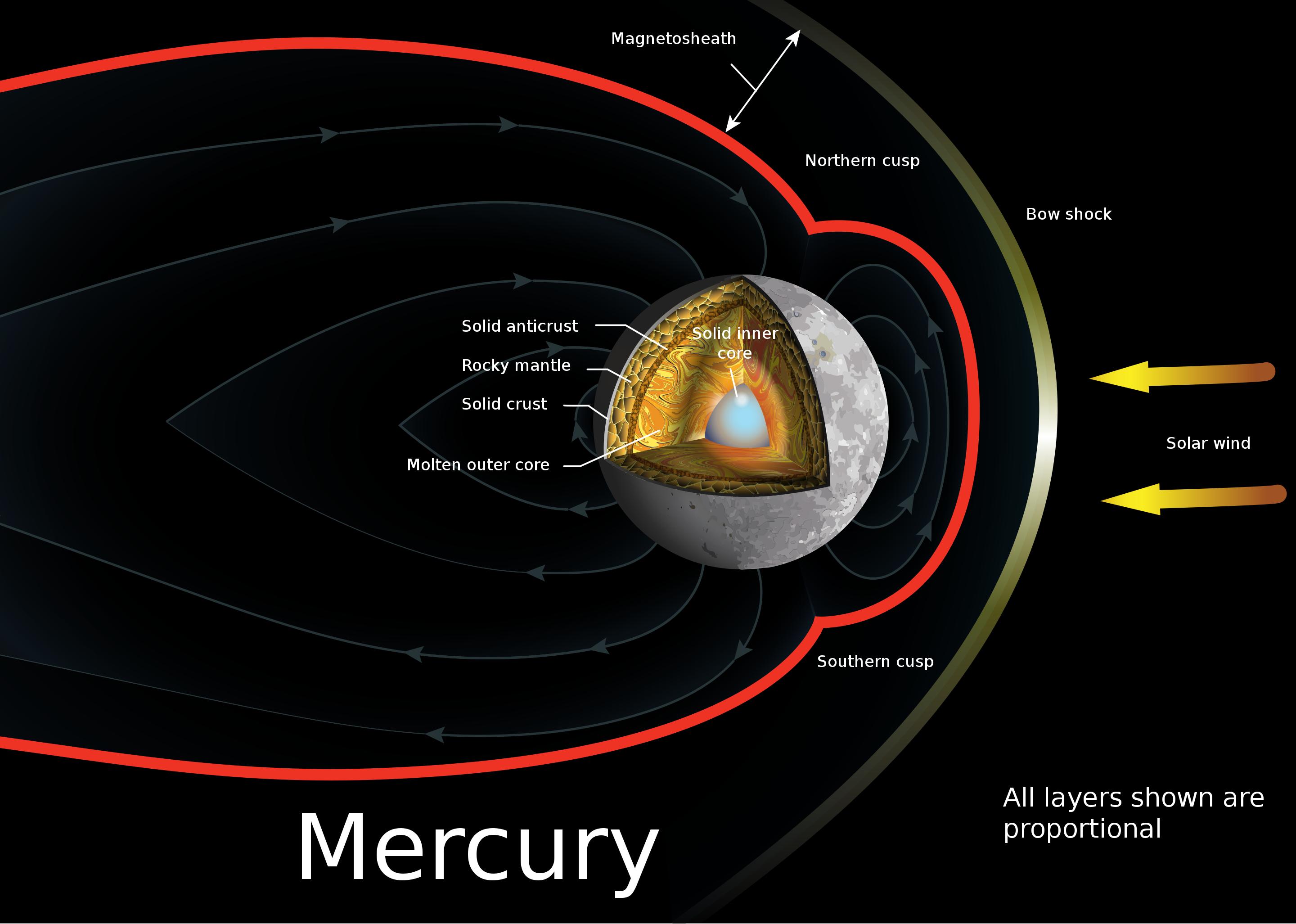 This makes for approximately 750 km of solid rocks. There would a giant entry that would lead to the city inside Mercury and various smaller entry points.

Would such a world be mechanically stable ? Would it blow up into pieces ?

There is no atmosphere maintained inside the space that was carved into Mercury and the biggest entry would be about 100km in diameter.

(1) by that dyson-Sphere-like technology level I meant that there is a Swarm of sollar collectors, but not only very thin panels like Freeman Dyson theorized, I meant massive (~1km in lenght) collecting stations that would send the energy back to various places (I have not yet decided which method of energy transport I would use) with swarm of reflecting satellites like the ones proposed by Dyson around them. I have set this requirement in order to not restrain myself to imagine potential structures.

space space-constructs
Share
Improve this question
edited May 2 at 8:04
Elyo
asked Apr 30 at 15:47

In theory a perfect and homogeneous hollow shell is stable, because its spherical shape ensures that the inner tensions are balanced.

In reality, due to the inevitable small local inhomogeneities and to the tidal forces caused by the Sun and other bodies, the shell will deviate from the ideal form and will probably start oscillating.

Though the thickness of the shell being 3% of its radius seems quite sturdy, I think in the long run the oscillations will cause fractures in the shell and it will end up collapsing on itself.

It will collapse, a world needs to be by tiny before it can be self supported, small enough it is unlikely to be a sphere to begin with since planets are sphere because gravity is sufficient to crush them into one.

the lower limit is about a 600km thick ball, so the crust is too thick all on its own before you even consider how much there is of it. that is any given section of crust is already too massive to be self supporting.

We would reinforce and carefully balance the shell as material is removed. We would provide active balancing if needed. Perhaps something vaguely like: https://en.wikipedia.org/wiki/Tuned_mass_damper

Perhaps just as interesting is what we would do with the vast bulk of iron, silicon, carbon, and other elements mined from the planet core. Hollowing out Mercury means we are using that material for vast constructions. Would we keep the planet surface, or build an artificial shell? What are we building with all that material?

No, but it does not matter.

First of all Mercury is a planet, and by definition it means hydrostatic equilibrium, meaning its shape is supported by internal pressure.

So if you start to hollow it from core or something, it may begin to crumble. Hard to say what are the limits here, how much you can to hollow before it starts crumble, where is safe to start, how the whole situation will look like and what is the best way to do that hollowing if there is a way to get to that an orange peel situation.

Another thing is that we can measure tensile strength of a crust, there was a video on youtube, no links but it was quite exciting stuf, and it turns out that tensile strength of earth crust is in range if few MPa(while for rocks on its own it hundreds of MPa) - it not compressive strength, but it still quite telling how broken and imprefect the crust is, so its compressive abilities will be a also greatly reduced(in many ways, more than just strength). And also we have tidal effects as well - also hard to say anything affirmative here, but the situation does not look good, and it even if there is a chance to get to it as a result of that hollowing process, which by itself is not looking good.

All that does not matter that much if you like to keep Mercury exterior, there is a way, even if there is not much reasons for it(except idk science, or humanity inheritance or something of that sort)

You setting a situation when you have to process a lot of meaterial, converting it from oxides to stations, metals, constructions etc.

In that sense covering the whole mercury with a shell, may be even part of the process, as means to extract and transport materials, so as means to use available energy(not such a great reason, as surface of energy extractors has to be much bigger than mercury surface area) or just to keep the surface enterior(I mean setting it as a goal directly).

To keep surface from crumbling - you dig down as as deep as thick the peel you wanna have, and then you build a shell(start fro shafts, a grid of them, supporting structures, prepare it to make a shell, then make one, internally), which(shell) you pressurize. And to prevent the thing to "fall" you have studs and build internal efel tower like constructions(studs connecting studs - do not know how it is called in english)

You excavate, hollow the planet and use part of material to build up those studs structure, which purpose is not holding the surface(pressure supports it, and bears the main load), but to negate instabilities and prevent the core to slide/ start to move/ to surface. You reduce pressure over time (in some way it goes down on its own as hollowed volume grows) as you need less pressure to support the peel, reducing of the gravity. (In reality you will need to pump some gas, and in abundance there is only oxygen from oxides, and at some point remove excess of it. Oxygen has some problems, but if one has to not that there aren't solutions for the problems)

Negating tidal forces and dynamics may be not an easy task, and hard to tell if it is sufficient to hold the peel after the end of the process, but at least it more viable than just hoping it won't crumble this or another way at this or another point in time while processing of the planet.

Advices are few, but before that - sufficiently good direction for a setting, congratulations.

I would recomend to calculate the energy(or rather power to keep the process) which is required for the process(any basic aproximation will do, also expect losses, 10-30% efficiency isn't bad), and then surface area of energy collectors, to have a comparison for the planet surface.

Another one is to imagine some process(as model) of this mass extraction, whatever you will be able to come by, and look at velocities of matrials in bottleneck points (like launching gates and volume areas next to them, aka(maybe) equators) a planet even small one it is quite a significant volume and velocities to be moved by. - by that I mean definig factor here will be not an exterior, but how to do things, and suprisingly there anren't that many ways for it. And a llanet scale extraction, requires planet scale construction. If you start otherwise, you will hit handwavium later and it won't be that good. So start from what has to be done, and then how it can be done, and then the last how it will look like and then you may get a more realistic picture.

So far I haven't seen any shell proposal, and I mean a natural shell as result of hollowing, which gives something which artificial constuction does not give better, and when a shell of asteroid or a semi planet makes sense more than a constructed shell. Asteroid miners are shy and it can be understood, they do not have enough guts to imagine at the scales it is required for their settings, but in your case, you are bold enough so go all the way - how it should be done, and not that petting play with space, space is big and it requires big things. Need a shell for a planet - no problem, flatten it and build a proper one in a proper way.

There was more, but I forgot for now, but basics - what has to be done, what it takes it to be done, how it can be done, and then after it all how it looks like. It not necessarly an easy task this way, but it possible, current technologies and alike are sufficiently enough for it, so they can be referenced.

Things for suport the process they have to be big, and space allows it to be big(not necessarly big in volumetric size, but more like surface area, number of units(which also is more like 2d scaling) etc. There are problems scaling things just by volume, so it is more like a 2D scaling of things - area, number of them, 1-10's-100's cubuc km structures packed with small stuff - a big factory as an example - so in that sense there can be big things, as we percieve them, but it only if required. Current technologies all can be placed in a cubic km size - if need higher volume of production just have more of those as units.

But big 1d and 2d structures are necessity for the process. So 1000's km long, 1000-100000 km2, few km3 - those can be regular units. And it should not impress, especially in microgravity, it not like we haven't done things in million's of km(railroad stuff as an example) (not sure it is millions of km, forgot exact number, but it was quite impressive)

Not the answer you're looking for? Browse other questions tagged space space-constructs .

20
What is the largest 'hollow' space structure that can be created?

15
Designing cities inside a hollowed-out asteroids
5
What would happen when an artificially-sustained miniature star could no longer be sustained?
6
Avoiding Violation of Causality with Stable Wormholes
68
How would an astronaut conclude he's on Earth, but 600 million years in the future?
4
Creating a viable/stable Alderson disk
21
How big would a satellite need to be to block out the sun?
26
Can a habitable world exist that would orbit in and out of a nebula?
7
Alcubierre warp-lanes, what is the most stable way to create them?
5
How Close Can We Build Solar Collectors to the Sun?
38
What would happen to a star if most of its energy were reflected back at it?