Like any reasonable billionaire, I want to breed dinosaurs on my private island - big ones. Like, T-Rex big. Of course, one needs a well-armed security force to guard such an endeavor, lest the merchandise escape and begin devouring tourists at will.

However, I'm also the sort of billionaire who loves experimenting with things, and I've also noticed that it's really hard for people to carry around big, heavy, long-ranged, powerful rifles capable of killing beasts like a fully-grown Tyrannosaur. You also really don't want your anti-dinosaur weapons to have the recoil of, say, a .50-caliber anti-material rifle - it bruises the collarbone, you know, and makes it harder for random tourists to use those weapons after the security forces get eaten.

As such, I've decided that my security forces will be armed with - as per the title - automatic shotguns that fire miniaturized anti-tank munitions. Reasonable thing to do, really. My choice of shotgun is the Saiga-12 - nothing out of the ordinary about that, either. However, my choice of ammunition is somewhat less conventional: I'm going hunting with FRAG-12 ammunition.

Shooting FRAG-12 rounds out of a 12-gauge shotgun has a lot less recoil than shooting big bullets out of a big gun (don't ask me why, I leave gun stuff up to my chief of security). Miniature anti-tank munitions are also much cooler than boring old bullets, so they're clearly the better option.

The question: does the shaped charge of a FRAG-12 armor-piercing slug have enough penetration capability to stop a T-Rex if shot at its head or heart?

Enough to P*ss it off:

A 12 gauge shotgun shell, even one filled with high explosive, is a relatively small projectile for anti-vehicle weapons. If I'm reading the specs right, it's actually a tiny rocket that extends the range of a shotgun shell. Then the shaped charge is designed to punch a tiny hole in a hard, metallic surface on a vehicle and destroy the vehicle. In theory.

The Frag-12 is a very small shell compared to the equivalent recoilless rifle rounds. It allows a shotgun user to potentially take on a vehicle with a shotgun rather than a more conventional rifle with an armor-piercing round. If you have a shotgun and need to stop a car, it might cut a small hole in some part of the engine that is vulnerable.

But dinosaurs aren't made of metal, and a shaped charge is good for making a fairly small hole in something. I think this would injure a dinosaur more than a regular shotgun shell, as the explosive force rapidly spread in the soft tissue and burned the dino. It would probably hurt like hell.

But military professionals who want to stop a vehicle will pick a bigger round than this if they have a choice. These rounds are considered pricey for the bang delivered and your link doesn't lead to actual evaluation results. Further, dinosaurs aren't made of metal, and the shells will detonate on impact with relatively soft materials like hide. If I'm reading the guide right, it's also unable to operate at close ranges, so once anything smaller get close, you're pretty much screwed.

If you're going to try and stop a charging T Rex, I'd go with something with a little more oompf, like a 40mm grenade launcher designed to attach to an assault rifle (perhaps the AR-500 ). This gives you the standard option of bullets with a heavy backup and a bigger impact.

I fear the frag 12 will just make it angry.

Do you know the term Elephant Gun? Calibers like .600 Nitro Express or .460 Weatherby Magnum. Those are what a hunter needs to face an elephant or similar animal, and to bring it down with one well-aimed shot.

But poachers did't use such expensive, specialist gear to bring the African Elephant close to extinction. They used assault rifles. If you talk about an automatic shotgun, you are clearly going the spray and pray route. The goal isn't to bring the dino down with a single shot from a Saiga, the idea is to bring it down with a burst. Possibly with shotgun slugs rather than pellets.

The problem with that is what happens between the moment of the mortal injury, and the actual death. The dino might still be able to munch a couple of security guard while it is bleeding out. Do you worry about things like that? 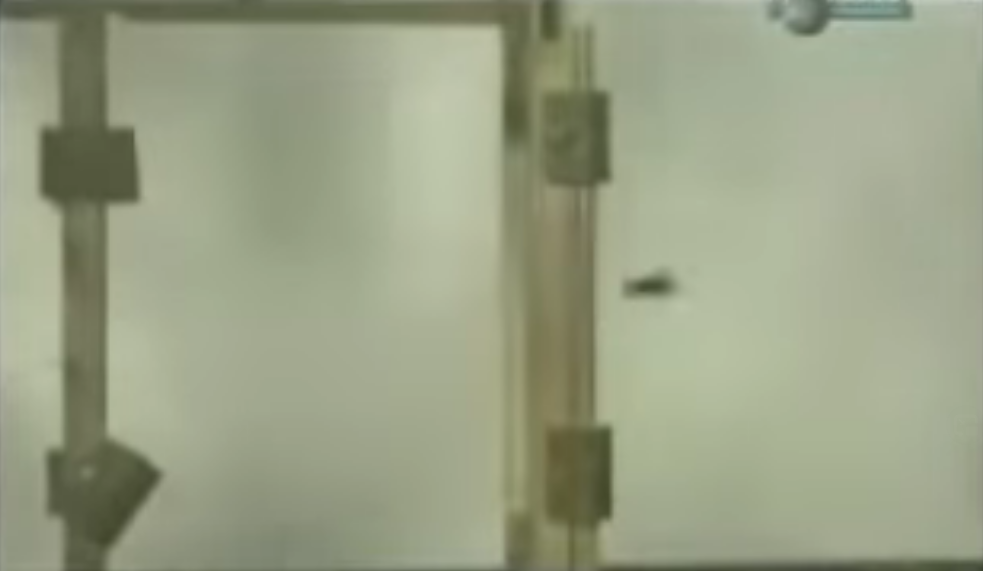 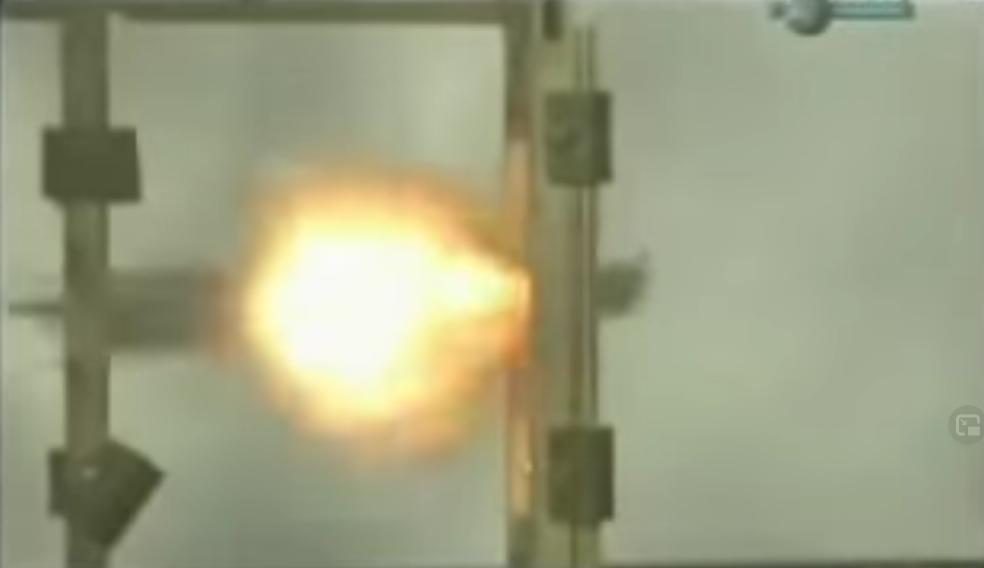 This is the only image I can find about what these rounds do when fired. For scale the round in the top image is small enough to fit inside a normal shotgun casing.

The explosion looks about a foot deep into the target. Of course this target is different from a dinosaur. In the pictures we have a steel plate and then empty space. In the dinosaur we have space full of flesh and bone.

I'd be worried that since the charge is designed to encounter a steel plate, punch a small hole, and inject the explosion beyond the plate, it would explode wrong when it hits a wall of flesh. Worst case most of the explosion is projected backwards and wasted.

The round will certainly open up a large wound on the dinosaur. Dozens of shots might lead to the animal dying of blood loss a few minutes later. But it doesn't look like something that will make the animal fall down dead.

Do such things exist in the real world? Probably not since historically there was no need to develop a rifle round for dinosaurs. They are a sci-fi staple however, and do things like "splinter on impact, tearing through light armor and inducing profuse bleeding".

That sounds similar to the FRAG but with a different shaped charge that -- instead of making a small puncture wound -- makes a wide superficial wound and sprays it with jagged shards of metal and non-clotting agents. The goal is to make the dinosaur die of blood loss in 30 seconds instead of a few minutes.

You don't need a shaped-charge bullet to kill a dinosaur. Regular armor-piercing ammunition will work.

Sure, maybe a dinosaur has too much bone and meat for a normal, jacketed lead bullet to do the trick, but how about a steel or tungsten-cored bullet?

m955 is a common AP rifle round used in the US, and it can go through a quarter-inch thick steel plate. Sure, dino rib-cages and skulls are tough, but are they tougher than steel? I kinda doubt it.

These would be very effective.

Doing my own research and definitely not stealing from Daron I got these pictures:

The FRAG12 shells would explode on impact with the T-Rex. Unlike the picture however the explosion will not need to expend energy eating through the metal, and will instead immediately start expanding inside the creature. This would likely make a larger hole.

An explosion like this inside the body doesnt just dig out flesh, it also heats up the flesh around the wound. This does not cauterize the wound, it flash-boils the water in the cells and bloodvessles nearby and causes them to burst. It also sends out a shockwave that also rips soft tissue like bloodvessles and the burned flesh, causing tears for blood to seep through.

With a foot or more depth these shots would be extremely powerful. Especially considering the T-rex width of about 1.8m.

While not every shot will immediately hit its mark, the sheer shock to tbe system it causes will likely incapacitate the creature. Also something that cant be understated: its an AUTOMATIC shotgun. I would say that any 5 hits would almost guarantee an incapacitation or kill unless you are actively trying to keep it alive.

You're going to face the inherent problem of guns: The shooter faces the same energy as the target. Modern heavy guns are about at the limit--some people take injury from them now and the very biggest have an appreciable risk of a broken shoulder.

Thus an anti-dinosaur weapon won't be a gun. Think RPG or grenade launcher, although with a warhead optimized for taking down dinosaurs rather than armor.

6
Using depleted uranium ammunition in handheld guns?
16
How would a lack of smokeless propellant affect WW1?
6
Making a Plasma Gun that works
4
What single or two materials are suitable to fit inside of a glass bullet to make it explode on impact?
4
Could missiles replace guns at the personal level?
2
Weapons that are highly impractical for infantry use IRL but more practical if wielded by something stronger or larger than a human
4
Using dead bodies for material 4: ammunition