In a desert made of sugar, what would happen if it rained?

The next setting I'm working on is a desert made entirely of sugar. It's unclear how this came to be, but it's created a unique and bizarre landscape.

Something I've been considering, is what might happen if it rained there? If we assume the sugar is endless, what would it look like during a rainstorm? And what would the aftermath be when it clears?

Edit: To give a more specific question. Sugar is soluble and breaks down when water is added to it. I guess that's why I'm wondering about how it would look if it rained there, since the water would breakdown.

Second edit: Thankyou so much everyone! I really wasn't expecting such amazing answers, it's really given me a lot to think about. I am 100% adding some geothermal caramel geysers, and I'm currently working on the seasons which will revolve around sparse rain and how it impacts the dune sugar (a sticky season, a brittle season etc). Thanks again!

It would behave, on a much larger scale, like a bowl of sugar that you sprinkled water on.

If the rain falls at a rate where it can be absorbed into the inter-granular spaces, it will create a stiffened layer, kind of like snow that has gotten soft and then refrozen. The depth will be a function of the amount of rain.

If it's, as you say above, a downpour, the wet sugar will melt completely. The resulting solution will be absorbed into the top layers of the less-wet granules, forming a kind of concrete. This layer would, in future rainstorms, form a first line of resistance, channeling most of the water into low-lying pools. From there, it would eventually dissolve through the hardened/sealed layers, forming an especially thick lump in the low-lying areas.

That, of course, assumes the sugar is initially in a granulated or powdered form, presumably from the same type of mechanism that creates sand.

Much the same, just sweet rather than salty.

The same as with those the addition of water to the sugar will form a solid crust as it dries that can then be quarried in slabs and blocks for transport and sale elsewhere as salt is from salt flats in the real world, if you have anyone in your world who likes sugar.

How will it look while it rains? again, much the same as the salt flats in rain.

It has to be assumed that the same conditions that allow salt flats to form and persist exist for your sugar desert, or it would simply cease to exist with the first rains and your question would be moot.

If a land itself is targeted as a food source by some animals, it may be soon by covered by animals' remains. Rocks, stones and sands may be formed on these minerals.

Depend on the frequency of raining days, if there is not enough evaporation of water, then the land may become a swamp. Algae flourish in this environment.

Otherwise there must be some specific reasons why there is no animal on the land (around a volcano? high atmospheric pressure?) It's a good food source.

Keep in mind: yes, sugar dissolves in water. Everybody knows that. But imagine this scenario: you have a glass of water, and you sprinkle a tablespoon of sugar inside. Stir until it all dissolves. Then you keep repeating and repeating and repeating this. You will eventually get to the stage where water has reached its saturation point and will not dissolve any more sugar. So it won't be as if the rainstorm will wash the entire desert away. The saturation point of sugar in water will also change depending on temperature. For more information about this, I would suggest googling it.

Another thing: if this is a desert, it might not rain that much. Of course, this depends on what kind of desert you have.

It would largely depends on how much sugar and how much rain. Some people have brought up it would be like rain in a salt flat, however, this is more twards the extreme of virtually no water. For the other extreme you might want to check out the Dead Sea 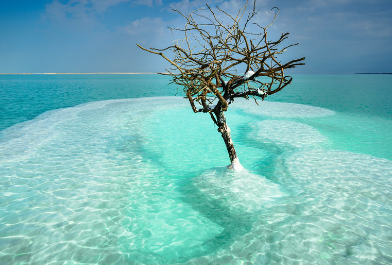 which is a body of water near Israel that is in a perpetual state of max saturation. For one, swimming in this water is odd because you float way way more than in regular salt water to the point where you would struggle to submerge yourself if you wanted too (you don't cause the salt would burn the piss out of your eyes and nose).

In the case of sugar you would also achieve a max saturation point eventually and due to its crystalline nature it would prob form very similar formations near the shore line. The bottom would most likely be very hard w/ a squishy silty layer of sugar that is right on the boarder of dissolving or coming out of solution due to the temperature of the water.

The main 2 differences would be:

If we assume the sugar is endless, what would it look like during a rainstorm?

Its not so much the endlessness of sugar but rather the ratio of sugar to substances the sugar can dissolve in. The Oceans of earth have 38.5 quadrillion tons of salt ... but since there is more water than salt its all dissolved. If the ratio was skewed the other direction you would have crystalline surfaces of salt (or sugar) with puddles of water that are in a perpetual state of evaporating and being absorbed (think of a salt shaker in a place with extremely high humidity).

Another aspect would be ... what about wind? There would most likely be erosion due to wind as well as water. You would most likely get dust storms of powdered sugar and rain drops that contain trace amounts of said sugar dust before it even hits the ground.

And would the aftermath be when it clears?

Again, I would prob reference the shores of the dead sea: 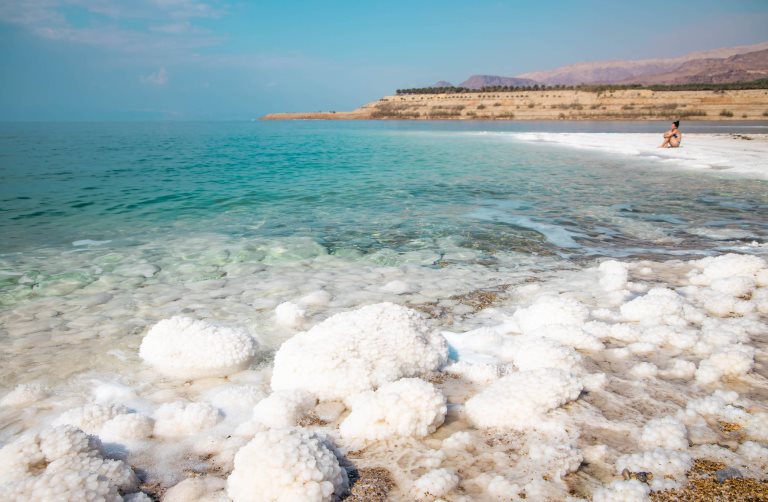 This is Crystalline salt that is left along the shore as the water evaporates out of the salt. A very similar thing would happen with sugar ... though there would be much more life attempting to devour it.

I would highly recommend considering the water cycle as a whole instead of just what happens when it falls from the sky. Also, the microbiome of the place (all the bacteria) would be insane. You would have billions of strains of bacteria waging full scale war on each other with all the free energy laying around.

Not the answer you're looking for? Browse other questions tagged deserts .

1
What kind of house could someone make in a snow covered desert?
9
Rocky desert or Sand desert - Which would appear in this scenario?
7
What could cause the desert?
0
Would this region have a desert?
0
Would agriculture be possible in desert regions before the Roman Empire age?
10
Would a large delta allow my desert people to feed a continent?
29
What would the temperature be like in a black desert?
8
What geological processes could form the Crystal Desert on the planet Thra in the Dark Crystal?
4
Would large enough equatorial continent produce a central desert through sheer size?
1
what I need to make mirage to constantly occur in sand desert?