Could a Massive Freshwater Lake and River System Exist in a Desert Environment?

In my book series, there is this lake called Lake Pheron. Lake Pheron's surface is located about 2,200 feet above sea level in a mostly flat, inland area called the Tangolian Desert. This desert is bounded by mountain ranges only a couple hundred miles at most from the lake to the north, west, and south, but the desert goes on for another almost 2,000 miles to the east and 3,000 to the southeast before transitioning to the Tangolian steppe. The area of the Tangolian Desert where Lake Pheron is has a climate most similar to the Sonoran Desert around Phoenix, and the desert generally gets cooler and drier the further southeast you go, only getting slightly wetter again near the edge of the Tangolian steppe.

Lake Pheron is absolutely huge, around the size and depth of Lake Superior in the United States, and supplies the otherwise desert area immediately around it with fresh water for drinking, irrigation, and other uses, making the otherwise desolate wasteland one of the agricultural powerhouses of the empire that controls this area (the Aurean Dominate). Lake Pheron is fed from a massive underground aquifer that sits around the large depression the lake occupies.

Lake Pheron is also one of the sources of the massive Pheron River system, both the longest and widest river on the entire Planet of Aurea. The most important of these rivers, the Pheron River, originates from the icy peaks of the Monsaltu Range that bounds the Tangolian Desert to the north, and flows southwest through the desert for a couple hundred miles before a tributary of overflow from Lake Pheron joins it, greatly increasing its size. The river then flows south and southeast past the lake, picking up many tributaries from the Imbreus Mountains bounding the desert to the south, before turning east and flowing through the scorching heat of the Tangolian Desert for around 2,000 miles before converging with the Hsia River in the Tangolian steppe. The Pheron River then flows another 2,000 miles through the remaining steppe, forests, and grasslands before emptying out into the ocean in a gigantic delta.

The Hsia River, which I mentioned above, has its origins in the Great Eastern Mountains, a slightly smaller mountain range a hundred miles or so to the northeast of Lake Pheron. Once it comes down from the mountains and into the desert, it flows roughly parallel to the Pheron River without much input from other sources before picking up the Gyumala, a large tributary, at the edge of the Tangolian steppe before converging with the Pheron River about 100 miles downstream.

Both the Pheron and Hsia Rivers are about as wide and deep as the Amazon for most of their length and don't pass through any super steep terrain until you get far enough upriver to get close to their mountain sources, so the entire system including Lake Pheron is navigable by ocean-going ships, and the Pheron River System has evolved its own freshwater versions of many marine creatures, most notably tuna, penguins, sea lions, fur seals, true seals, sharks, dolphins, and what we would call Japanese spider crabs, all of which can be found as far upstream as Lake Pheron and beyond.

Is it plausible for such a large freshwater river and lake system to develop in a hot desert environment such as this, or would the water evaporate or salinate before this could happen? 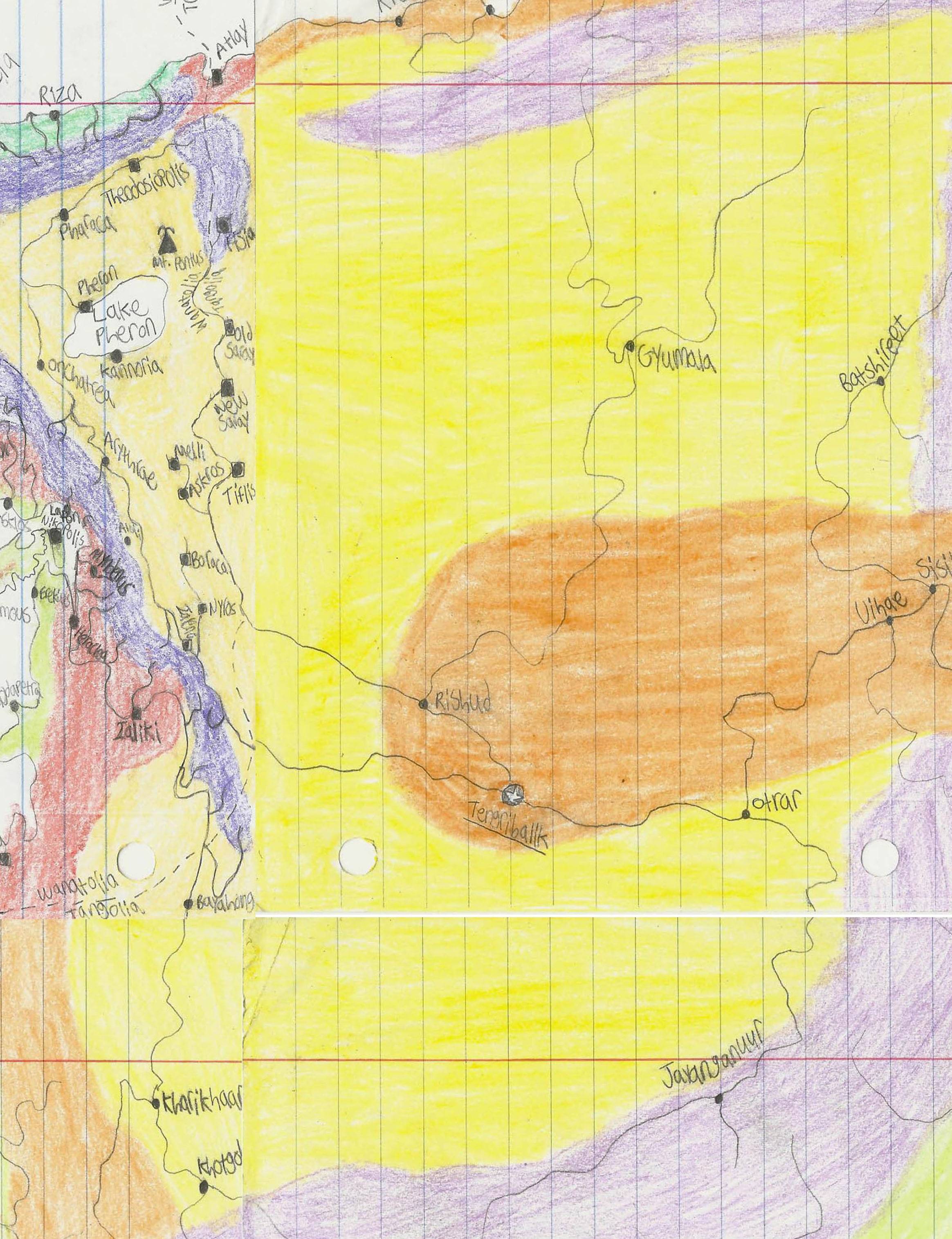 Map of the Tangolian Desert and surrounding areas (yellow is desert, lines are rivers, the dotted line is a provincial boundary of the Aurean Dominate, the purple areas are mountain ranges, orange/red areas are steppes, and Mt. Pontus is Mt. Monsaltu now because this clunky map is outdated but it's what I had to go with because it's the only one I had of this area that shows rivers)

Yes, this happens all the time

Here is a possible conversation explaining it in your book:

In real world, Rift Valley lakes in East Africa can give an idea on how a lake and a river system can be formed in a desert. One of them is Lake Turkana which is the largest permanent desert lake in the world, however it is an alkaline lake. On the other hand, there are two freshwater desert lakes in the same series of lakes, Lake Baringo and Lake Naivasha.

They are called rift lakes. A rift lake is formed:

as a result of subsidence related to movement on faults within a rift zone, an area of extensional tectonics in the continental crust. They are often found within rift valleys and may be very deep. - Wikipedia

Here is a cross-section of the East African Rift Valley:

What makes Lake Baringo and Lake Naivasha freshwater is that the lake water seeps into the faulted volcanic bedrock, taking the salts with it. Other reasons can be less rate of evaporation and more rainfall.

However, you can possibly have a larger freshwater desert lake in a bigger rift, and with surface outlets where salt deposits are carried away.

Not the answer you're looking for? Browse other questions tagged reality-check water deserts water-bodies rivers .

6
Effects of a river that flows through the air to a desert mountain?
7
How would a half-steppeland, half-desert kingdom with only a single river function?
0
Would this region have a desert?
3
Can my preindustrial civilization control an artificial water flow on the scale of the Mississippi?
3
Do rivers pass through a mountain range?
10
Could a river civilization develop in a cold desert climate?
16
How to Supply a City on top of a Vertical Cliff?