Why would a society be matriarchal instead of patriarchal after the development of agriculture?

My (admittedly limited) understanding of why most human societies became patriarchal basically is that as people developed agriculture and the resources to defend themselves, power shifted to men as they were physically stronger, as well as the fact that men can reproduce quicker and with less energy than women (why polygyny is more common than polyandry).

I was wondering if some other factors involved would lead to a matriarchal society instead. My society is an underwater civilization of merfolk if that would influence any potential answers.

Once the young male elephant leaves the herd, they join a small band of other bulls. These bachelors will stay together and look for food, water and potential mates.

Unlike a female elephant (cow), a bull elephant does not form tight-knit relationships with other elephants...

Merperson society is run by females because the males leave at adulthood. The females and the children are who remain. That is the society that is responsible for civilization. That is how it works with the elephants. The matriarchs are the ones who remember and the ones who order society.

The male merman goes off into the ocean at adulthood. He becomes large and fierce. He hunts for his food as his ancestors have for the millenia. He may associate with some other males for a while. Memories of childhood and community gradually fade. He remembers where to find the females. He knows when he comes looking there will be a fight with the other males who have come looking and that is why he has become large and fierce. If he wins, he will mate, and he will leave.

The children stare when the victorious bull comes through the gates. He might say something to them if he remembers how to speak.

You can't trust a merman with government

Mermen are not spotted often, lots of humans have never seen male merfolk.

The reason for that is mermen don't go anywhere near the shore, they prefer deeper waters, staying longer underwater, moving more slowly. There's a lot of them, but they are not involved in main stream merfolk culture and politics, which is all run by mermaids. Mermen are like growing up teens. Always playing games, they take care of raising their sons to enjoy their free time.. the only obligations a merman has to the community is to provide offspring, and hunt meat. But the mermaid will prepare dinner.. all the work except the hunting is done by mermaids. Mermen don't organize things, because you can't expect them to get organized themselves.

The status of men and women in primitive societies is directly related to their economic power. Political power is the consequence of economic power.

Whenever big game hunting and/or animal husbandry is the main food source, then the society has a strong tendency to be patriarchalic, because in human societies around the world those activities are mostly seen as men's work.

When crop planting, gardening, food collection etc. are most important, then the status of women is much higher.

Also, war-like societies have a strong tendency to be male-dominated for obvious reasons.

If there is gender dichotomy in your merpeople society, economy should be such that the role of women is more important than the role of men. In case gender roles in your society resemble gender roles in homo sapiens societies, then I propose that in order to be matriarchalic they should be peaceful rather than warlike and rely on aquaculture and seafood collecting rather than whale hunting.

Cloud of Sperm and Eggs

men can reproduce quicker and with less energy than women

For merpeople, having children has equal biological cost for both parents. Each releases a cloud of gametes. 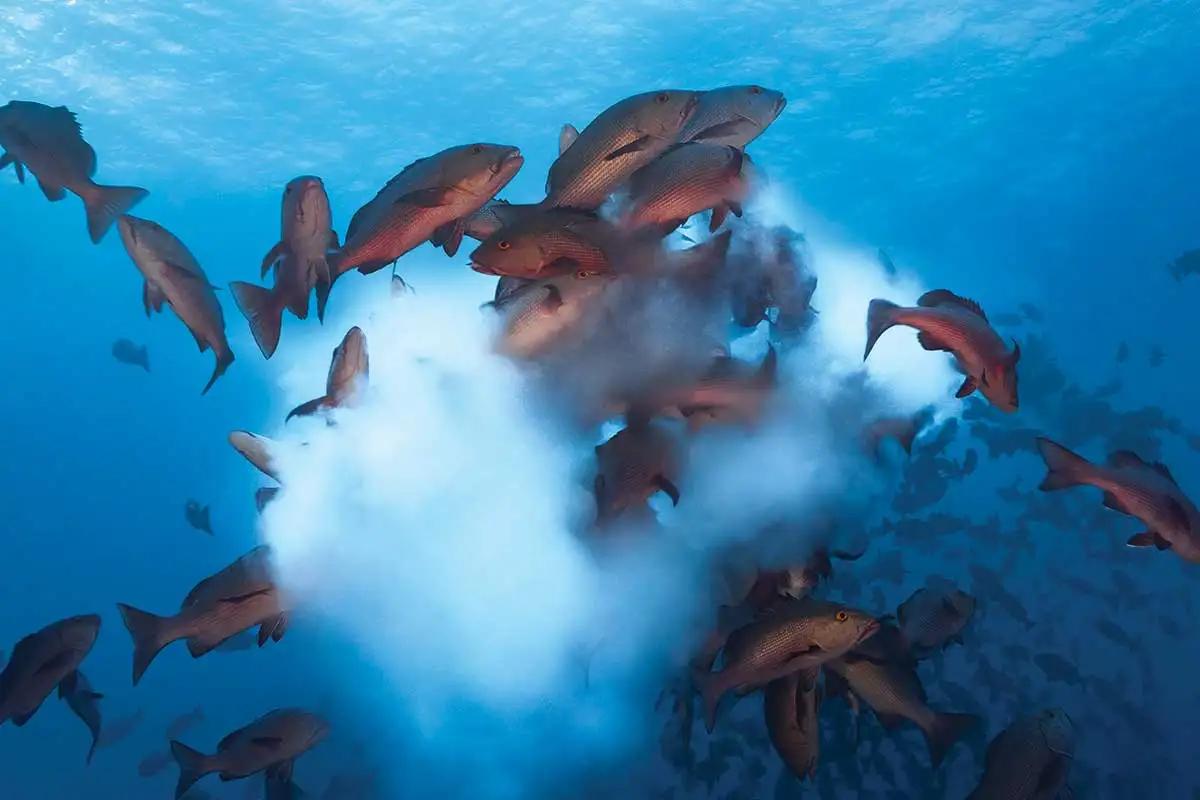 Another idea is both parents suffer a burden from reproducing. They both carry the young. In seahorses only the daddy has a pouch. 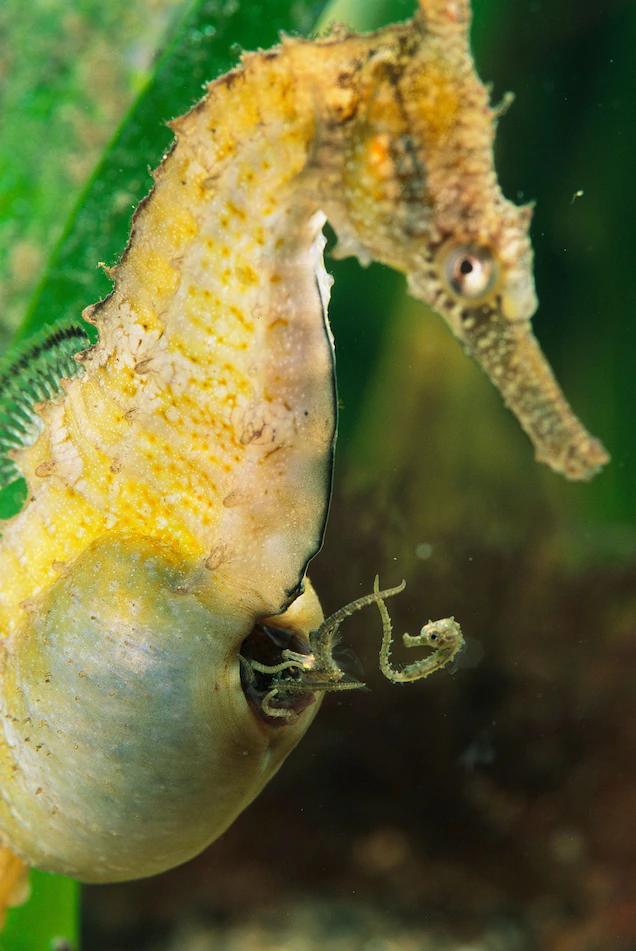 power shifted to men as they were physically stronger

You are free to decide which of the men and women are bigger or stronger.

Whenever you need an explanation for a cultural quirk, religion is a good reason (just like archaeologists call many things they have no idea what they are ritual object). So, what's the people's religious belief?

Let's start with empowering women. The people believe in women being life-givers, and that all their main gods are female. As a result, their priest caste is made up of only women, who act as vessels for the spot of the goddess during rituals.

Over the past 40 years the economic position of women has risen as first world economies transition from industrial production to the providing of services and ever expanding bureaucracy. Books such as The End of Men argue that numerous sociological indicators show that women are increasingly doing better in American society as men decline. This is attributed in part to changes in the economy that value feminine psychological attributes and punish masculine ones.

For instance, women do better in environments that demand emotional labor, deference to authority and tolerate immobility longer than men (this last one is important for children, as boys are punished more in school whilst girls are rewarded for a quirk of biology).

If you have a society that gives economic rewards and accumulation to a specific portion of society, than given enough time that group will become dominant over the group that lacks the capital advantage.

Your understanding is pretty on point. Men have very minor physical advantages that, in most communities, gradually compounded in periods where there was lowered environmental stress. In periods of higher environmental stress, societies become more egalitarian, because differences so small stop mattering, as you can observe anywhere from the rise of agriculture to the Great Depression and Second World War.

A bigger reason why humans mostly form patriarchies is that we cannot form matriarchies as a proper foil. If you look deeply into any human society that is said to be matriarchal, you will invariably find that it is actually near-perfectly egalitarian. It's a hard genetic limit, seen in not only humans, but chimpanzees (which are exclusively patriarchal) and bonobos (which are exclusively egalitarian). Our brains cannot do that thing, and the fact it is so logical that they should exist, but they do not, is good evidence of that. This is legacy from many millions of years ago, when our primate ancestors had significantly larger and stronger men than women, who could do dramatically more to defend their partners than the partners could do to defend them. Under their circumstances, never forming matriarchies was a survival necessity, and patriarchies have never been deadly enough to force an adaptation since then.

The reason human men tend to have minor physical advantages is because slightly less men have children than women. With competition, comes proportional increases in strength and height and etc, if those are the traits that lead to children. Matriarchal species are usually ones where less women have children than men, the most extreme example being hyenas, which are so viciously matriarchal that the women fight to the death on a regular basis and the men are basically chattel.

The subsistence crop is the young and crunchy tips of a fast-growing coral; the juicy polyps are eaten along with the calcium carbonate they have built around themselves.

This particular polyp reproduces through budding. At the end of the growing season, those polyps that have not been harvested for food (by breaking off the coral tips, in bulk, forcefully, by then men) are carefully extracted from the remaining tubes. The small buds -- several per polyp -- are broken off and will be replanted next season. The oversized, juicy, un-shelled parent polyp is a special treat, enjoyed at the harvest festival.

Crucially, the polyp buds grow slowly. Very slowly. And unlike grain seeds, they need care. They must be kept in moving water so they get enough oxygen. But they must also be kept away from all the small pests that would love to get them while they are unprotected by their coral tubes. This is not "storing seed corn in a granary" as we know it -- it's closer to caring for a child.

As a society develops agriculture, it has two choices as to who the caretakers are for the unplanted polyps. It can be the men (defined here for convenience as the subset of the population with greater physical strength) or the women. Caring for the polyps takes time and effort and energy -- a huge amount of it -- but doesn't require strength. Those societies where the men are caretakers are missing out on using the men's labor on other, less important but more specialized, tasks. So those where the women are the caretakers -- watching over the seed polyps while they prepare food, make clothing, and do other dextrous but not strength-limited tasks -- are economically more productive over all. So these societies prosper.

But power over the seed corn is power over the tribe. The watchers don't just assure the food supply for the next year, they choose when it is planted, how much is held back for next season. They choose what portion of the crop must be used for seed rather than eating. And they prepare the ritually-important (and also just delicious) harvest festival meal, whose bounty declares that there will be food next year as well.

Rather than on land, where the power to supply food for future survival goes with men (hunting, etc), in this world it goes with the women.

Well, the good part about writing fantasy is that you do not need to adhere to human standards. As @Daron suggested, you can have women be stronger, or they can be like bees and have a vast higher number of females and have males reduced to reproduction purposes. In such a society men would hold relatively low power, and humans would mostly deal with female merfolk.

You can have males die after they reproduce, in that case the society would be almost exclusively matriarchal with only young males in the society.

Have an extremely violent culture of raiding.

Both the vikings and the spartan men spent a lot of time away from home raiding people and taking slaves, and so women at home tended to have greater property rights and such because they were functionally the people running most of society while the men were off in far away lands.

If the mermen have a strong need to raid others to gather resources and go on long journeys women may dominate at home.

Not the answer you're looking for? Browse other questions tagged society civilization .

6
Gender equality in a fictional world
27
Male psychology in a matriarchy
1
Role Of Whirling Blades in Fantasy Society (RPG Classes)
3
Nymphs and Mermaids: Sinister Seas
32
Why would a matriarchal society practice polygyny?
10
How could a matriarchy develop while men are still the heads of war/military?
24
Why would civilizations have no major technological development even after ten thousand years?