Can the 1980s US government recreate a smartphone?

Inspired by this question.

A time traveller appears in two situations in the year 1985

The time traveller brought with him three iPhone 13s, charger included. He explained what he has brought and shows them how the phones work. He then gives three of the iPhones to each of them. He then disappears as mysteriously as he came.

Now, my initial question was how fast each of them could remake the phone, however, this time, I'm only asking:

Would the 1980s US government be able to recreate a smartphone?

Note: If you can answer both questiosn I would be very much pleased.

Below picture is taken from an infographic made by Intel to celebrate Moore's law's 50 years in 2015. 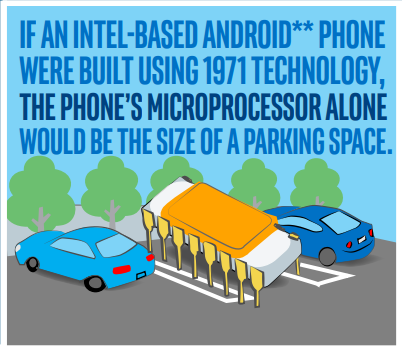 As a ballpark figure will tell you which huge leaps has technology made. In the 80's it was believed that 1 micron would have been the ultimate end of lithography and integrated circuits (today we are starting to produce at 2 nm, 500 times smaller than 1 micron).

Even the architectures used in modern chips were yet to come.

Nobody in 1985 would have had the technology to reproduce the electronic present in a current smartphone with the same size.

And it would take them about 35 years to develop that technology, which is exactly what has taken us in this real world, unless your time traveler has take along also all the detailed development history of the IC industry.

There would be tremendous time saving involved from reverse engineering the materials. A lot of progress of semiconductor technology was driven by the ITRS roadmap. There were a lot of wrong turn and false starts along the way. Just having examples of what is possible would have been tremendous. The characterization tools were more primitive then, but was advanced enough that they would be able to identify many key features on the device level. Equally important would be understanding the packaging, surface mount components, antennas, sensors , display etc.

Steve Jobs might not have access to the tools need to do that level of reverse engineering but several government and commercial labs at the time would.

In terms of recreating the I-phone, I think it unlikely that they would want to or make a serious effort to duplicate the I-phone as a useful item. Instead they would take what they learned and apply to issues related to national security, space and missile programs, as well as advancing science and commercial application. The whole concept of a flat display, high efficiency white LEDs etc would spawn whole new industries.

Now this question can be read in two main ways:

A. To this I would answer no, as I am fairly no one had the manufacturing quality to build such small transistors at the time, however the modernish smartphone may arrive slightly sooner, maybe around 1990, and not 1994 (https://en.wikipedia.org/wiki/IBM_Simon). However this leads us to the second interpretation:

A. Yes, if they try a lot they probably could make a VERY SIMPLE smartphone, think not an iphone but more like the Nokia 9000 Communicator but larger. As in 1980, both relatively portable computers existed (mcm/70 (kinda) and the Epson HX-20 would be released in 2 years.) and mobile phones (https://en.wikipedia.org/wiki/Leonid_Kupriyanovich) so one would simply have to glue the two together and slightly miniaturize them and voila, a smartphone. As a smartphone is: "a mobile phone that performs many of the functions of a computer" this would count as one.

Look at your smartphone. Then look at photos of the Apollo program guidance computer. Your Smartphone could run the whole apollo program and you would still be able to do stuff on it. That's the state of 1970s chip technology.

1981 was the year MS-DOS was released. IT technology couldn't even begin to comprehend modern programming, and the tools to make the chips and boards needed for smartphones were still in its inancy: motherboards for the 1982 C64 were quite efficiently laid out for the time but to a modern designer have tons of wasted space and only use one side and filled with components that everybody could replace with a soldering iron and tweezers... while modern smartphones have at least two sides filled with low space surface mount components.

How did we get to that miniaturization? We made more powerful computers that could assist in making the next generation. The whole design of the smartphone is very heavily tied to the presence and availability of many types of surface mount components. The whole idea of SMD was only starting to gain larger traction around 1986 and it took till about the mid-1990s for SMD to surpass traditional components. Even then, the components of the mid-1990s would still be oversized and not able to set up the power of the smartphone.

Oh, and there is the sheer impossibility of computing power. The latest smartphones have a computing power inching in on 100 Terraflops. Some years ago, that was supercomputer territory. The Cray-2 from 1982 had 1.9 Gigaflops. That means you'd need 100 000 Cray-2 to get one smartphone in computer power. Only the 1993 Fujitsu Numerical Wind Tunnel would get to a factor of below 1000. The first computer to get past 1 Terraflop was ASCI Red in 1997. All in all, our smartphones are as capable as a quarter of the 2004-2008 Blue Gene/L setup - which has the size of a warehouse!

You show up in the 1980s with a tiny spy camera, microphone, location tracker, fingerprint and face reader, all made in China. They're designed to produce commercial data that anybody from any country can search through with no kind of warrant. You say you want to get Americans to carry them around everywhere they go. (Even people on secret military bases!)

Just be glad they had an ACLU back then to stick up for Communist spies with abhorrent ideas. To think that those conniving Reds actually thought Americans would just lie down and accept such an idea, in exchange for some small graphic icons and an occasional wireless phone call!

Yes, but it would be huge. The USA did not have the ability to cram anything approximate to a modern smartphone's components into so small a space until this century at the very earliest, just because of the precision of manufacturing techniques. A lot of stuff would really confuse them, like the point of a touch screen when you can just have buttons for stuff, but I don't think it would have a particularly dramatic impact on computer technology at that point. Before the 1970's it would've changed things in major ways I don't know how to predict, but by the late 70's we had a pretty good idea what future computers would look like. The direction was predictable at that point, although not the physical limits. Things would be subtly different, and computers would've reached the current limits of smallness maybe 5-10 years ahead of us. They may or may not have solved the quantum tunneling issue by the 2020's, I have no idea, and cannot know until we solve it.

Not the answer you're looking for? Browse other questions tagged reality-check technology time-travel .

28
Would the US government of the 1960’s be able to feasibly recreate a modern laptop?

7
Will this approach work for a time traveler to recreate penicillin?
7
How can the army government ensure Mars mission success?
105
If 120 experts in 12 different fields were sent back 10,000 years, could they recreate the 21st century in 100 years?
28
Would the US government of the 1960’s be able to feasibly recreate a modern laptop?
31
How much tech advancement could be made out of modern processor appearing in 1980s?