Why would people finance the construction of a scientific headquarters on a remote island?

In the book I will soon attempt to write, a mysterious company will finance the construction of elaborate headquarters on a remote island somewhere in the South Pacific.

The island in question will be extremely remote and largely unknown. This island will be affiliated with no country and is presently uninhabited by man. I am not yet sure of the dimensions of this island, but it will possess a volcano, which will be near the center, subtropical forests and vast bleak cliffs. I believe there will be ruins of an ancient civilization somewhere on the island, but no one presently lives there.

The headquarters are be quite expansive and they will be placed on one of the cliffs. It will be at least a two-story, durable structure, complete with labs, a large kitchen area, private rooms for scientists to live in, and a storage area. Energy will be provided via solar panels. The headquarters will not only house scientists, but would be an adequate place to study, experiment, engineer, etc.

There is a dark, underlying, largely unknown reason the headquarters was built there, but the general public, along with most of the scientists involved, are under the impression that it exists for another purpose. The problem is, I cannot think of any good reasons to spend so much money to finance a base in such a remote location. Therefore, the "reason" for the base's existence would have to be based on the island itself and anything that can and must be studied intensely right there.

Does anyone have any idea for why such a base would be created?

Slight frame challenge. Do NOT tell the public why the headquarters is being built there, keep it covered under "company confidential information" or even "classified". The public will come up with all sorts of fascinating reasons for themselves ("Alien spaceship!" "Ancient civilization" "Nuclear testing"). Occasionally have an "insider" stir up some of the more outlandish internet sites so they speculate with their own crackpot ideas. Those who like conspiracies will buy into their favorite explanation while everyone else will just assume it is really a boring answer that nobody cares about.

If your real "mysterious" reason ever leaks, just provide some fake "proof" of the same to those sensationalist conspiracy newspapers & websites and let someone else debunk them for you.

As @automaton points out, there was also a requirement for at least most of the scientists to also be kept in the dark - however most scientists are very un-interested in the business side of things. Blaming it internally on "business reasons" or even "bad business reasons ... Manager X doesn't know what he's doing" will satisfy most scientists. Presumably at least one or two have to be in on the true reason and they can help deflect any colleague who speculates too much.

This is the same reason the Hubble Space Telescope is in space. It means you can look at distant stars without the atmosphere getting in the way.

If you're looking for a fake reason for the public to hear about, then you could always just say that the lab was built to study geological/geographic anomalies within the island's volcano, for reasons of predicting future eruptions or seismic events. Alternatively you could have your scientists studying the ancient ruins you mentioned (unless there's another plot-related reason why they wouldn't be doing that).

To skirt the law

I mean, this would be the official, public explanation. "Research on X is, sadly, illegal in our country, so we're building our lab elsewhere." The key thing here is that you lie about which laws you're trying to skirt.

Imagine that your real reason is so you can resume Mengele's horrific "experiments" (aka sadistic torture for its own sake). You don't tell people that, obviously.

It has become commonplace for professional ventures to willfully seek to defy the law. Since the most convincing lie has a kernel of truth, your best bet is to camouflage yourself as some tolerated variety of evildoer.

The facility is built to research a novel design for geothermal power using the volcano and sea water as coolant. If all goes to the supposed plan, the facility will be the core of a much larger development to follow. So really, a large research complex is a tiny thing compared to the small city that will be built there later to smelt aluminum with geothermally-generated electricity.

A large complex already existed here to support an air base. Until recently, it was off-limits to civilians. But it has a huge airport and hundreds if not thousands of abandoned buildings, so the expense is almost non-existent. The logic of the facility completely flips and the question becomes "why WOULDN'T someone have a facility here?" The scientific research could be environmental, studying global warming, marine biology, ruins long neglected with pent-up demand because of the government ban (this might even be WHY the facility was abandoned). Or it could have to do with the presence of the base itself - there is a large Aricibo-type observatory built by the military, or the research could be on hazardous materials like unexploded ordinance, chemical weapons, or biological stockpiles.

The research they are doing is so hazardous that it must be carried out far from civilization. Accidents could result in the death of thousands or millions, and the facility must be as remote as possible. A novel fusion power plant with potential to explode with 100 megatons of force, for example. Or it is a biological testing facility for deadly pathogens like Gruinard island and any pathogens must be kept isolated. Of course you need a sophisticated facility in the middle of nowhere!

The Island of Dr. Moreau:

The research must be done here because this is the site of a former research facility where cutting-edge research was being funded in any area you care to name. The mystery of why a facility is here goes from being a problem to a fun puzzle your researchers pursue. There is already an existing research facility there, and the researchers go to it to identify what the previous researchers were researching. This could be controversial genetic research, and the subjects of it now are wild on the island - the only place on Earth with the evidence of what went on. 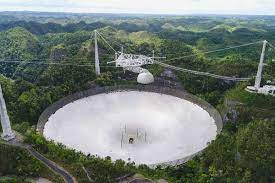 Current tests being performed on teams are being given a deal of interest in the international press, this has the unfortunate effect of disturbing the experiment.

For reasons of psychological authenticity, the suspension-of-disbelief must be maintained by all members of the teams as much as possible to ensure that stress responses are as close to genuine as they would be on actual missions.

The extensive test facility therefore excludes all public view so that the subjects are in no way "performing for the cameras" - which would alter the conditions of the test beyond what could reasonably lead to constructive results.

In terms of the heat and solar cycle, this would be at the warm-end of the tolerable range in contrast to the Antarctic habitat.

The reason for funding the experiment is clearly humanitarian - the long-term survival of humanity - thus justifying the armed security in fast boats patrolling the nearby waters, and the attack helicopters ready to greet any unwelcome peeping-Toms from the air.

Well, a typical Jules Verne style "explanation" might be just "an eccentric billionaire wanted it this way", which might still function quite well nowadays.

But speaking of a remote island in the middle of nowhere, it might serve two purposes (separate from the physical limitations / benefits described in other answers):

Now, concerning the key points from the question, the field of science can be anything more suitable for the plot. There is nothing particular in the remote location, as any kind of a remote location would work. Replace a tropical island in the Pacific with an outpost in the tundra or with a camp deep in the Amazonas rainforest, nothing changes.

The last point is interesting, spending money. I would think that with a lair of mad scientists, most of the money would go towards the equipment and the personnel costs. You'd have to spend them anyway. Now, in a remote location, supply chain might eat up enough money, but putting the research team on a big pile of spam (see Arctic or Antarctic expeditions, I simplify a bit) would already alleviate that. There is a nice add-on option, though, if the eccentric billionaire cover-up is not just a cover-up. The funding body might just own a fitting vehicle to ferry the supplies. For example, our eccentric billionaire just comes in his superyacht like each half a year for a visit to an elsewise unremarkable Pacific island, where a mad scientist's research lab just happens to be. And it happens that the superyacht just carries enough supplies for a bit more than a further half a year that miraculously dissipate after the visit.

An expedition found a crashed spacecraft or even the remains of a base of clearly alien origin on the island or in the ocean close to it. The technology is amazingly advanced and worth doing everything for. If the island is in the ocean the artifact can at most be 100 million years old. On the continental shelf, the artifact may be much older.

Maybe the humans aren't even in control. Something ancient and conscious is waiting in the ruins. Some scientists are reporting strange dreams...

The lab is for a neutrino detector

There is actually a real-life proposal for this. In other words, there really might be an advanced research station on a remote island in real life in the near future.

Neutrinos are incredibly difficult to detect. The most successful neutrino detector to-date uses a kilometer long ice-cube at the south pole.

Scientists have suggested that using the entire pacific ocean for neutrino detection would improve accuracy and sensitivity.

From there, it's pretty simple to justify why you'd need an advanced lab on an island in the middle of the pacific ocean.

It also needs to be away from people, traffic, infrastructure, etc. that would disturb the experiment, so it would have to be a remote & uninhabited (or mostly uninhabited) island.

You could have a combination of reasons. The first being environmental data collection, similar to what happens at Cape Grim, where atmospheric samples are taken to measure,

Another activity could be the establishment of a very sensitive radio telescope that needs to be in a radio quiet region, similar to the Green Bank Observatory

Add to the mix a weather observatory and research being undertaken on rare and endangered marine life in the region.

The island is remote and largely unknown ? You can bet there's all kinds of plants and animals that can't be found anywhere else in the world, or that are in some way different to the usual varieties found elsewhere (insular gigantism is a real thing).

As a bonus, it can give you some easy story prompts, where an amateur botanist stumbles into the dark secret while looking for exotic plants and tries to uncover more while evading the evil corporation, the story writes itself.

Not the answer you're looking for? Browse other questions tagged island .