This question already has answers here:
Can we 'beam' energy from the moon? (8 answers)
Closed 6 years ago.

In the year 2115 A.D. we have managed to cover the entire surface of the moon with cheap and flexible solar panels and have them bathe in the day, the energy collected will be stored at a lunar power station. My question is

Delivering energy at a distance requires something like a very tightly focused microwave beam, or a laser. There are several issues here:

Some of the other possible solutions are equally alarming, such as using the energy to send buckets of lunar dust down the gravity well to be captured by huge magnetic decelerators and converted to electrical energy (eventually there will be a lot of moon dust in Earth orbit). The high amount of solar energy could also be used to create anti matter, which is a very high density form of energy storage. Only a truly insane person would want to send large amounts of antimatter to Earth, much less Earth's surface.

Frankly, I see the best use of generated energy in space to be in space. Beaming energy to friendly receptors on spacecraft provides power without the spacecraft lugging around a heavy nuclear reactor or acres of solar cells. Space industry can also use large amounts of energy for refining regolith into it's constituent elements, manufacturing and agriculture in space.

As @Thucydides says, beaming energy to the Earth's surface is quite problematic. A way around this is to have a series of Space Elevators, perhaps a minimum of three, each of which has a receiver which is set up to be a target for the moon's energy beam.

The transmitter on the moon is programmed to switch between these: as the moon orbits the earth and the earth rotates, it will periodically shut off the beam, target a different receiver, then reactivate the beam. If there were two transmitters, this could be done without any downtime.

The receivers on the elevator tops convert this energy (transmitted as laser or microwave or whatever) into electricity, use some of it to charge up the batteries which power the elevator operation, and send the excess down cables to the earth. In this way, the moon is powering some Space Elevators and providing energy to the earth's surface.

Since the coordinates of the beam between the moon and the receivers are 100% predictable, it's easy to manage a "no fly zone" around the beam paths, in order that spaceships using the elevators don't get accidentally zapped by the beam.

It could also be managed so that the moon only ever beamed to a elevator top which was angled well away from the Earth, so that if there's some problem and the beam misses the receiver, it won't zap the earth. This might require a larger minimum number of elevators. It might also be a good idea to make the elevator currently getting the beam not be open to elevator traffic, again just in case of accidents. 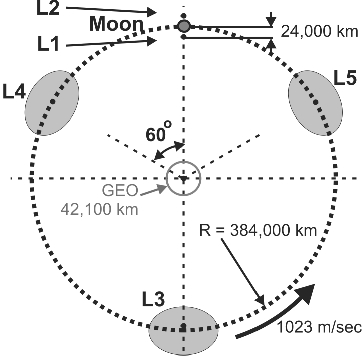 gives an idea of the relative scales involved, and looking at this you can see that you could get away with just three elevators, to meet the requirement of always being able to beam to one which wasn't in line with the earth.

For #3, and the reason to built it on the moon and not in free orbit, consider factories that mine the lunar regalith and produce solar power cells to pave behind.

So you want something that is made from the loose material on the surface, for the most part.

There are three broad approaches to solarvoltaic generation:

So what elements are present in the loose material on the surface of the moon?

Automation trumps efficiency of the units. Quasi-living nanotechnology that grows in fields like weeds on the Maria, even if only producing a small yeild, would trump high efficient silicon panels that are laboriously produced.

I like the idea of competition in a story. Tried-and-true moving factories making old-technology panels, vs. "farmers" of electric grass, trying to get the overhead of manual involvement down to the point where it pays.

Assume superconductors to move the story along.

Not the answer you're looking for? Browse other questions tagged hard-science energy .

14
Could the moon crash into the earth if we colonised it and increased its mass?
13
Solar recycling or: How to keep your star from dying
3
Solar cells in the Renaissance
2
Solar panels on rotating wheel space stations
3
Is it plausible to to cover a desert in self-replicating solar panels, using only the materials found in the desert?
6
Producing solar panels on Mars - what is minimal process required, and the mass to import it?
5
Verifiy the american flag from the moon
5
If the solar panels on a spaceship were able to convert gamma rays to electricity, how much more power would it produce?
6
Can mirrors on the moon allow solar panels to operate at night?