Could shocking grasp be used as a defibrillator?

A common trope among role-playing communities is that Shocking Grasp can be used as a defibrillator. Could a spell that allows you to shoot lightning from your palms allow you restart a recently stopped heart or re-regulate fibrillation ? Would this be more or less useful than a medical grade defibrillator?

Contrary to the television belief, defibrillators do not restart a stopped heart.

can a defibrillator restart a stopped heart?

If you go by what you’ve probably seen on many television shows and movies, then your answer would be “yes it can.” What you may not realized, however, is that television show are merely unrealistic dramatizations when it comes to using AEDs to revive people.

When the heart stops beating due to sudden cardiac arrest(SCA), resulting in a cardiac flatline, the flatline represents a lack of electrical activity in the heart. That electrical activity is one of the many keys necessary to a person’s survival. Much like a car needs a battery to start, a person needs an electric signal to function. Once a person’s heart has stopped beating, it is no longer contracting and pumping blood throughout the body to major organs.

A person in this condition will not benefit from an AED that delivers an electrical shock. Instead, the victim will need cardiopulmonary resuscitation (CPR) to keep their blood and oxygen flowing. EMS would follow this with an injection of a high dose type of adrenaline. A shock from an AED would actually be harmful in this case. Thankfully, AEDs are intelligent enough that they will not deliver a shock, knowing when one is not necessary, as in this case.

The only situations in which an AED is necessary is when the heart is experiencing some type of arrhythmia or erratic heartbeat. These can lead to sudden cardiac arrest (SCA) in extreme cases, though not all arrhythmias lead to such a serious event.

An AED will not bring someone back from a bad car accident or revive someone who has fallen from a building unless, in both of these situations, the person was still breathing before experiencing a sudden cardiac arrest episode.

If an AED can't do the trick, neither can a lighting thrown from one's hands.

And even for resetting an arrhythmias, you don't simply throw a discharge through one's body: AED's electrodes need to be applied in well defined locations to make it work. Again, not something a lightning attack can do.

Could a spell that allows you to shoot lightning from your palms allow you restart a recently stopped heart or re-regulate fibrillation ?

Trite answer: it is magic. Do you want it to be able to do that? Then it can do it.

It does rather depend on the level of control the caster has over the electrical discharges they're creating. From the wikipedia article on defibrillation,

A lightning bolt used as a weapon may have a much higher voltage (because the air between the caster and the target is a good electrical insulator, and you need to induce dielectric breakdown somehow) and may deliver a substantially larger amount of energy, assuming it was intended to blast and burn rather than simply induce fibrillation. 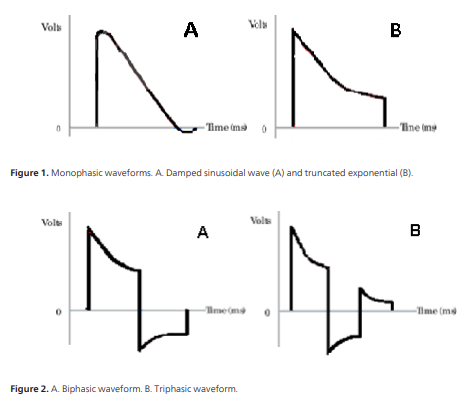 Source: Principles of External Defibrillators. There's plenty more there about the complexities of defibrillation... it ain't just zap and they're up and walking again.

Would this be more or less useful than a medical grade defibrillator?

Well now. I'd say that all defibrillators are "medical grade". If there were enough people who could generate a shock of the appropriate energy and waveform simply using physical contact, then they would be just as useful as the sorts of automated external defibrillator you see in various public and workplaces, because they could do the same job. Their relative usefulness would depend on whether someone who can do the shocking hands trick is easier to locate than an AED.

The big problem is generating the right shock. From the paper linked above:

Does being able to do the shocking grasp trick also give you the ability to mimic an electrocardiograph? It doesn't follow that it can. AEDs can do some relatively clever heart rhythm analysis before zapping. Manual defibrillators, as used by medical professionals, require skilled operators with a good ability to interpret electrocardiograms and decide upon the correct course of action. This is not a trivial skill... advanced cardiac life support practitioners tend to be of at least paramedic level, and paramedics are often trained to degree level with considerable training and practise before being allowed to use a manual zapper without oversight.

You should also note that the sort of advanced life support techniques used by paramedics and emergency doctors don't just involve zapping. For pulseless electrical activity, a kind of cardiac arrest where there's no pulse but there is detectable pulse-like electrical activity in the heart, you probably also want to be supplying a dose of adrenaline. Magically conjuring up extra adrenaline in a human body is definitely outside of the scope of zapping someone by shocking them.

It gets worse in circumstances of traumatic cardiac arrest, but this is drifting outside of the scope of the question. Even "mere" heart attacks require a lot of post-resuscitation care in order to keep the patient alive.

Clearly, the best case here is that shocking grasp might be equivalent to an automated external defibrillator, but it unlikely to be better, it can't work on all kinds of heart dysfunction, and it can't provide all the additional kinds of medical intervention that you might get from your local emergency services, both in the short term and once you'd gone to hospital.

Having put a bit more thought into this it seems even harder... EKG training can be done (to some extent) by looking at EKG printouts where you can describe to the student the salient parts of the cardiac waveform. In magic-land, if you're just kinda feeling the state of someone's heart, it might be difficult to record, describe or replay that feeling, meaning you have to learn to distinguish eg. atrial fibrillation from ventricular fibrillation by getting hands on with someone dying of a heart attack. And unless that's a very common occurrence, training a magic human defibrillator is going to be challenging.

So, without the required secondary powers of instinctively understanding electrocardiology without a lot handy dying people, shocking grasp alone is likely to be worse than a regular AED.

Attempting to hit the heart with an offensive combat spell is stupid.

Regardless of the elemental nature of the spell being similar, A spell intended for the killing and destruction of ones enemies would be MAGNITUDES above what is needed to act as a defibrillator. Even if you ignore the logistics of what defibrillation does (as Starfish Prime and L.Dutch have that covered), it is simply folly to assume that a killing spell would be suitable to use as a medical treatment directly to a heart.

This is what I would use to /kill/ rather than revive.

PS. From a DND perspective, a similar spell that would achieve the same result as a defib would be Save the Dying which stabilizes a creature. They are both Cantrips and doesn't require putting damage into an ally. If you are using DnD spells as your basis, I would imagine Save the Dying would actually do defibrillation if required.

Not the answer you're looking for? Browse other questions tagged reality-check magic medical .

63
Physically, how do dragons grasp and *transport* the contents of their hoards?
1
Cryosleep antifreeze, what possible materials could be used?
30
Could Finger-Fencing be Fatal?
22
Weaponising the Grasp-at-a-Distance spell
17
Could a simple hospital oxygen mask protect from aerosol poison?
4
Without advanced technologies, how good at biology could ruthless scientists be?