I have a character who wears a high-tech helmet with a high-powered laser mounted on it. Basically, the wearer “stares” at a stationary victim, and the laser is activated. The laser would take a short time (ideally a couple of seconds) to impart enough energy to cause the victim to explode.

A few obvious issues- the helmet would need to be massive and unwieldy, it would require an absurd amount of power (which would preferably be carried by the wearer), and the user is effectively staring directly at the beam’s reflection. (I’m planning to address the final point somewhat by making the wearer already blind.)

The wearer only needs enough juice to fire once or twice, but I’d suspect even that would require an extreme amount of energy. The wearer is willing to dump huge amounts of resources into building this helmet, but physical limits are physical limits.

Best case scenario, the helmet wouldn’t be much bigger than a motorcycle helmet, and the entire system (power and laser) would weigh less than 100 kg. This seems a bit optimistic, though.

This question may be too technical, but is it possible to make this work with semi-futuristic technology without making the wearer look like MODOK?

The laser would take a short time (ideally a couple of seconds) to impart enough energy to cause the victim to explode.

I have seen an industrial IR laser, used to vaporize metal, with laser power of several kW. It has a footprint of several tens of square meters of machinery and needs a hell of power and utilities supplied to be generated and amplified, and when fired on a chicken breast it carves a nice, round hole in it within seconds, but it doesn't make it explode.

To have an explosion you would need the laser to be absorbed inside the body and vaporize enough water to build up pressure and cause the subsequent explosion.

The closest thing to achieve this goal would be a microwave laser, basically a microwave on steroids. But I highly doubt it would be anywhere close to something portable and handheld by a single soldier.

I have worked with lasers that are used to cut and bleach jeans pants. They were in a power range much below what you need for a human exploder. They also needed large cooling systems, the kinds that have pipes running cold water.

Your laser helmet would require a connection to a cooling tower bigger than you just to keep you from cooking yourself while shooting.

As an alternative to your design, the helmet could be physically separated from the laser cannon. You stare, and a car sized thingamajib shoots at what you are looking. This way you only kill your victim, besides making it more feasible to power the laser.

Been There Done That Got the Laser Safety Goggles

The system you describe has, in form if not in power, existed for decades. Ophthalmology surgeons sometimes use a head mounted laser where the power and lasing machine are in a little box and a waveguide brings the energy up to the helmet and sends it out to the target.

These systems have two lasers, one generates a visible aiming beam and the other a visible or invisible death beam. Your user doesn't have to be blind, he just has to take standard laser precautions, such offering eye safety goggles to all his victims and announcing to them whether his laser is "on" or "off".

At present, the boxes are light, and some even run on batteries. Obviously these are rather low powered. Since you gave us the power of weasel words, semi-futuristic technology, the only real problem is that of power, which you'll solve in another question about miniaturisation of power components!

The helmet itself doesn't have to be heavy: the laser isn't mounted on the helmet, it's in the backpack. Even five to ten years ago you could buy on Ebay a small battery powered laser strong enough to light matches and pop balloons. Time marches on. Probably your kids will be able to buy one these death lazers third hand on Ebay in 15 or 20 years!

To complement the other answers, the power for your HKS (Helmet Kill System) can be provided chemically:

The Hydrogen fluoride-CO$^2$ (or deuterium fluoride-CO$^2$) laser is used, producing a wide range of wavelengths simultaneously. Tantalisingly the Wikipedia article doesn't exist yet for that specific type - but the reference states that several megawatts can be produced this way with just a couple of little gas-tanks to feed the reaction, like Uncle-Sam's beer-hat: 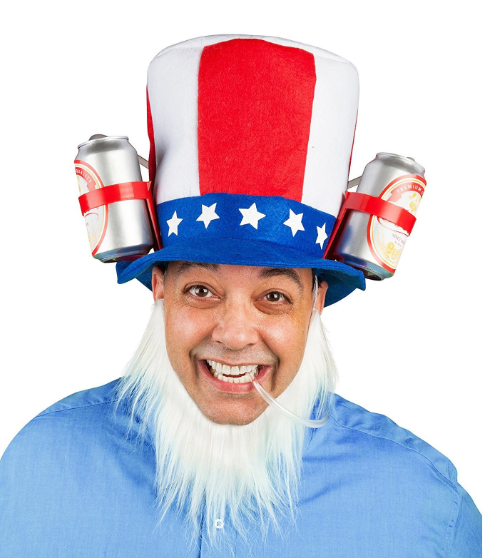 One of the big problems with energy weapons (like lasers) is thermal blooming. As you increase the amount of energy in your laser, the air (and particles in it) will absorb a portion of the energy, and when it does, things in the laser's path will change phase and become better receptors of the energy, so the laser ends up blocking itself to some extent. The problem gets worse if it is foggy or smoky. The only solution is to fire it in a vacuum, or in exceptionally clean air.

Additionally your laser is going to take more power than any 100kg source can currently produce, your future is going to need a lot of advanced mobile power solutions to make this feasible.

It's probably be easier to attach a mind control system, and then have it slice them apart. Just as deadly to anything but a flatworm, too.

Cutting lasers require about 80 Watts of electricity. 10S LiPo batteries get us over 300 in just over 2 kilos (5 pounds). Power, check. The rest of it should be straightforward, attach one of those and a laser device to a bike helmet, and the problem is solved.

The mind control and computer system can be installed semi-easily to the inside of the helmet, and weighs next to nothing.

This system weighs around 10 pounds (4.5 Kilos) plus the bike helmet itself and the attachment setup (Duct Tape?).

(Also, a laser can make someone explode. It heats up the water in their cells, and then the steam makes them blow up with the same concept as a water heater bursting. For that, just add a bunch more LiPos.)

The reflection doesn't need to be a problem when using pulsed lasers: tune some kind of shutter (can be LCD, mechanical, or something else) to the pulse speed so it's closed whenever the laser fires a pulse. The drawback is that your vision will flicker somewhat.

As for the laser power: as many others already mentioned, it just doesn't exist yet in that form factor. But what could work is having all the actual lasing be done somewhere else and have the helmet work as a beam guiding device. You have a few options then:

To improve coverage put the big laser in a lighthouse-like structure, or for indoor use add exit modules for the laser in all rooms.

I don't think recoil is the main reason we don't attach firearms to helmets.

Your proposal would be harder to aim accurately than a rifle is, unless the gun protrudes forwards enough to be visible to the user. Our idea of "staring" straight ahead doesn't seem precise enough, nor do our tolerances for angle disturbances when fitting a helmet.

This is more or less doable with modern technology 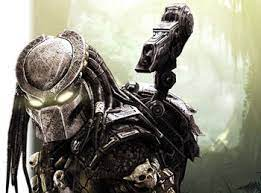 I read a US military study on this subject a while back that claimed, it takes a 1KW High-Energy Laser (HEL) to kill a person faster than they can get out of the way. It won't make them explode since that is not how lasers work, but it will burn into them causing surface level charring and raises their internal temperature enough to cause internal organs to boil and rupture.

Modern military laser systems like HELLADS weight about 5kg per kilowatt of power meaning that using military technology that more-or-less exists today, it is not unreasonable to assume you can make this a hand held anti-personnel laser.

That said, 5kg is a lot of weight to put into a helmet; so, instead I would mount this weapon on the back or shoulder and just ware the control mechanism on your head... basically giving you a weapon system very similar to Predator's shoulder mounted laser.

There are also newer styles of Solid State HELs that are more scalable the Liquid HELs that are being developed for use on drones right now which may actually be light enough to ware on a helmet, but their exact specs are not public knowledge. Regardless, HEL technology has advanced so fast in the past 15-20 years that if you are planning for an even sort of future tech scenario, then an anti-personnel helmet laser is not at all unrealistic. The only unrealistic part is the person exploding.

As for flash back, there have also been recent military research into "dark" lasers that reflect back self canceling wave patterns (kind of like how noise canceling headphones work) to significantly reduce how bright a laser strike is. Or you could just use protective goggles that filter out the reflected wave lengths since you don't seem too concerned about blinding innocent bystanders.

Not the answer you're looking for? Browse other questions tagged reality-check lasers .

7
What kinds of wounds would a laser weapon leave?

9
Using lasers to stop bullets
16
Merging helmet and skin
4
Gravitational lenses for focusing giant lasers
2
By what mechanism can lasers destroy an entire planet?
9
How to protect your ship against TW-range lasers?
18
Why wouldn't a space fleet use their lasers for a precision strike?
1
Plasma windows as justification for Free Electron Lasers?
1
Is it possible to have lasers that travel slower than light?