Understanding the universe as a 3-dimensional surface

When thinking about the shape of the universe in my story I have been looking into it being a 3-manifold. As I understand it, space would be a 3-dimensional surface and for a small scale observer space would seem flat but if somehow it could be viewed from outside its shape would be curved.

Something I am not able to visualise or probably that I don't understand is if there is a thickness which would be a much shorter length than moving in other directions? So if you moved across the circumference of the surface/shape you would either return to where you started or move in a seemingly endless path looping around the shape but if you moved at 90 degrees to the circumference, would it be a much shorter distance to travel and if so, what would happen there? Would space curve back on itself?

Two of the easiest topologies to imagine this surface on is a hollow sphere and a torus, in this image the surface of the torus would be 3-dimensional space time and the grey cross section area is the depth or thickness of space which I am wondering if it would be a much shorter distance to reach than taking other paths and what would happen to space when you reach there? 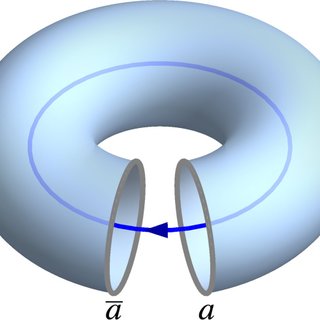 Edits have been made to the question to correct parts which were mentioned in the comments.

If space really is a 3-dimensional manifold (which is what most theories of physics assume), then its "thickness," in the sense that you're talking about, is exactly 0. Even if we assume that there's some direction which is perpendicular to all three of our ordinary everyday dimensions, it's impossible to move in that direction, because the amount of distance available in that direction is 0.

According to Wikipedia, string theory may predict that there are more than 3 spatial dimensions, and Wikipedia mentions two possibilities for how this might work. One of the possibilities is called "compactification," and my understanding of this is that space does have a thickness, but the thickness is extremely tiny (maybe a few picometers, I dunno). These dimensions would curve back on themselves, so if you were to move in the direction of the thickness of space, you'd quickly end up back where you started. 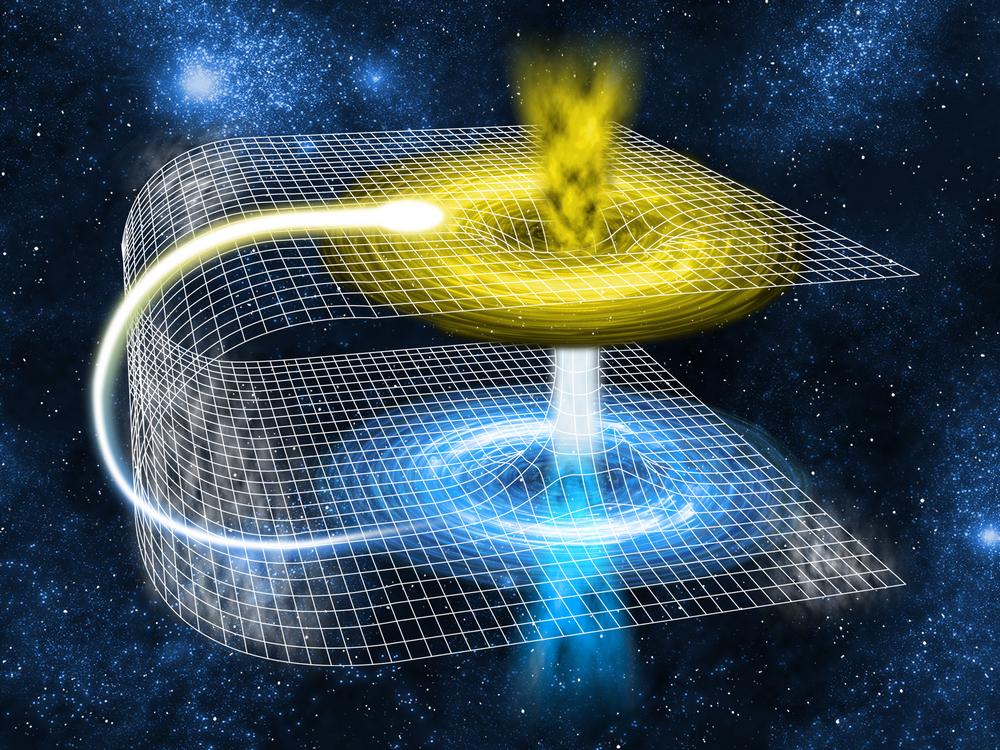 In the Sci-Fi Business, What you are talking about is called folding space. This is a type of mumbo-jumbo where we explain the existence of wormholes or faster than light travel by pretending the universe (three or four dimensional) exists in some larger space, the same way a sheet of paper exists in three-dimensional space.

Even though there is a speed limit on the paper -- hence a minimum time to travel from one corner to the other -- you can zip from one corner to the other if you have a magic sci-fi engine that bends the sheet to put the corners on top of each other. To creatures living on the sheet with no conception of the perpendicular direction, this would look like some sort of wormhole.

Of course this is all scifi mumbo-jumbo. In General Relativity the universe and its matter is described as a four dimensional manifold. There is a whole field of maths called differential geometry, which centres around how to refer to such objects using properties inherent in the manifold itself, rather than them existing in some larger space. Under this mathematical framework it doesn't even make sense to move in the perpendicular direction.

47
What would the periodic table of a 4-Dimensional universe look like?
6
Consequences of a two-dimensional universe on cells and life
19
What would physics be like in a wrap-around universe?
22
How to prevent your enemies from digging under you?
111
Would planets be cubic in my "cuboverse"?
4
What 4D shape could best fit a looping world?
5
How can I create an infinite space bound by another infinite space (or contained within it)?
11
Do stars work in hyperbolic space?