If the insects declared war, who would win?

It is the near future and insectoid aliens pass our planet. They are shocked and dismayed to find that disgusting fleshy creatures seem to be in charge.

Using their alien technology they imbue all of the insects on earth with swarm intelligence. This creates one enormous distributed super intelligent being.

The terrestrial insects realise that humans have for centuries been destroying them on a whim, treating them as pests or merely exploiting them. They decide to wage war.

Recent figures indicate that there are more than 200 million insects for each human on the planet. An article in The New York Times claimed that the world holds 300 pounds of insects for every pound of humans. Lists of organisms by population

Given that each of us is outweighed 300 times, they could simply swarm over us and suffocate us.

We have only our present day technology and certainly no magic, nor understanding of the alien technology or even what happened. Can the human race survive?

With no notice that this was going to happen, is there any way of fighting back?

Can the human race survive?

We're too dependent on them for our survival.

Humanity most certainly would notice something funky is going on. Food shortages. Price hikes. Economic instability. We'd be too busy trying to fill our bellies to unite and fight the insect-war.

To make matters worse, the bug hive-mind could play us against ourselves. For any two adjoining countries that really don't like each other, starve one but not the other. Wars will be waged out of desperation(read:hunger), pre-emptive action, or opportunistic attempts to get rid of people you don't like.

Once the governments have collapsed, there will be no organised resistance to the insect war. This is when they smother us.

Our countermeasures against insects works because they aren't coordinated. Much of what we do to prevent exposure of our bodies, food and assets works against specific pests. Screens over doors and windows work against mosquitos and other biting insects. Pesticides prevent crop destruction.

But, all of the things that we defend against can be undermined by a determined effort by a combination of species. (I'm going to focus my efforts on North American ecologies because those are the ones I know best.)

The easiest will be if the bees just stop pollinating crops. Without pollination, the world's food supply collapses in a matter of years. Perhaps sooner, if other insects and contaminate and destroy existing food supplies.

A great deal of the protection that we enjoy against insects comes from our buildings, specifically about 128 million wood-frame homes. Wood frame structures are ripe for attack by termites. Termites driven by a coordinating intelligence could avoid the bait and traps that we already place and focus their attacks on the structural wood. Attacks like this will require several months to execute so it may take a while before we humans see any results.

There are bees, wasps, and hornets everywhere. Generally they keep to themselves but if directed they could make an impressive area denial weapon. Attacking and stinging people as they leave their homes before they can reach their cars. Children will be kept indoors and people will leave only when absolutely necessary. Food shortages will start for people who go food shopping every day or every other day.

Mosquitoes are also an effective area denial weapon. Any flying insect, if there are enough of them can plug up the air intakes for automobiles or tractor trailers. Cleaning those filters is annoying and slows down the movement of goods.

Ants are capable of getting into very tightly enclosed places and chewing on things that shouldn't be chewed on. They are also capable of moving large quantities of earth, so it's possible that they could actually undermine the foundations of buildings. Attacks like this would still take time but perhaps not as much as expected.

Many insects have a painful or poisonous bite. With a swarm of attacks on a human, particularly the elderly or very young, biting insects can cause extreme illness or death. Ants can strip human bodies down to the bone.

Insects may not be able to kill every person but they could destroy infrastructure and crops that would prevent humans from eating.

There are some areas of the world in which most insects would have a hard time surviving -- deserts and near the poles. Though of course in the sub-artic regions midges seem to do pretty well every summer. A few humans could probably hold out in the arctic sustained by fishing etc. (i.e. traditional Inuit would be OK). There might be large enough oases in the desert to support agriculture (not insect-pollinated of course) while still being far enough from more hospitable regions to provide a barrier to significant swarms.

Get them fighting eachother.

Seriously, this is the kind of "what if" that doesn't go well for the question in search of answers. You have created an enemy that is:

These sorts of bad guys always pose ill for the question being asked. Taking on the infinitely strong bad guy never seems to work, short of asking Morgan Fre--- I mean "God" for a reset.

The easiest way to solve this problem is to simply leave the humans out of the equation. Whatever the solution is, over 99.9% of it is going to need to be implemented by the only entity that matters: the bugs. We could almost ignore the humans entirely and get to our final result. The humans can only pull strings in the background.

Our best bet is to get our special forces hats on. Instead of trying to combat the bugs, we need to turn them against each other. The special forces are trained to train others to fight... we'll need to do that here.

Step 1: Learn whatever language the bugs know. They clearly have one, because they're communicating. We're going to need to learn to talk

Step 2: Reawaken whatever primal feuds we can manage. The most important is probably the feud between ants and termites. As long as they are infighting, we might stand a chance.

Step 3: Spiders are scary. People are scared of spiders. Hmm... there probably should be instructions in step 3, but it seemed more apropos to point out that a reasonable portion of the human population is going to freak the bleep out in the first 2 hours of the assault. We might want to stock up on Thorazine to subdue the arachnaphobic. I'm just saying.

Well our bug bombs are pretty effective. We have chemicals that are extremely deadly and can be deployed from the air, from canisters or even by hand.

The initial attack would cause trouble. Assume massive human losses at the start. The bugs will have complications crossing the oceans, giving humans time to prepare. Once the pest killing machine gets rolling, the bugs don't really stand up very well.

If these bug aliens didn't interfere, then we would probably eliminate the mass without need for nukes or what have you. Even standard bombs and missiles would cause tons of damage anyway, the shock waves alone would nearly triple their potential if not more.

From there, the bigger problem is all the bugs are gone. The food chain is shot, animals die that rely on them for food. A great many species would also disappear or at least be crippled from the event. Maybe this was the aliens goal all along.

The reason why we haven't exterminated insects already is because they are needed for just about everything.

They are a crucial part of the ecosystem as well.

Let's say they all move to a portion of the world to wipe out a specific target: humans. They still need to eat and survive. It would be a battle of attrition against themselves because they would eat their entire food supply at a much faster rate than normal. They can't just not eat. They are small and can't store much energy. So they eat and devour everything in their swarming, then the land turns to desert. Then they move to another area, where they repeat the process, until they have cornered themselves and there is nothing to eat, no shade, and masses of insects die.

The ecosystem crashes and everything dies, just because they grouped together.

Some insects eat other insects. like the Japanese Hornet (#1 on this list I hope I never see one of these) 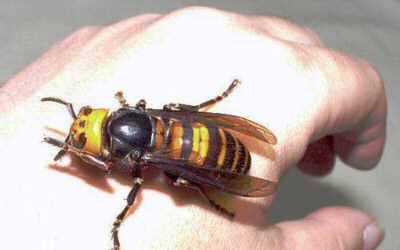 Those bugs can't just stop and say "Hey I am not going to eat you, because we are fighting these huge humans". Insects multiply faster than humans, I am sure that it will cause an increase in these types of insects as well, just to balance out the amount of insects in the area.

As far as Termites eating large homes, if they were in large enough numbers they could decimate a house or many homes, but then there is travel time, and we could knock them out in transit.

By the time that they eat all the 128 million homes (mentioned in another answer) they will have increased their numbers to an amazing amount, where they would be to a point that they would eat every tree for miles, and then they would die out because the ecosystem couldn't handle supporting them.

It all comes down to balance.

There wouldn't be balance, and everything would die eventually.

The way you have described it I guess..

But - Say we assume 'super intelligent being' is comparatively on par with our intelligence in the insect world and we have a fair fight.

We even have mind control. Search for cockroach. There is an app for it.

I don't think there is easy way to say who win this.

From one side, insects outnumbered us, but from other hand there are various type of clothing which protects us from any insects (at least in theory). In majority of homes, there are plenty insect killers sprays or other anti-insects weapons.

Insects, such as locust could attack our crops, but this is real threat even without super intelligent swarm mind. Locust is constantly under monitoring, its population is under control.

So people wont't be completely defenseless in this war. But from other hand, super intelligent mind having under control every insect, this is huge advantage for team Insect. Insects can win this war, but it has to be blitzkrieg. They has to win in first attack, because if humans will reorganize and strike back, insects will lose. In long run, humans have technology which allow them to completely eradicate all insects. Would be a Pyrrhic victory, it is different story.

The insects will definitely win

Not the answer you're looking for? Browse other questions tagged warfare humans insectoid .

34
What could cause humanity to migrate from land to water?
6
How can humans avoid killing any insect?
4
Could 3000 magically controlled insects kill roughly 1000 knights?

10
Who would win? Dinosaurs vs Mammals
4
The war between the North pole and the South pole. Who would win?
3
Would it be possible for insects to evolve colonies of colonies?
5
How would a collective consciousness go to war?
7
How to defeat the elven insects using modern technology?
4
How win a medieval war with air superiority?
6
How would Humanoid Insects Molt?
3
How to win a war with unarmed soldiers?