How much payload can a space elevator support?

I'm working on a project involving an interstellar society, and I'm looking to incorporate as much actual science and economics into the project itself since I'm a stickler for numbers and logistics. However, because I'm a stickler for numbers and logistics, I've found myself in a bit of a quandary as I've inevitably encountered the subject of space elevators as an efficient means of moving goods and people into and out of orbit. The problem I've encountered specifically is what payload levels could be moved into orbit along a space elevator, and the amount of power that would be required to sustain such an activity.

My question is this:

As I've mentioned, as much as I love science and technology, it's not a passion that I've pursued outside of creative hobbies such as worldbuilding. If you could break down the details in a somewhat comprehensible manner, I'd be ever so grateful. Thank you!

The maximum load of the elevator doesn't depend on your power technology, but your material technology.

Really, anything from 20 tonnes or a thousands tonnes or more is fine... handwave in whatever you want to suit your story needs. Lighter loads for lower tech levels, partially constructed elevators with only a thin cable that's still being expanded, higher gravity worlds, etc.

Specific orbital energy is the number to care about here. The important parameters are $R$ the radius of the planet you are lifting from, $a$ the radius of a geostationary orbit, $M$ the mass of the planet and $G$ the gravitational constant. $\mu$ is the standard gravitational parameter, $GM$. The amount of energy you have to expend to raise the lifter is defined as $$\epsilon_a = -{\mu \over 2a} + {\mu \over R }$$

For Earth, you'll have an $\epsilon_a$ of ~57.77MJ/kg. A hundred tonne lifter would need ~5.777TJ. If your lifter managed an average speed of 600km/h, you'd make the trip from the surface to orbit in a little under 60 hours, and need a steady power supply of about 27 megawatts sustained for the whole journey.

If fusion power is effective, compact and safe, you could fit a mini reactor to the lifter. Given the weight requirements, this seems unlikely unless you have a really substantial cable and a very large lifter of a few thousand tonnes or more. If fusion reactors are big and heavy and awkward (which is likely), you might keep them on the ground (or in orbit) and use laser or microwave beamed power to drive the lifters motors.

If you wanted a faster trip, you might be able to handwave one in given suitable power supplies, though cable friction is going to be a problem. Some kind of fancy superconducting magnetically levitated linear motor might work, but all that extra weight on the cable has to be held up by something...

Please also remember that you get one lifter per cable. if you want multiple lifters, you'll have difficulty fitting them past each other, even if the cable was very large indeed. Here's a reasonable artist's impression of a lifter. See how it encompasses the cable, and is quite broad in order to accomodate beamed power collection arrays: 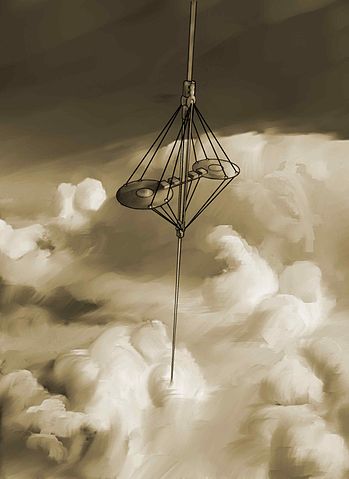 I'll spare you the gory details of elevator cable width, but if anyone really wants me to walk you through it and doesn't fancy reading eg. The physics of the space elevator to work it out themselves, do ask.

Not the answer you're looking for? Browse other questions tagged physics space space-elevators .

6
What forces should I consider for my hotel room on the Space Elevator?
4
From how much of a planet's surface will the Space Elevator be visible?
39
Do we actually have the technology for a permanent Moon outpost?
15
What color is a space elevator?
0
How high does a tower have to be, so that centrifugal force launches a payload into space?
14
How fast would a Martian space elevator travel?
4
What is the feasibility of a space port?
10
In extreme cases, can skyhooks or space elevators be used to funnel extreme planetary heating
4
Space elevator off Europa without running into a nearby moon?
1
Orbital tether snap like a rubber band?