What could possibly be the reason for a creature to have multiple sets of nostrils?

Now the question is why a creature have multiple sets of nostrils?

In arid or cold conditions animals opt to have larger noses instead, which is where the difficulty lies in this question.

That's an Indian bamboo flute, but the principle can be extended to a whole range of musical instruments which use resonance and flowing air.

Why go to all of the trouble of evolving a larynx or syrinx when you can have a much more simple system that works like a flute or a recorder or bagpipes?

Maybe the animal uses its tongue to selectively close the whistle-holes in its bill or snout, or maybe it has special muscular flaps like the nostrils of marine mammals. Whatever the specific mechanism, it can whistle melodiously through its many nostrils for the purposes of attracting mates, threatening rivals or whatever else takes its fancy, assuming it has one.

A creature that originally had spiracles, like an insect, will have had multiple air inlet/outlet openings. Spiracles, howevr, don't offer enough oxygen transfer area to support a body larger than a few tens of grams (see largest beetles and spiders).

So, in order to grow larger, the air passages that the spiracles connect to have evolved into lungs -- air-filled, highly convolute (for large area in a compact volume), sacs with muscular connection to expand and contract them -- but instead of just two lungs like most vertebrates, your former insectoids have one lung for each spiracle. Then, when they switch from exoskeleton to endoskeleton to allow them to get even bigger (than a rat, say), those spiracles become a row of nostrils, each with its own independent lung. They might or might not breathe in unison -- there are advantages either way -- and will most likely have some level of voluntary control.

Species of this line found in dry or cold climates may have extended nostrils, like tiny elephant trunks, to provide better moisture retention and heat exchange, and such extended nostrils (as with elephants) might become auxiliary manipulators. 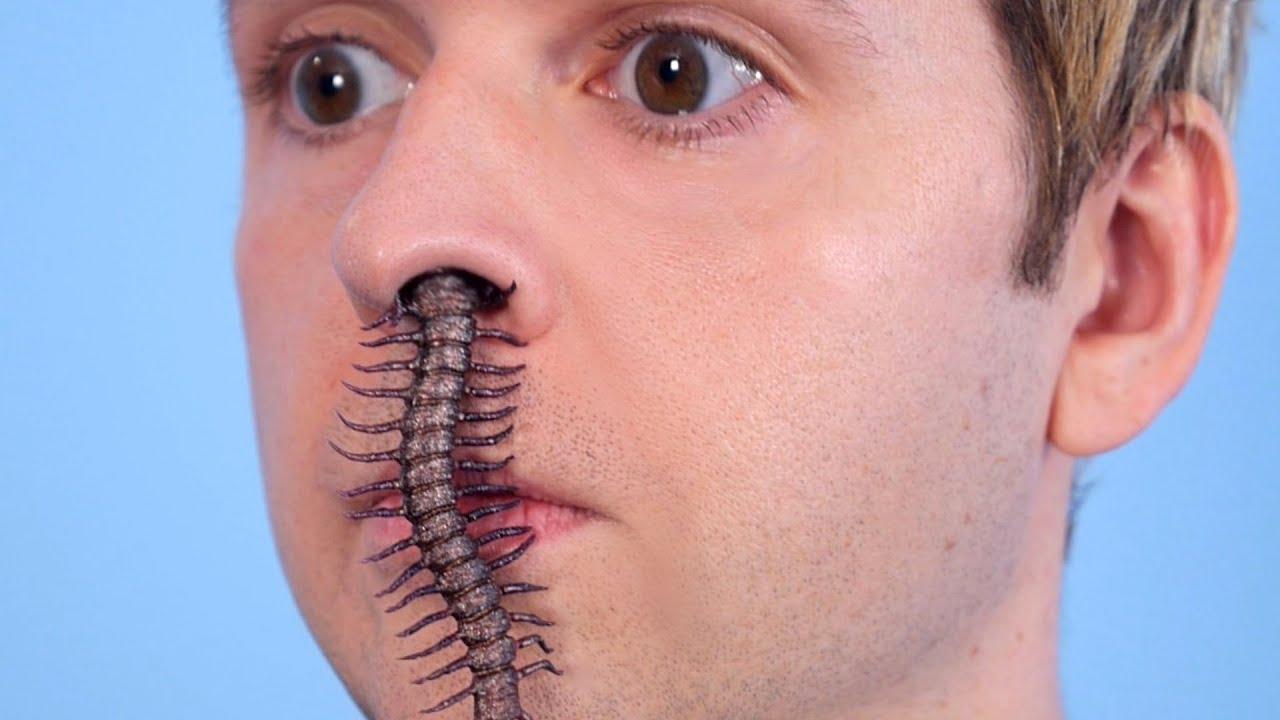 Large noses are better for smelling and breathing. Your species needs to smell and breath well.

Unfortunately a large nose is attractive to small burrowing insects. There is not a gadfly or centipede alive who does not relish the thought of flying or crawling into that schnoz and settling down for the winter.

The nose is a great place to live. It is warm and humid and there is a never ending source of food, provided you have the mouth parts to feed on blood. You are also near the brain, which is always good, in case you get bored.

Since there were too many bugs trying this, your species evolved to have many small nostrils rather than two big ones. This keeps the larger bugs out.

Suppose you'd have two noses, and a relatively large, broad head. Like our two eyes do, the noses could provide a 3-dimensional "stereo smell image", the brain then being able to sense the position of the origin of a scent.

Why would it exist ? This creature could be a blind predator, or a night predator. These animals will gain an evolutionary advantage to competitors, because they can locate their prey in the dark.

Each set of nostril is specialized for a different environment, in a way that makes the use of single set less efficient than the multi-nostrils approach.

They could have evolved different nostrils for different smells. So one set might be like ours now, and the other for something specific, such as pheromones.

They might also have different purposes altogether, such as one set for air with closeable flaps, and one set to act as gills, able to filter oxygen from liquid.

A Cetacean's nostril is on the top of its head to allow it to breathe while remaining mostly submerged. Alligators have upward-facing nostrils for a similar reason. For a being that routinely finds itself in different positions for long periods of time where much of the body is sunk into an area where oxygen is not readily available, it makes sense to have multiple sets of nostrils in different places so as to be able to continue to breathe in different orientations.

Most fishes, specifically all ray-finned fishes and most of the non-tetrapod lobe-finned fishes like coelocanths and lungfishes, have multiple sets of nostrils. 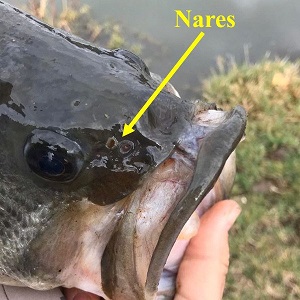 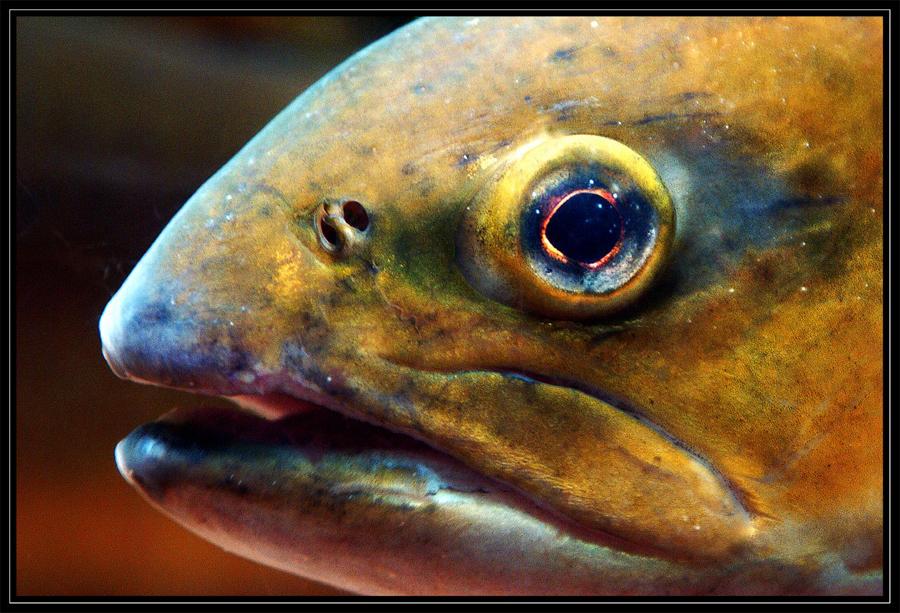 It's also thought that some of the extinct marine reptiles had multiple nostrils as well, though it's not entirely clear.

I'm not entirely sure why fishes have multiple sets of nostrils, but the explanation I usually hear is that it has something to do with how smell works in water. Namely that as the fish (or marine reptile) swims forward water is forced into the first pair of nostrils and then exists the nose via the second pair of nostrils. That way there is always water flowing over the sensory organs of the nose and the fish is constantly smelling its environment as it swims forward.

This works in fishes because unlike tetrapods, the nasal cavities of fishes generally do not link up with the digestive trace. In fact in tetrapods the rear set of nostrils ends up migrating into the mouth cavity over the course of evolution to eventually become the openings on top of our palate (choanae) that let us breathe through our nose.

Having multiple sets of nostrils lets you keep smelling even if one set gets clogged or inflammed.

In arid or cold conditions animals opt to have larger noses instead, which is where the difficulty lies in this question.

But "opt" isn't really the right word. It's simply that these animals' ancestors tended to have larger noses, which provided them with an advantage in their environment, so they became more likely to pass their genes along. It isn't inevitable that that would happen; it simply happens to be what did happen in this case.

In other words, it's entirely possible that creatures which happened to develop extra sets of nostrils did better in their environments, allowing them to pass along those extra-nostril genes, propagating the trait. This would have taken many thousands if not millions of years, but it's plausible.

A whale has only one blowhole, and doesn't even really breathe through it's mouth (apparently). The blowhole is located on top of its body because it usually swims with that part up. In contrast, your critter may have two or more swimming modes, e.g.: travel, predatory, hiding(?).

In any event, in each swimming mode it has a different part of its body nearest to the surface of the water, which can allow it to conveniently breathe even while mostly submerged in that mode. Perhaps

Your species has an incredibly sensitive sense of smell. One set of nostrils contains these scent receptors, tied very strongly to multiple parts of the brain. You can concentrate on a scent and experience the olfactory version of hyperfocus; your other sensory input fades into the background and the bulk of your brainpower is used for processing the scent.

The other set of nostrils has only the most basic scent receptors. This set is more like a horse's nose, designed to efficiently scoop in large amounts of air to fuel the body's aerobic processes while running or otherwise exerting yourself.

The body's default state is for the much smaller scent nostrils to be closed. You can consciously open them when you want to use them, but their intense sensory input can be overwhelming or distracting so they're "off" by default. You reflexively keep them closed when running, otherwise they'll be taking in so much air and generating so much sensory input that you can get disoriented.

Alternatively, your creature could be specialized for tracking, with two noses for differential scent analysis. It breathes in the scent of its prey with one nose, then closes that nose's nostrils to keep the scent in place. It can then track its prey using the other nose, with the brain cross-referencing against the reference sample for more accurate matching.

If the atmosphere has little oxygen (or, almost-equivalently, if the atmosphere is normal but the creature has exceptional oxygen needs due to muscular effort), extra nostrils could provide an adequate supply of air.

This question has the same answer as why most animals have two nostrils.

Having two nostrils allows for the smelling of left and right, for the same reason some reptiles have forked tongues. However, not all creatures exist in a 3 dimensional space, and of those that do, not all reside on a planar(or non-euclidean planar) surface. Some may need to be able to smell in more directions then just two, for the same reason that some sound systems have two speakers, left and right, while others have multiple, for surround sound(in this case, surround smell).
There may be a need for 4 nostrils, in order to smell up, down, left, and right.
A total of 6 is needed for all three dimensions.
But what if your species needs to smell forwards in time and backwards in time? Well that's eight nostrils at least...
Combined with the other answers to this question, with multiple sets for each direction(for redundancy), and any musical needs of the species, although those might be better done by internal pipes, see here, that's a whole lot of nostrils. Also many animals breathe through there skin, and all of those pores could be seen as nostrils.

4
Could a species have multiple skin colors/pigments?
4
Could a creature have multiple jaws?
1
Alternative origins for the lungs
13
What are the benefits and disadvantages if a creature has multiple tails, e.g., Kyuubi or Nekomata?
4
How could work a functional secondary respiration system ("Universal" respiration/lungs) at terrestrial and active creatures?
7
Creature which sets itself on fire and rebuilds its skin aftwards, would cancers on the skin be burned off too?
4
Via what mechanism could a humanoid entity regrow multiple sets of teeth throughout its life?
2
What is the strongest skin that a biomachine could possibly produce?