How reflective can a creature's body parts get?

I have a creature in mind that has almost no ability to turn its head left/right and has forward-facing eyes like primates and predators generally do. This would generally present a problem for a creature regarding anything sneaking up on it, but this animal species has developed a workaround and that is by having large ears that they can manipulate and has a reflective inner surface, allowing them to move the ears into their cone of vision and then angling them until they allow the creature to have an idea of what's going on behind them.

Problem is that I don't know how reflective such an organic structure will be able to realistically be with earth-like biology, whether the creature would be able to see things within the reflective inner surface of the ear with great detail like an actual mirror, or if it would only be able to make out that there is some sort of movement behind them but whatever that is they'll have to make the effort to use their legs to orient the whole body to be able to allow them to see what it was.

How reflective can a creature's body parts get?

I have no quantitative data, but one example from real life is the jewel scarab (in particular the Chrysina limbata from Costa Rica). They are not all shiny but some are highly reflective to the point where you can clearly see the photographers fingers:

Had the shell not been curved I'm sure you would be able to get a near perfect mirror image.

Some fish scales have evolved to be highly reflective as part of a defense mechanism, with clever crystalline structures optimised for reflecting light in ways that confound the vision of would-be predators.

From the linked article:

As part of their study, Jordan and colleagues advanced nature’s design a step further. They calculated a scale structure that would make fish almost entirely invisible – due to the 100% reflection of light from the surrounding ocean. 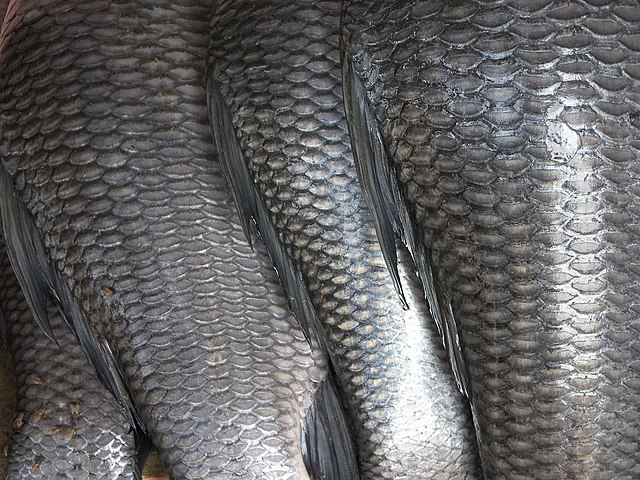 Many teleost fish are covered with highly reflective scales which function as small mirrors and give the appearance of silvered glass. Reflection through silvering is widespread or dominant in fish of the open sea, especially those that live in the top 100 metres. A transparency effect can be achieved by silvering to make an animal's body highly reflective. At medium depths at sea, light comes from above, so a mirror oriented vertically makes animals such as fish invisible from the side.

They haven't evolved to form a nice even image-preserving mirror-like finish over a large area because that isn't so useful for their intended purpose, but the basic design could be adapted and work just fine. Even without perfect image formation, movement behind the mirror-user would be obvious even if the details of the moving object were not clearly visible. This would be a good cue to turn around, or dodge, perhaps.

Fish scales can be lost and regrown, by way of a bonus, so your critters don't have to worry about losing their all-around vision in their old age, or as a result of damage to their ears.

Additionally, the flexible, moveable mirrors might also be useful as a way to dazzle and confuse predators and prey alike.

The tapetum lucidum (/təˈpiːtəm ˈluːsədəm/; from Latin tapetum lūcidum 'bright tapestry, coverlet'; pl. tapeta lucida) is a layer of tissue in the eye of many vertebrates. Laying immediately behind the retina, it is a retroreflector. It reflects visible light back through the retina, increasing the light available to the photoreceptors (although slightly blurring the image). The tapetum lucidum contributes to the superior night vision of some animals. Many of these animals are nocturnal, especially carnivores, while others are deep sea animals.

In the cat, the tapetum lucidum increases the sensitivity of vision by 44%, allowing the cat to see light that is imperceptible to human eyes.

Which I interpret as it reflects back 44% of the light reaching it.

5
How would a Dumbo-like creature filter noise?
6
What is the botanic equivalent to ears?
5
Creating a scientifically semi-valid super-soldier, part 7: Hearing
2
Segmented Endoskeleton
7
Alien Mammal-Like Ears
2
Can Owl Ears Instead of Echolocation Guarantee Life in Cave Colonies?
9
How could crystal lifeforms move and work?
0
Humanoid hummingbird
4
Are retractable ears plausible?
2
My creature mixes lye and sal ammoniac to cool its blood. How cold can its blood get before it stops working as blood?