Is a universal land and launch spacecraft theoretically possible?

Nearly every science fiction story features a craft which lands on a planet, allows egress to the surface, and then leaves the planet. Logistics is almost never a part of the story. In considering following this popular path in my story, I wanted to first know if such a craft could be possible without breaking physics.

Letâ€™s grant that fuel has been handled somehow. The fictional world has a supply chain of some sort for that. But the fuel itself real; it is not magical, and not beyond current technological abilities. Whatever the fuel is, it is also suitably abundant for this purpose. I personally consider a portable controlled fusion propulsion system outside technological limits for this question, as anything resembling a sustained controlled reaction requires prohibitive support systems for a mobile platform. Concerning antimatter drives, I consider this study as canon within my world. Such systems are generally unsuitable for use in an atmosphere.

For examples, consider the Jupiter of Lost in Space, or the Star Trek shuttlecraft, the UD-4 Utility Dropship (Cheyenne) of Aliens, or anything at all in the Star Wars franchise or Battlestar Gallactica franchise.

I will limit the design capabilities to our own solar system (since nearly all science fiction craft land on earth-like planets anyway, radical exoplanets donâ€™t need to be considered). That means the craftâ€™s land and launch capabilities need to accommodate any planetary mass in the Sol star system which has a solid surface and useable gravity. I want to know if it is within theoretical technological possibility to engineer a single craft, of any crew-able size, which can both land and launch from every accessible planetary mass, having only fuel, rations, and periodic maintenance as limiting factors.

I can grant exception to the most extreme surfaces, provided a large majority of surfaces in Sol can be accessed. Numerically, it is preferred that fewer than 10% of our systemâ€™s surfaces would require specially engineered vehicles.

It is, but obviously a "one size fits all" vehicle will inevitably excel at no particular task.

The two most problematic bodies in the solar system are probably Earth , Venus and Mercury. I think that with Venus' unreasonably thick atmosphere and exceedingly hostile surface it probably deserved its own special spacecraft so I'll ignore it.

Earth also has a pretty thick atmosphere compared to all other bodies in the solar system with a plausible surface to land on, and higher surface gravity to boot. Happily there's some existing research on operating spacecraft there, which means that anything capable of landing on and launching from Earth is probably going to be fine everywhere else.

Mercury has both high surface gravity and no atmosphere, making it the most challenging plausible planet to operate on. You can't aerobrake onto it, so you need rockets for both landing and ascent. However, the total amount of delta-V to get from orbital speed to stopped on the surface and back (<8.5km/s) is pretty close to the amount of oomph you need to get into orbit from Earth's surface, so any rocket that can do that can potentially land and return from Mercury without needing a refuel.

Surface-to-orbit on Earth, in a single stage, is pretty much what you're asking for. It is a tough proposition, but not an insurmountable one. I've come across this nice chart (which was unsourced, irritatingly, but I'll see if I can track down its origin) which shows the required propellant-mass-fraction of a single-stage-to-orbit rocket-propelled vehicle, given the specific impulse of its fuel: 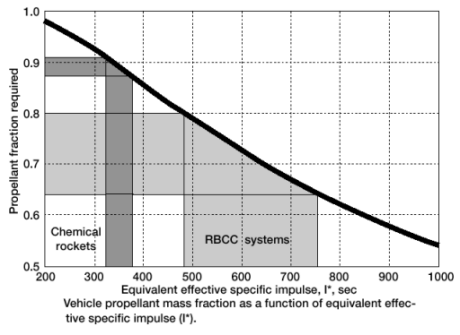 For reference, a modern airliner has a maximum takeoff weight of perhaps twice its empty weight, which means a similarly engineered vehicle could have a propellant fraction of no more than 0.5, which would leave no capacity for crew or cargo. Something like a Saturn V managed a propellant fraction of 0.95, but only by using staging. Modern spacecraft like the SpaceX Starship might just be able to squeeze into orbit with chemical engines but with no useful payload mass.

RBCC means Rocket Based Combined Cycle, such as the SABRE engine design for the Skylon SSTO. Unfortunately, to attain the high-Isp you need an atmosphere, and preferably one with an oxidiser in it. That basically rules out every other body in the solar system, and much of the rest of space, too.

That leaves nukes: nuclear thermal or nuclear pulse. There's no other way to get a high enough specific impulse in order to get your propellant fraction low enough to have a vehicle with a useful payload.

Nuclear pulse, in the form of good old Project Orion will certainly serve you for takeoff, but using nukes to brake in an atmosphere is basically suicide and the final touchdown burn on an airless world will be similarly bad. This means you need some other powerful rocket for landing on a big airless world like Mars or Mercury with a fairly deep gravity well.

Solid-core nuclear thermal rockets might work... the real world designs for DUMBO or Timberwind were substantially more powerful than the more well known NERVA and have a high enough Isp (~800-1000 seconds) and high enough thrust to give you a single-stage-to-orbit on Earth. There's some issue with radioactive fallout in the exhaust plume, but you haven't stated that's unacceptable so I guess the acceptability of those designs is up to you.

If you wanted to land a full payload onto Earth, you might need to refill your propellant tanks before you could take off again, but nuclear thermal rockets have quite a wide range of acceptable reaction masses. Hydrogen is best to maximise that specific impulse, and Earth is covered in water and you're carrying a nuclear power source so processing it in-situ should be fine. You'll need access to a nuclear fuel reprocessing facility after a few flights as your reactor core (fuel rods or fuel pellets, depending) starts filling up with nuclear poisons and needs to be replaced.

The useful payload fraction is likely to be low... you'll need to carry noticeably more reaction mass than guns or people or whatever.

A slightly more crazy idea might be a Closed-Cycle Gas-Core Nuclear Thermal Rocket, aka. the Nuclear Lightbulb. These systems have a formidable specific impulse of around 2000 seconds... that exceeds the projected efficiency of the antimatter rocket design you linked in the original question. The useful payload fraction is going to be substantially higher than plain old solid-core rockets, to the point where your shuttlecraft could start carrying cargo like modern-day heavy-lift aircraft do, like multiple armored vehicles or large numbers of people or entire scientific bases.

Building such a thing seems pretty implausible, given that you need to confine fissioning uranium plasma. It is not necessarily impossible, however. The crazy nuclear engineers of the cold war deemed such a thing a potential future possibility, and there's a more obvious technology path from where we are now to a nuclear lightbulb than to a high-thrust fusion rocket, that's for sure.

Not only does the CCGC rocket have a much higher efficiency than the solid-core rockets, it also doesn't spew radioactive fallout all over the place when operating. On the flip-side, it is one of the small number of unreasonably powerful rocket designs which would, in fact, explode violently in the event of the right kind of damage. Too few realistic scifi engines have this feature, and being able to go foom in a brilliant cloud of fission plasma is clearly valuable from a plot point of view.

It may also be possible to build a nuclear-powered rocket with an electric plasma thruster that's powerful enough to do what you need. The SERPENT design might just fit this requirement. The Scorpion spacecraft proposal doesn't quite meet your specific needs (it isn't designed to operate in an atmosphere) but shows that it might just be possible to make a scifi-style orbit-to-surface-and-back for most bodies in the Solar System: 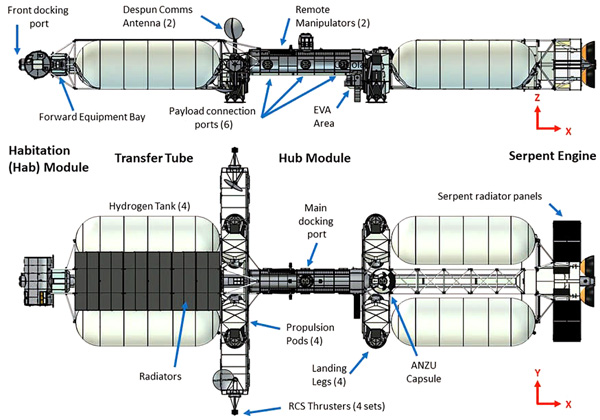 With specific impulses of more like 1200-1600 seconds, your cargo fraction is going to be somewhat less than nuclear lightbulb vehicles, but you might not need to be mostly-fuel-tank like a solid-core rocket would need to be.

I'll spare you any further walls-o-text for fusion or antimatter rockets, but I do note that the use of a solid-core antimatter rocket would need only very small amounts of antimatter (submilligram) for an Earthlike gravity well, and a fairly modest amount of radiation shielding. The specific impulse is relatively low (equivalent to nuclear thermal solid core) but if you can collect reaction mass locally (eg. splitting water or ice into hydrogen) then you can carry enough antimatter for many, many flights without needing a ridiculous antimatter storage or manufacturing system.

There are several options that meet the requirements:

(Except mercury and venus, not because it doesn't work there, but mercury is essentially infiero and venus looks like a demon world out of warhammer 40k and no one with common sense would try to set foot on the surface of those planets)

1 fission rockets. Since a long time ago, the initial idea is simple just a weapon grade plutonium core and control rods just pass liquid nitrogen or other inert gas in liquid state, the heat from the plutonium core heats the gas in the same way chemical reactions do in a normal rocket but with the advantage that you don't have to carry oxidizer and you have much more energy possible and ready, it is possible to adapt this to ships with aerodynamic shape in atmosphere and to travel through space. This will work on any planet in the solar system.

2 plasma engine. The idea is simple: take gas such as nitrogen or directly air if the planet has an atmosphere, convert it into plasma by microwaves and accelerate it electromagnetically. This works either with a turbine taking air from the atmosphere or with nitrogen from a liquid nitrogen tank, the energy can easily be generated with a compact nuclear reactor (nuclear powered aircraft have been around since the cold war era).

2
Evolution of spacecraft with advent of cheap and effective payload launch
50
How long could the sun be turned off without overly damaging planet Earth + humanity?
8
How would an interstellar civilization construct a planetary shuttlecraft?
11
Feasibility of coilgun system for sub-luminar interplanetary transport
14
Are trojan planets possible? Are habitable trojan planets possible?
11
What is the maximum orbital time for my moon around my planet?
4
Dyson Sphere only ever possible theoretically
3
How could we (modern humans) get established on a hot planet?
6
Is my fusion thermal drive theoretically possible?
14
How discreetly can a small spacecraft crash land?