I have a fiction piece I am working on, which contains a Empire whose people are anologues of Russians. They're paranoid, defensive, and prefer to build walls and castles wherever they go for safety. The land in which they live is a series of mountain and river valleys which abut a circumpolar glacier. The lowest latitude of their empire reaches roughly to the 57th degree N. Most of the Land is Taiga, boreal forest, and tundra.

This is the product of two and a half years of meticulous design, redesign, and playtesting with fellow writers in my area. Given all the Factors below, and the people described, is this federal-feudal system a stable enough government to protect the common man and woman of the Enarya from threats both foreign and domestic?

TL;DR at the bottom if you don't want a history lesson.

In this land, the people holed themselves in high mountain passes behind labyrinthian systems of fortifications and holdfasts, eternally warring as they sought new high grounds to acquire for their own defenses. The rulers of the mountain fiefs were the Vojvodi, and the lowland river-dwelling rulers styled themselves as Boyarin. They Traded food from the (relatively) prosperous rivers in exchange for metal and stonework found mostly in the mountains.

The Boyars, through mostly peaceful means, united the lowland towns and cities under their banners, and left the Vojvodi to themselves. They facilitated trade between the vojvodi, and their fellow boyars. After several centuries had passed, the Wars of the Vojvodi came to a standstill, as every conceivable fortifiable strategic point had been walled-off and defended many times over. Meanwhile, the Boyarin and lowland Enarya peoples had grown wealthier and more prosperous.

The Vojvodi, however, had grown gradually weaker and more desperate as their wars soured, and were faced with the possibility of their state being taken advantage of by the lowland boyars who resented the steep tariffs imposed upon their goods. As a compromise, the Vojvodi negotiated to join the Boyars, though with much greater autonomy than the mayors of their other constituencies.

After five centuries of consolidation and peaceful expansion, the greater area of Enarcha contained 6-8 Boyarin, and within each a massive quantity of vojvodi, provostyi (mayors), and the individual hetmans of the smaller villages. 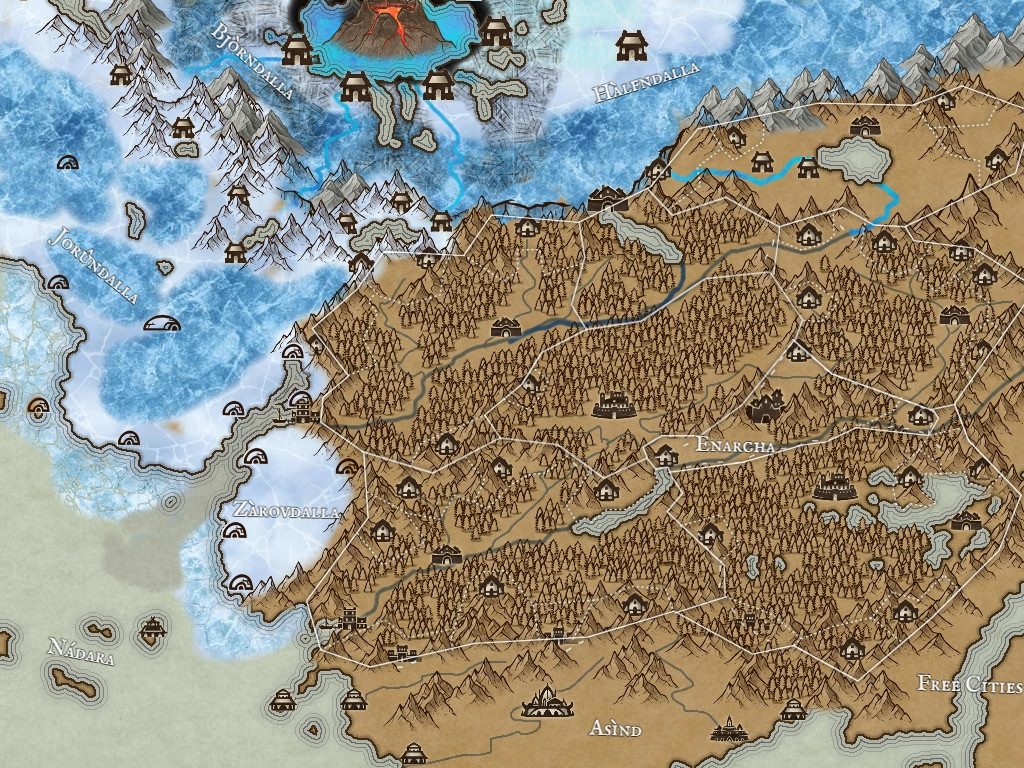 This system was mostly peaceable and stable save for occasional skirmishes and minor disputes. It wasn't for another century thereafter when a foreign invasion took the southern coasts, displacing the Enarya en masse and nearly entering the valley itself. The Southern Boyarin formed hasty alliances and together fought the invaders to a standstill in the foothills of the vital passes. Being Enaryat, the alliance collectively contracted their vojvodi to create massive walls to span the length of the valleys, all while under constant pressure by increasingly desperate invaders.

The Bloody war was eventually ended when the Boyars finished their walls and manned the fortresses embedded along it. A final all-out assault by the invading force crumbled, resulting in a humiliating and decisive end to the incursion. Peace was signed, and the Boyarin reluctantly granted the Southern coast to the invaders, realizing that the land was simply indefensible past the mountains. Fearing future attacks by similar foes, the Western Coastal region was abandoned as well, its people quickly fleeing for the safety of the high walls of the mountains.

Sensing future conflict was inevitable, they reached out to the other Boyarin and gradually roped them into the alliance. The Northern Boyars acquiesced, with watchful eyes turned to the glacial tribes which had been encroaching steadily toward their borders. After much deliberation, the Boyars elected one of their own, Ivan Zakuviy, as the Tsar of Enarya, though they limited his authority with a strictly enforced constitutional system.

I have min-maxed as best I can for at least internal stability.

The Hetmans are pressured to help their neighbors and their families, and are indispensable to the Provostyi whom they serve. They are local tax collectors, fully knowledgeable about how much any given person can comfortably pay, and more than willing to accept goods instead of coin. They are not obligated to provide a coin amount for tax to the provost, but rather a fixed percentage. Thus, no greedy big-city taxmen causing poverty and famine in the villages. If any one Hetman steps out of line, there are several more nearby to condemn and divest him of his power by popular vote.

The Provost are accountable to their Hetmans, who, if they sense corruption or something amiss, will boycott elections and prevent the Provost's re-election to the post. The Provost does not collect his own town's coin for his living, but rather lives in housing provided by the Boyar he serves at no charge, and is paid a wage set by his Hetmans. He may only propose municipal laws, which must be confirmed or denied by popular vote with sufficiently high turnout.

The Vojvodi are paranoid and unwilling to leave their mountains for war, and defend their territory with single-minded determination. They have no interest in conquering the lowlands, nor the flat, windswept tundra beyond the borders. They are more than happy to be granted the borderlands, and guard them against foreign attack in exchange for exemption of their villages from taxation.

The Boyars are too busy dealing with the hordes of temperamental Provostyi to have designs on their neighbors, and leave the management of the peasantry to the Provostyi as long as the taxes keep rolling in. They maintain a retinue large enough to fend off a surprise attack, but usually are more than happy to let the Vojvodi spend outrageous sums of money and manpower on the defense of the greater realm.

Lastly, the Tsar has restricted authority, only able to settle negotiations between other Boyars. His authority is enforced by the non-contested boyars, and a large imperial retinue kept in the capital, which is paid for by the taxes of the Grand Provostyi (Mayors of the Great Cities who answer directly to the Tsar), as well as import duties and tribute from local protectorates. During times of war, he takes control of the Vojvodi, and organizes military responses to foreign aggression.

"Is this federal-feudal system a stable enough government?"

Congratulations! You have reinvented the Holy Roman Empire. In real history, this one-of-a-kind political structure endured for either eight or ten centuries, depending on whether you count Otto I (correctly) or Charlemagne (incorrectly) as the first emperor. That is a very long lifespan for a political structure.

There is no relationship between the Holy Roman Empire and the real Roman Empire. They simply reused the name of a famous, poweful and well-remembered empire. For about 400 (or 600) years, the HRE in Central Europe and the real Roman Empire in South-Eastern Europe coexisted. They never fought directly, and in general they usually ignored each other's existence; except that in 1204 the Fourth Crusade, which included a large number of noblemen and troops from the HRE, took and sacked Constantinople, founding a short-lived Latin Empire.

How did the Holy Roman Empire work?

And this enormously complicated structure endured for many centuries, from the early Middle Ages well into the Modern age. (It was formally dissolved in 1806, during the Napoleonic wars, when the last Holy Roman Emperor, Francis II, chose to take the title of Emperor of Austria and "released all imperial states and officials from their oaths and obligations to the empire", as Wikipedia says, artfully working around actually saying what those oaths and obligations entailed in practice by that time. (Which is, nothing much.)

Lessons to be learned from this historical example:

I'll take the pessimistic position and say no, unless a string of Tsars are exceptionally talented or that whole giant expanse is quite culturally homogeneous.

Generally, huge empires with lots of very inhomogeneous subjugated foreign peoples tend towards strong centralised government and tyranny (and a powerful state church). Russia, Imperial Rome, the Byzantines and the Ottomans all come to mind. The Roman Republic's transformation into the Empire was largely driven by the incompatibility of the Republic and their foreign entanglements. (The USA's long-held isolationism was a deliberate attempt to avoid being Rome 2.0...)

The Holy Roman Empire, which your empire resembles in terms of constitutional structure, was at least Catholic and German speaking* *(OK, and some very Catholic Italians).

At some point, a constitutional emperor is going to face a rebellion or foreign war or push for independence in a remote province, and the local state will do nothing or even be on the wrong side of it. If that coincides with a Tsar who isn't on good terms with the neighbouring boyars that he needs to pacify the area...trouble.

The more culturally alike the various Boyarim are (and the more different to their non-imperial neighbours), the better the chance for this empire. If the whole empire has a religion that its neighbours do not, and a capable and loyal church, the odds get much better.

Not the answer you're looking for? Browse other questions tagged society government .

9
Why would common city people want to protect a forest
9
How to make different social classes look quite different?
6
If all taxes were replaced with a Land Tax, would this deliver a fairer society and improve the economy?
12
Could large but sparsely populated country control its borders?
20
How to seize control of a region?
17
How can a extremist group gain total political control of a medieval society?
10
Art and Fashion for Nocturnal/Underground Species
9
Mercenary Nobles