Getting around in Hell when you can't fly?

As a follow-on to my physical Hell planet I am having a great deal of trouble deciding which sort of locomotion people would use when they are not in airships or on the train. People need to get around, at least from the train stations to mining sites or energy farms. By getting around, I mean for routine travel. They have slow moving tractors for plowing and construction, but to just travel between small towns or between towns and work sites, they need something equivalent to a carriage or a car, with luggage space and good speeds over land. Tractors are slow, airships too cumbersome, and trains only go where the tracks are, and on their own schedule. Another mode of locomotion needs to serve individual needs.

Well, it's 420°C outside. That pretty much sums up all the challenges.

The society has developed very good insulation materials and has efficient chillers to move heat out of cab spaces. All that is needed is the best traction method to carry the passengers, luggage, and fuel on personal trips or small loads.

How can people get around Hell when they're stuck on the ground?

(info provided here all originates from NASA.. Your planet has a Venusian temperature, which poses a technological challenge for a lander, NASA covered several aspects !)

If you need to use lubricant in bearings, did you consider lead oxide?

A dry lubricant coating in ceramic form consisting of 95 percent lead monoxide and 5 percent silicon dioxide withstood a temperature of 1200 deg F, with a bearing operating at various atmospheric pressures. From this testing, there was no galling or metal transfer of the bearing.

It seems to me an electric motor could be appropriate, because you can make an electric motor out of metals that won't melt at 420 degrees celcius and it won't need much lubricant in its bearings. See above. When polished, there won't be need for that at all.

Venus is an extreme world. With a surface temperature in excess of 840 degrees Fahrenheit and a surface pressure 90 times that of Earth, Venus can turn lead into a puddle and crush a nuclear-powered submarine with ease. While many missions have visited our sister planet, only about a dozen have made contact with the surface of Venus before quickly succumbing to the oppressive heat and pressure.

..maybe the pressure and winds are not the same (?), so you can't use wind for energy harvesting, but your question did remind me of a challenge NASA put for a vehicle for that planet in 2020, the winners are here: NASA's Venus Rover Challenge 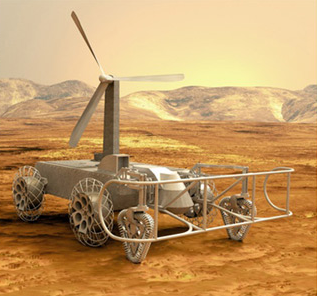 If there are people living in hell permanently, as humans and other living things on earth, then they have adapted to the environmental conditions of hell otherwise they cannot survive.

Strain 121 (Geogemma barossii) is a single-celled microbe of the domain Archaea. First discovered 320 km (200 mi) off Puget Sound near a hydrothermal vent, it is a hyperthermophile, able to reproduce at 121 °C. (see here)

All materials are in states as dictated by the hell's environment. At 420 °C,

Steam engines work under the three laws of thermodynamics. You need steam at even higher temperature to produce pressure. Quadrupeds may work but hexapods can carry loads better. For more explanation, See here. 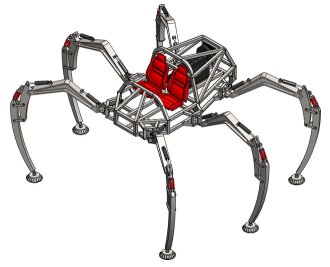 It seems you have already figured out how hell-tractors work. You don't say how these hell-tractors overcome the list of challenges but I presume you have something in mind.

For short range personal transport you can just use something analogous to a tractor, with the same technology, only a bit smaller and less tractor-y. Make the wheels thinner and less bumpy to go faster.

That is assuming you have roads. I'm sure it's hard to build roads at 430 C. If you don't have roads then the normal tractor might be your best bet. The wide bumpy wheels are good for off-road you see.

We have trains between established areas and mining equipment to establish train lines.

We have airships that can move via Air.

We don't have ground travel that isn't on a track yet, which tells me this is likely to be rough terrain.

Animals get around rough terrain using legs, which is largely the best solution I have for a hellscape, depending on how much of the floor is lava.

To keep the cabin, joints, and cargo within livable ranges, we're looking at an exoskeleton (think the body of an insect) to keep the outside out and the inside in. A liquid coolant or vacuum layer may or may not be used to further insulate (which will require loading/exiting design considerations) which will hopefully solve the bearing lubrication issue, unless the drivers rely entirely on a suit to stay alive.

If being pulled by mechanical horses? The mechanics of the legs can simply by powered by the pull from the front, similar to how Theo Jansen's wind powered walkers work. Just push it in the right direction and the legs will provide everything else to smooth the motion above the surface.

This walker would likely have 8 legs, allowing the ability to walk and climb over the environment and test footing while keeping a stable base on known solid ground, but I'm not sure how far ahead or apart the chariot is from it's horses.

EDIT: You could have teams of these walkers work in tandem with air suppliers to build up new encampments. The vehicles would be able to set up in a location, lock together (flat beds on their backs) and create a level landing platform for Airships to drop supplies down for research, mining, etc.

You have individual track-riding cars. These take the tracks most of the way and then go off road whatever distance is left to the destination.

Almost all destinations are along the tracks. If there is a new destination that will be visited with any frequency, tracks are built out to it. As regards destinations remote from the tracks, they are unvisited except on special occasions and then probably by airship.

Not the answer you're looking for? Browse other questions tagged science-based chemistry engineering .

8
Illegal Steampunk horse racing after the apocalypse: What format is most profitable?
5
What can run the condensers on this Hell Train?

12
Could you fly airplanes on Jupiter?
6
Using electromagnets in tracked vehicles
17
Quantum Based AI getting around Isaac Asimov's "Three Laws of Robotics"
2
Would sparks fly when a spaceship is attacked?
4
Victorian long-distance express transport?
17
Could you fly a Boeing 747 on Venus?
4
How could wyverns fight effectively if they can't carry stuff around?
6
What are you actually moving when telekinetically moving/shaping fire?
5
What can run the condensers on this Hell Train?