How big does a world have to be to not have a sunset?

Normally we watch the sun descend, it's dimmed a bit by the atmosphere before dropping below the horizon.

What I'm interested in is how big it would have to be so the atmospheric dimming is sufficient that the point it dips below the horizon is unnoticeable.

External Edit: This is how I understand the question: On Earth the sunset has two phases. In the first phase the sun moves towards the horizon, and its light is dimmed by the shallower angle it makes with the planet and the longer journey through the horizon. The light continues dimming as the angle becomes shallower. The second phase begins when the sun touches the horizon. Usually the atmospheric dimming is mild enough that the outline of the sun can be seen touching the horizon. In phase 2 the sun moves under the horizon the dimming is more pronounced than phase 1 and continues until the sun is no longer visible.

The Asker wants a world where the dimming in phase 1 is so extreme that by the beginning of phase 2, the outline of the sun can no longer be made out in the sky. Maybe it is visible as an indistinct glow or maybe there is no light getting through the atmosphere at all!

(Assume an unaided human observer in an atmosphere suitable for a terrestrial ecosystem, it need not be exactly Earth's atmosphere. When the star is overhead something like 1000W/m^2 like we get on Earth.)

I have no doubt this has to be far bigger than any rocky planet and thus must be some sort of megastructure. (Say, a Dyson Sphere with stars orbiting it.)

We want a sufficiently long light path through the air when looking horizontally that atmospheric extinction will increase (recall that larger magnitudes are dimmer, smaller magnitudes are brighter) the magnitude of the sun to the point that it is not discernible to the human eye by the time it reaches the horizon.

Minimum attenuation in Earth's atmosphere is about 0.16 magnitudes per airmass, where 1 airmass is the path from the surface straight up towards the zenith. It would be nice if we could just use some trigonometry to figure out how much longer that path is along the horizontal... but that doesn't actually work, because air density remains high for longer the lower your elevation angle.

Empirically, however, looking towards the horizon gives you about 40 airmasses on Earth, which would give you an extinction factor of about 6.4 magnitudes. In practice, Earth's air is never that clear for that long, so empirical extinction for our sun is considerably higher-about 11 magnitudes for 40 airmasses.

The sun's zenith magnitude is -26.7, and the limit of human perception is 6.5. So, we need a total extinction factor of 33.2--or just a little over 3 times what we have on Earth. Since a path near the horizon spends the vast majority of its time in the thick, lower atmosphere, I think we can reasonably discount the drop in air density with altitude and treat it as uniform when figuring out how much to extend the path--which means simply tripling the path length (plus a bit) should be a reasonable approximation.

where $d$ is the effective atmospheric depth and $r$ is the planet's radius, I get 57371 km as the radius beyond which atmospheric attenuation would make the sun invisible just before it hits the horizon. Or, just under 9 times the radius of Earth, assuming all else (gravity, surface pressure, and atmospheric composition) is held equal.

Normally we watch the sun descend, it's dimmed a bit by the atmosphere before dropping below the horizon.

On earth, we watch this

The bright to dark duration is small and transition seems rather abrupt.

Then you write the second scenario as:

its dip below the horizon is unnoticeable.

On earth we watch this

You can choose any of above situations.

After the External edit, the new answer is as follows

Atmospheric extinction is the dimming of starlight by the terrestrial atmosphere. The path length through the atmosphere is known as the air mass. Air mass increases with zenith angle as shown in the figure below (taken from here). 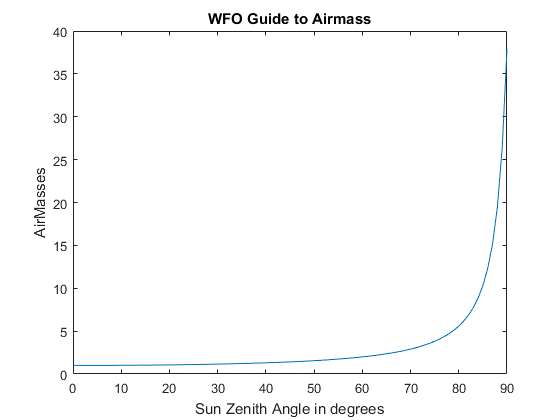 There are three main sources of the extinction in the atmosphere.

The atmospheric extinction will increase if

With sufficiently large coefficient of extinction, as the sun goes down, air mass will increase (see figure) and sun will gradually become invisible.

What I'm interested in is how big it would have to be so the atmospheric dimming is sufficient that the point it dips below the horizon is unnoticeable.

I'm afraid that size does not even enter the picture, and would not work anyway.

What you want is a dimming difference between two angles the Sun makes with the horizon. When the apparent height of the sun varies little, we are also in a zone where the light path through the atmosphere varies almost linearly with the angle. So, you can't have an abrupt dimming.

Also, anything below the critical angle would be extinguished by atmospheric extinction, and so would appear... like a horizon. What you'd accomplish would be something similar to raising the horizon.

On the other hand, a large megastructure might have several artificial Suns orbiting, or suspended, at a fixed height, and more directional to boot. That would get you closer to your goal, and also, the possibility of having several Suns going around the structure would compensate the "4h day and 20h night" effect. Slow down the Sun by a factor of 3, and get 12h day and 60h night. Add two more Suns equally spaced, and you get 12h day and 12h night.

8
What would the horizon look like when standing on a very large planet?

31
Does living without access to sunlight for extended periods have known physical or psychological effects on humans?
5
How long does a component of a Dyson swarm spend in shadow?
12
How much mass does a human need to live a satisfying life?
20
How to not get blinded by an attack at dawn
11
How close to the Sun would you have to be to hear it?
3
Can a Sunset Be Black (Infrared)?
7
How big could a water planet be and not have an ice core?
5
How large would this Laboratory ship have to be?
6
How does ocean productivity vary with depth?