How can a hypostatic union be the preferred fusion between gods and mortals?

The Great Wheel is a planar cosmology which defines how the planes, worlds, and realms of the multiverse are connected to one another. Throughout this multiverse, there are various gods that exist which have their own cult of worshippers and regularly interfere with humanity. Powerful barriers separate the higher realms from the mortal world, preventing these gods from controlling world events. This forces gods to enter a realm through more creative methods if it seeks to influence humanity and the flow of history. Daeva is an umbrella term used to represent a collection of divine entities that have since entered the mortal realm and have become human. There are three specific ways in which a deity can accomplish this:

The three forms of Daeva basically come down to a god in the body of a human, an entity resulting from the blending of a god and a human, and an entity that is both god and human. Nevertheless, they are all hybrid forms of the same two creatures, with the divinity becoming one with the mortal. The third type is hardest to justify, as it is modeled off the story of Jesus. In a world where multiple gods exist and are running around as human mortals, this method becomes redundant, requiring much more time and effort. It's also the hardest to explain, as its basically a mismatch of the other two with little in the way of separating it that makes it unique.

What would make the hypostatic union a more preferable method for a deity to enter the mortal realm as opposed to the others?

Let's compare-and-contrast the three modes by which a god may inhabit the mortal realm:

There's at least one more criterion that I'd think is relevant, but which you don't comment on: how does a god extricate themselves from one of these unions?

This could be a really important consideration. If one of these options effectively traps the god inside the body until the proper exit conditions are satisfied, and another option does not trap the god, that will matter. Imagine that apotheosis is such a deep intertwining that the god can't leave the body until the body dies and is destroyed according to some ritual. If that were the case, a god might find themselves trapped in a mortal body that's not in a good position to pursue the god's goals, and then stay trapped in the corpse for an arbitrarily long period of time until future cultists can find the body and perform the ritual. That could take a god out of the game for centuries. (But might make for a really neat story arc.) IIRC, the movie Dogma does something like this.

On that topic, I think this makes the most sense: 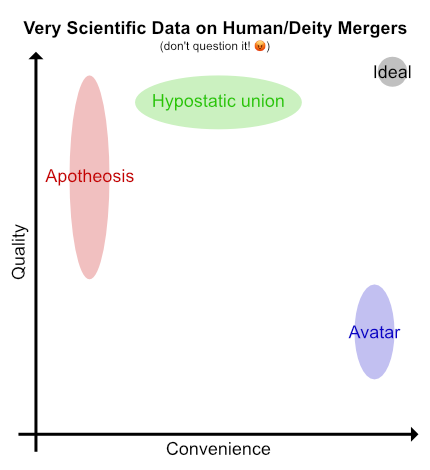 The Hypostatic Union is the closest to the Condition Humaine a deity can get.

It is difficult to grasp human nature and its petty ways. Suffering through 'conception' (immaculate though it might be), gestation, and birth, will allow the deity to come closest to experiencing life as a human being — temporary and temporal, vulnerable, emotional, mortal, lethal.

Why would a deity want this in the first place? It is certainly not for all deities, but some

Hypostatic Union Strikes The Best Balance Between Mortality and Divinity

If I am understanding this correctly, an Avatar is having the god take a blank vessel and fill it with their power. In this situation, they are essentially purely a god but disguising themselves in a human meat puppet.

Even if this is easy to create, I feel like this would be rather uncomfortable for a god. Though the body might be set to all their specifications, it is not truly their body, but rather a skin suit that must be far more limiting than their true godly form (whatever that might look like).

You have to remember that humans and mortals are effectively ants compared to a god. This is more than simply a size difference, they are two vastly different creatures with vastly different brains. Imagine a person shoving a human brain inside of an insect's body. Even if they managed to get control over themselves, the sensation would be rather unpleasant. In the same way, a god suddenly jamming their consciousness into a fully formed human body is incredibly uncomfortable.

They are hit with a flood of emotions they would otherwise never be able to feel, including unpleasant ones such as pain or fear. Even sensations as simple as breathing would be utterly foreign to them and downright horrifying. All the vastly unpleasant aspects of the human body come rushing at the god at the same time, making them feel weak and powerless, much what would happen if a human suddenly woke up one day as an insignificant ant, seeing the entire world towering over them.

Apotheosis, on the other hand, is taking a fully developed human and shoving a godly consciousness and power into them. Even if the union is "perfect", the simple fact that a person's whole consciousness is being overwritten is horrifying to consider.

Some gods might object to apotheosis from an ethical standpoint, seeing it as taking over their follower's free will. A good god might find such a practice immoral, even if it is the follower's choice to undergo this transformation.

The biggest problem is that the follower is still in there somewhere. Unlike the Avatar, you can't even really pick and choose the exact characteristics that you want, the best you can do is find someone that is as close to you as physically and mentally possible.

What if even the follower you like the most, the one who seems perfect, has traits you do not like? One flaw that you cannot get over? Blending together your consciousnesses means that flaw is now your flaw as well, thus making you imperfect in that regard.

Asking a god to share headspace with a mortal is a lot like asking a person to share a brain with a rat. Even if the union works out nicely, these are two fundamentally different beings getting squished into one.

Hypostatic Union is the best of both worlds. It's not a meat suit like an Avatar, a puppet that you have to pilot around. The body that you've made is ultimately your body. I suppose the downside is that you cannot control what you look like unless there is a method of controlling it, but simply having a body that you can say is purely your own would be nice. It eliminates the problem of discomfort that I was talking about earlier. If you get an entire childhood to get used to the new body, you'll probably be so used to it that you'll forget ever wanting another.

That's another advantage. You get to have an actual childhood. If you make a fully-grown Avatar, you're skipping many stages of human development and going straight into adulthood, unless the form itself is starting as a child and can grow up. Even if there are no mental effects to skipping those stages, it gives the god more chance to feel like they are actually a human, making the experience more authentic.

You get to have parents, a family, and perhaps a job or a spouse. You get to experience all the pleasures of a mortal life from scratch. Where's the fun in that?

Avatars are best if you simply need a way to communicate with humans for a bit. For example, short-term interactions such as giving your followers a message. You're not there to be a human, you're there to be a god in a mortal shell.

Apotheosis is for when a follower has done a particularly good job. It is the ultimate reward for their loyalty. Results vary with the person.

The hypostatic union is for gods that don't just want to pretend they are human but ones that want to BE human.

Dimension X is a place where only gods are allowed, but Apotheosis recipients can't visit because it still considers them human.

Dimension Y is a place where only humans can go (for example, some sort of afterlife) Avatars cannot visit because they are not human.

Gods who went through Hypostatic union would be a loophole to both of these rules because they are both god and human at the same time. If there are any rules like this in this universe, it is the perfect way to get around them.

Not the answer you're looking for? Browse other questions tagged religion gods mythology .

7
How can a single clergy rule over a religion that has different interpretations of its deity?
5
Why would a religious organization allow independent cults to maintain demigod corpses?
1
How can entities maintain their control of their avatars across dimensions?
4
How can an avatar be prevented from containing a deity's full power?
5
How can a messiah be forced to incarnate pieces of itself thousands of years apart?
4
How can a transitory deity be put on equal footing with other members of a pantheon?
6
How can controlling the flow of time prevent you from altering history?
3
How can the storage space of an avatar be restricted to a standard size?
1
How can a hierarchy within a religion alter central beliefs that have already been accepted as a core tenet to its faith?