In my medieval fantasy world, there is the concept of the Five Pains for interrogation and punishment. Each pain correlated to a specific sense of the human body. Burning is used for touch, and a special chemical concoction is used for smell, etc. However, I have failed to find an adequate torture method which only targets sight.

How could a medieval society create something literally torturous to look at?

Feel free to take some liberties if your idea seems plausible but lacks real historical precedent.

Sometimes watching Pokemon can hurt you. One particular episode sent 685 kids to the hospital.

Twenty minutes into the episode, Pikachu stops "vaccine" missiles with his Thunderbolt attack, resulting in an explosion that flashes red and blue lights. Although there were similar parts in the episode with red and blue flashes, two anime techniques, called "paka paka"[a] and "flash",[b] made the scene particularly intense. These flashes were bright strobe lights, with blinks at a rate of about 12 Hz for approximately six seconds.

At this point, some of the viewers experienced blurred vision, headaches, dizziness and nausea. Some suffered seizures, blindness, convulsions and loss of consciousness.

That sounds pretty uncomfortable. Blindness might be a relief! In any case your medievals should be able to replicate Pikachu's technique.

Somebody already thought about it: abacination

Abacination is a form of corporal punishment or torture, in which the victim is blinded by having a red-hot metal plate held before their eyes.

Blinding as punishment has existed since antiquity, and was specifically documented as a form of torture in ancient Persia. A corrosive chemical, typically slaked lime, was contained in a pair of cups with decaying bottoms, e.g., of paper. The cups were strapped in place over the prisoner's eyes as they were bound in a chair. The slowly draining corrosive agent from the cups eventually ate away at the eyeballs.

An alternative was also to cut away the subject's eyelids, with obvious consequences.

There is a fungus called ergot (pronunciation varies), which mainly infects grains such as rye, wheat and barley. It produces alkaloids, which have various effects on humans. Some cause diarrhea and vomiting.

But of you can refine the alkaloids out of ergot... one of those alkaloids, called ergotamine, has a structure which is very similar to LSD. Lo and behold, it has also much the same effects. The visions from an acid trip should be quite disturbing for the average medieval person, due to their upbringing.

Medieval monks should be able to cultivate strains of ergot which produce more ergotamine than other alkaloids, thus being able to make drug bread. They could use this among themselves recreationally, and set some apart for torture. Simply feed a medieval peasant a loaf of ergotamine-laced bread and watch as they trip. When they sober up they will describe visions of hell.

Ergotamine can also cause gangrenes, necrosis and stillbirth, be mindful of those. Then again, you can't make an omelet without some gore, so...

Show the victim another person being tortured

This already happens in some fiction: the hero is just too tough to be broken by torture, so the bad guys begin torturing some other civilian. The hero almost always breaks immediately, knowing that the civilian can't tolerate torture and isn't willing to die a gruesome death for the cause.

The torture would need to be graphically violent. Stick with the classics: flaying the skin, fingernail stuff, inserting nails. A wire jacketnot graphic would probably fit the bill.

To limit this strictly to vision, put the secondary victim behind a big glass window, so there's no sound. Also, surround the primary victim with mirrors so there's no place they can look that won't give them a view on the torture. And tape their eyes open so they can't be shut.

Literally torturous to look at? Somewhat inspired by Willk's answer - how about simply a very bright light? If it's bright enough, even closed eyelids won't save you. To get this much light you can use either:

Then add some simple optics and mirrors that focuses it all on one person.

If the light also causes the face of the victim to heat up too much, add some air cooling. I believe a repurposed/modified blacksmith's bellows might do the trick. Or maybe just sprinkle the face with water.

Maybe making the light flash can also enhance the pain, I don't know. If so, then just add a rotating disc (shutter) with holes in it in front of the light which cuts the light off in regular intervals.

The medieval victim will get his/her eyelids removed first.

Then, a helmet is firmly attached to the head of the prisoner.

In the helmet, you mount a pair of upside down goggles.. 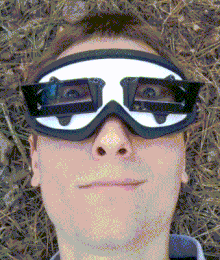 The resulting disorientation will confuse a medieval prisoner, beyond madness.

That was already used in medieval times and is called a pillory.

Although that's the exact opposite of what you're looking for as instead of torturing the person's sight itself, something worse is used: the tortured are put on display for the ridicule of all!

And it was so effective, that it was used until the beginning of the XXth century: 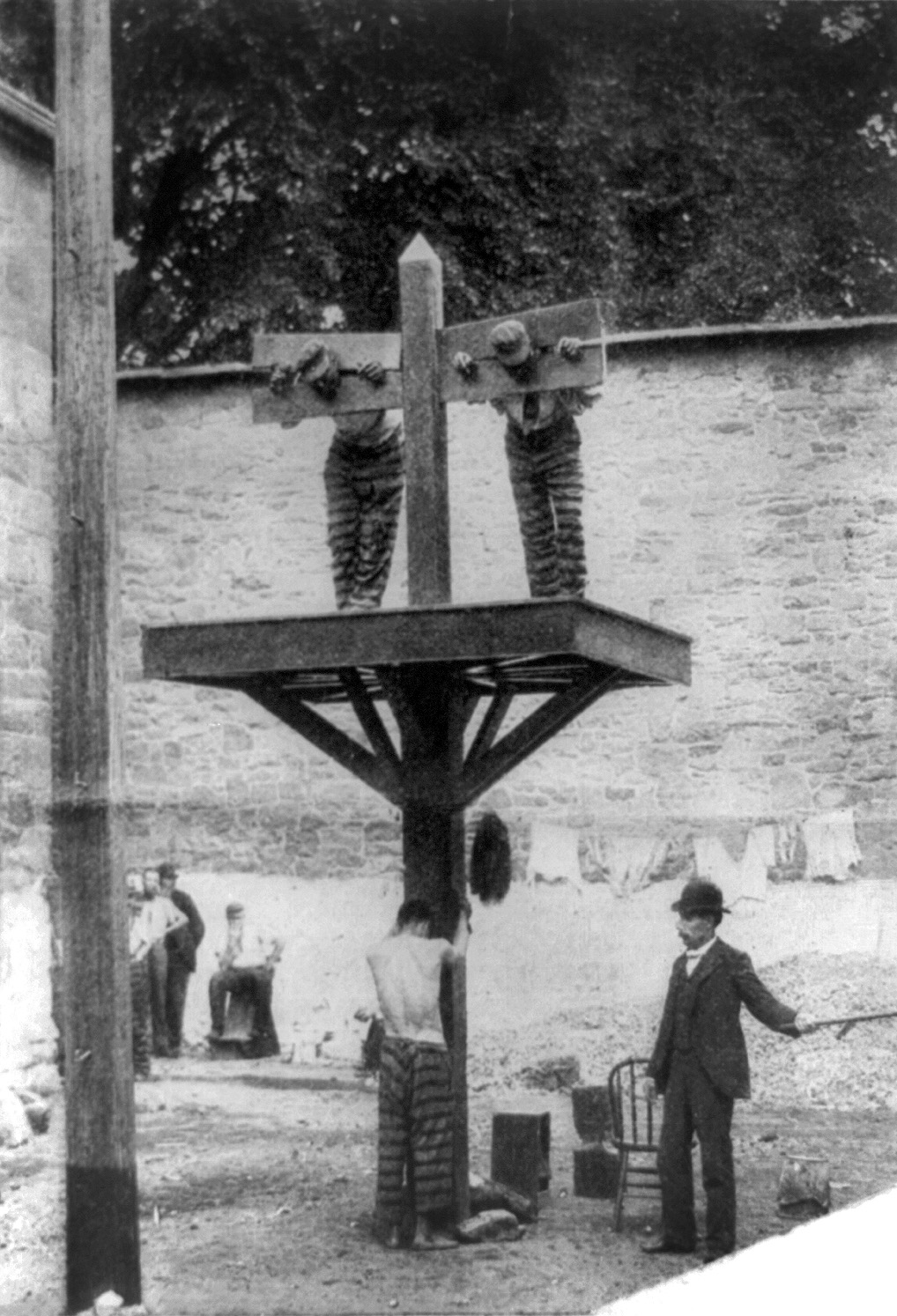 (The 2 prisoners on the top half of the picture are the example, not the one being whipped on the bottom)

Visual tortures are fine, but Orwell's 1984 had an especially fiendish one: starved rats in a cage attached to your face. You don't need to be squeamish to empathize with John's abject fear as the rats are fighting with one another in the cage, ready to tear his face apart. Substitute whatever small gnawing critters you wish and this torture need not touch the victim at all. And it's fully medieval.

A visual stimulus that induces flicker vertigo could qualify as a visual torture device, because it produces various uncomfortable effects, including nausea.

There is, in the midst of the Eastlands, a country where a particularly devilish torture is carried out. One famous archon of this land quipped that only an amateur torturer would blind his victim. The true artist sets up the torture such that the penitent is ready to claw his own eyes out of his head within the hour.

Penitents assumed guilty of certain crimes are fixated to a chair so they can't move limbs or head. The eyelids are sewn open and traction sutures are placed in the sclera so the eye itself can't move. Once positioned in the chair, the penitent is wheeled into a heavily walled chamber the wall of which is smooth and painted white. Upon the wall is a kit cat clock. Its hands do not move, but its tail and eyes do. The mechanism provides a constant and slow motion. Except for an annoying and random disjoint between the tock and tick.

The penitent is left to meditate on the timeless nature of crime and punishment. 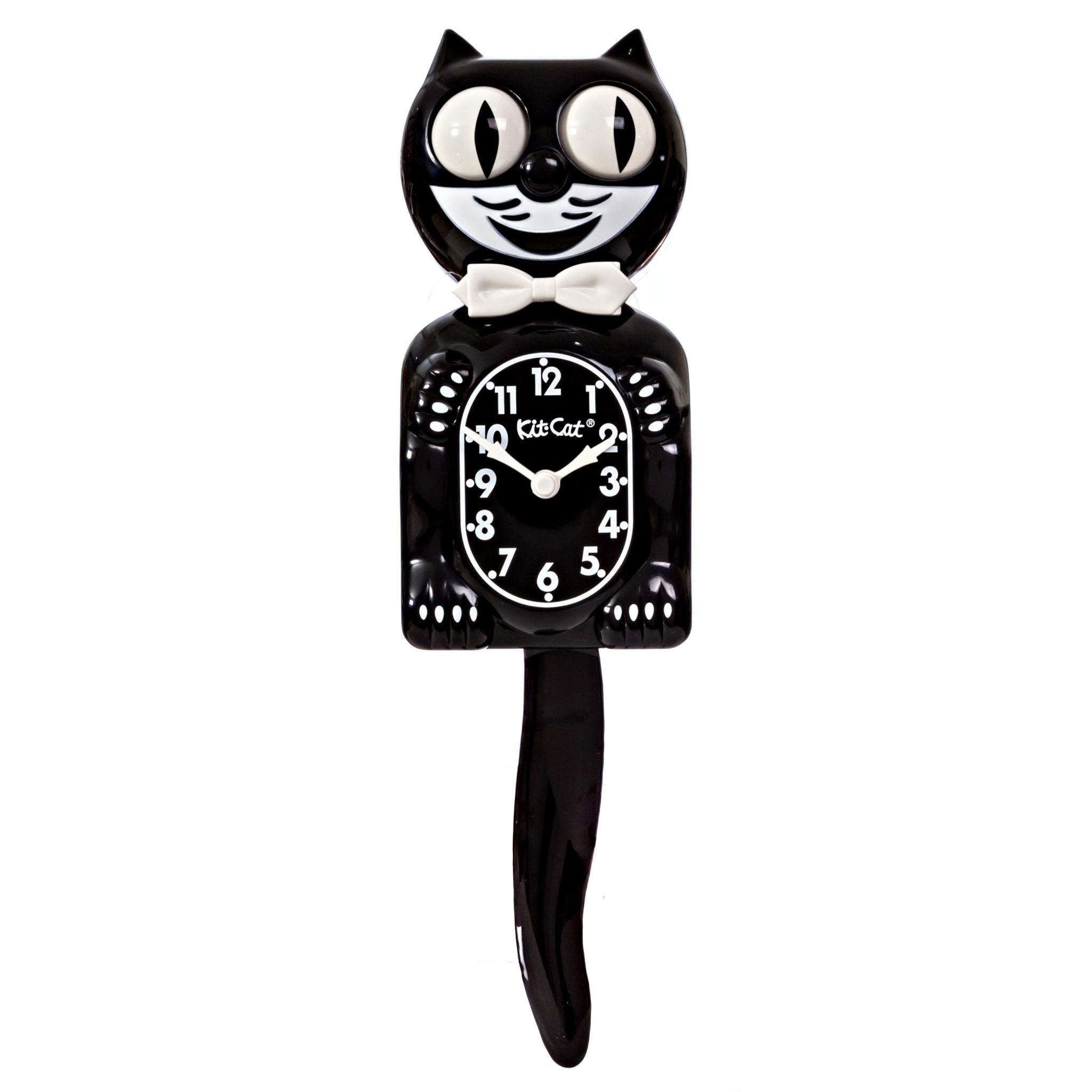 The strange-face-in-the-mirror illusion is a good candidate for this:

Participants reported that apparition of new faces in the mirror caused sensations of otherness when the new face appeared to be that of another, unknown person or strange `other’ looking at him/her from within or beyond the mirror. All fifty participants experienced some form of this dissociative identity effect, at least for some apparition of strange faces and often reported strong emotional responses in these instances.

This is after a 10-minute session with voluntary participants. Imagine what you'd see if it was against your will, had no idea exact what was happening, and were subjected to this for hours?

Step 1) Keep the prisoner in a dark cell for some days. When the eyeseight gets used to the dark for a long time it takes a while to adapt back to daylight and it can be painful.

Step 2) Bring the prisoner on a open place in full daylight and hang them upside down to disorient them.

Step 3) Two pendulums with two braziers holding a bright fire oscillate towards the face of the prisoner from two directions. The pendulums have different length and different cadence.

The prisoner even if they close the eyelids will see and feel the fires going towards their face. The upside position, the uneven rhythm of the combined oscillations will disorient them and the scare of getting burned will add to it.

Torturing someone visually seems pretty easy—just flash bright lights or hold their heads by a fire, and plunge them into darkness afterwards. Rinse and repeat as necessary.

As for the aspect of “creating something visually torturous to look at,” my suggestion as an artist is to take the usual advice of color theory, like “contrasting colors like red/blue tend to look good with each other,” and do the exact opposite. Or mention that they press-ganged a very unfortunate artist to paint exactly the wrong color combinations for their prisoners.

There’s a reason neon colors and huge washes are only used sparingly and referred to as “eye-bleeding;” because they’re not pleasant at all to look at.

Also, certain patterns like spirals and very dense maze/labyrinth lines are often said to trigger epileptic seizures; as a nearsighted person, I’ve found out a lot of them HURT to look at, because they make me dizzy if the lines start “moving.” It would suck royally if someone was FORCED to stare at those.

I suppose the obvious answer is to blind them, but that seems a bit permanent for the intention of the Five Pains as I am reading it. Maybe instead of something painful to look at, you could just do trauma to the eyes? Like, hold their eyes open with something and plunge their head in salt water or something. I was also thinking using mirrors to reflect sunlight directly into their eyes? Hope this helps <:

Not the answer you're looking for? Browse other questions tagged society medieval torture .

12
How can this prison induce Stockholm syndrome?

0
Knowledge of human anatomy - how effective (torture) is it in a medieval setting?
22
Medieval method of measuring temperature
1
Why might a species create a biological torture species?
2
Controlling Nanobots in the Bloodstream as a Form of Torture?