What would my phylogenetic tree composed of sixteen Homo species look like?

In my world, there are sixteen human species (mammalian species from the Homo genus):

Given these characteristics, what would their common phylogenetic tree look like, and what non-magical factors would drive the evolution of such varying human species?

With so many opportunities for cross-breeding, an overall branching tree of the species seems like a very poor approximation. However, for any given gene of interest (or at least a part of a gene, if there are interesting recombinants in the population), you ought to be able to plot out (at least conceptually) a valid adaptive radiation that looks like something Linnaeus might have drawn. (At least, provided the wizards haven't hexed most of the people so they transcribe somebody else's genetic code, and the vampires don't transmit their unique package of genetic assets like a virus, etc. Modern genetics is contingent on the facts and circumstances that made it possible to research it.)

It's your story and the odds of you using a taxonomy I might draw are low, but to give an example, one of your "magic" genes might encode a tiny pentagram of alpha helices that resonates with the extraterrestrial signal coded in the dark matter aura of the Inner Betelgeuse Dyson Construct. Perhaps sequence from a cholera formate channel transposed to the genome of a prototype elf-wizard ancestor, and you can track them through your demons and angels and such.

Edit: You will be happy to know my answer does not change, even if the Society Islands are renamed the French Antilles. Phew!

Stuff like "social as cheetahs", "housefly-like sexual dimorphism" or the difference between Greenland shark or giant tortoise senescence is bewildering to me. So I will ignore that part.

Here is your phylogenetic tree my dude. 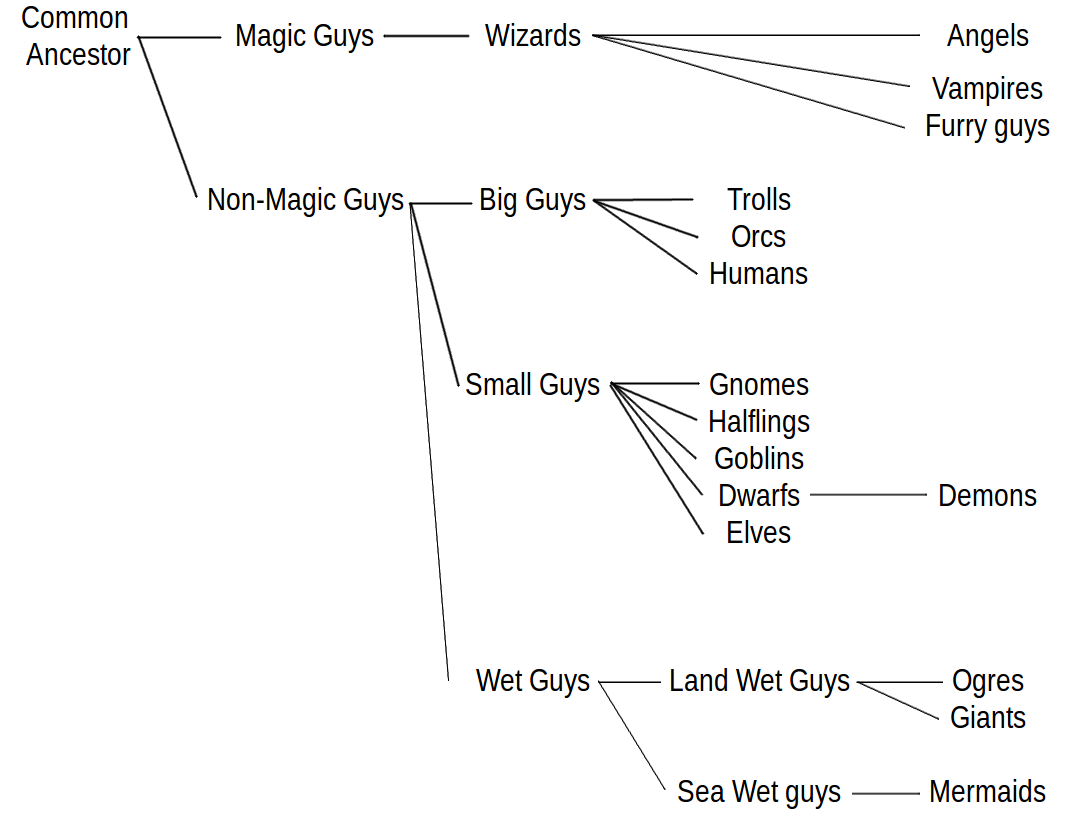 Angels, Demons, Vampires and Furry Guys were magically created as a joke by the Wizards. We know Demons were made out of dwarfs, due to their shared burrowing habits. But they are not telling about the other three.

Not the answer you're looking for? Browse other questions tagged internal-consistency biology evolution humans fantasy-races .