What would cause horse-riding cavalry to return?

Basically, what would cause an army to go back to riding creatures in cavalry, as opposed to armored vehicles.

You need to remove the factors that drove horses off the battlefield. The most prominent of those are:

Machine guns and barbed wire were in use at the start of WWI, and made horses impractical on the battlefield. They remained useful as transport across very rough country (and were used for that by some US special operations troops in Afghanistan in 2001-02), and for attacking rear areas (there were cavalry charges for that during WWII).

Tanks were introduced to allow attacks against machine guns and barbed wire, some time after it had become clear that horses weren't viable for that. Other fighting vehicles grew from that start as new needs developed.

Chemical weapons were introduced to try to break through the trench lines of WWI, but their success was limited.

To make horses valuable on the battlefield, you need a collapse of manufacturing, so that barbed wire can't be made in large quantities, and the millions of rounds of ammunition needed to feed an army's machine guns aren't available. Since both those things are fairly simple to make, you need to roll manufacturing back to an early nineteenth century state.

You can do this via resource shortages, or economic collapse, but either will have to be quite serious, and will have major effects on society.

This answer is based on the on the one I gave in THIS question. Short of giving intelligent hexapod horses functional arms to carry weapons in, you aren't going to change horses enough to make them practical on the field. But if the battlefield itself became hostile to modern vehicles, then whatever transportation could still operate would reign supreme.

So to actually carry men faster on the battlefield, or move supplies about in and quantity, you would need horses (or something like them). Infantry on horses with hit-and-run tactics would be more mobile than infantry. Any equipment in the direct field of conflict would get hauled by a horse or a horse-drawn cart.

Horses are still used in primitive conditions (especially in asymmetrical warfare) for hauling and mobility, but can't compete for these functions with modern equipment. So get rid of the modern equipment and see what happens. What is old is new again. 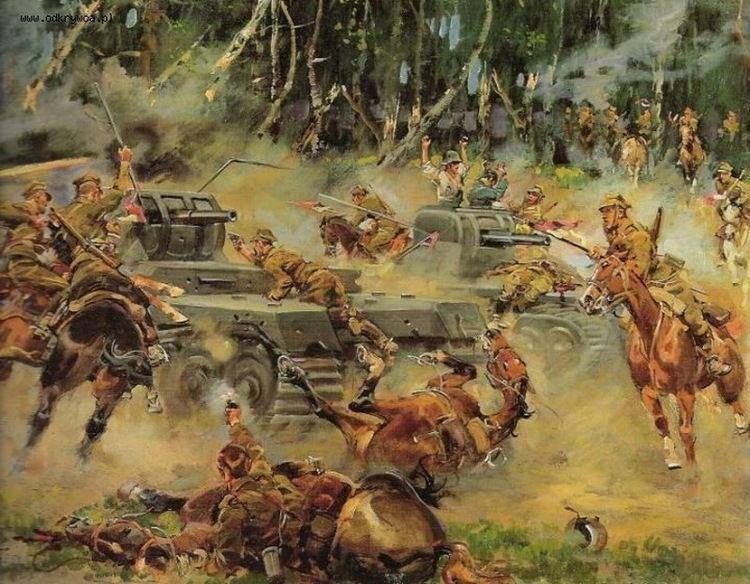 I was watching videos of drones blowing up Russian tanks. These tanks usually have infantry around them as tanks should. I thought that cavalry would be good for a surprise attack out of the forest. The Poles thought so too in the above depicted Charge at Krojanty. Now I understand there are fine points about how this really went down but Polish cavalry did really attack tanks and infantry.

In a forest operation horses can go places that vehicles cannot, and they can go faster than people on foot. A mobile operation harassing a force moving through a forest would be a good use of cavalry.

A specific example of depleted resources, a bacteria develops that has a particular taste for gasoline and other light-weight hydrocarbons. (Even more fun if it was developed secretly by some green-terror group and deliberately spread far and wide).

Maybe resources such as fuel has become so depleted that only large governments such as in the one in your world, are able to afford fuel for their armoured vehicles. This means most people use horses and other battle mounts as they of course don't need fuel. Also maybe iron and other metals have also became so rare that many can't afford to use them for vehicles.

If – for some reason – motor vehicles became impossible to produce or use, horses would be a good solution for transport to the battlefield. Dragoons originally dismounted for combat but then started to fight from horseback.

Another option is rough or mountainous or forest terrain which would also suit horses (or goats) more than tanks or motorcycles. Maybe not for riding into combat, but at least for transport.

Change the battlefield (but not in the same way as the other answer):

With one hundred years of military motivated selective breeding, you could ride almost what you want depending of the terrain:

There's a lot of places where vehicles aren't practical (and it's even more distinct when the terrain changes often).

The US military already has a need for actual mounted cavalry, and various reports are issued on a yearly basis about the problems associated with the lack of.

While tanks and jeeps (humvees now, I guess) are meant to go offroad, they have limitations that preclude them from going through the roughest sorts of terrain. Often though, that's the exact place you need to send soldiers. Think "mountains of Afghanistan" though the problem isn't exclusive to that country. A soldier on foot can, in such terrain, move only 2-5 miles per day or something like that. It's not really an option to have them carry less stuff so that they can travel a few miles further.

The solution is for the military to have horses (and mules). They don't need gasoline or diesel, the things run on some grass or plant life you can usually find along the way. They can travel up inclines almost as well as humans themselves can, and they can carry alot of equipment with them if needed.

This solution isn't implemented for various reasons, one of which that the military has an incredible amount of inertia and often refuses to start doing what hasn't been done yet or refuses to stop what it has been doing. But probably the most pertinent is that it would cost alot to do this, for only small benefit. The animals are large, costly to maintain (and not just the animals, but having an actual corps or department to care for them, to train, etc), costly to move to the theater where they'd be used, and costly to return home once the mission is over. Even just training some soldiers to ride would be a not-inexpensive proposition.

Now, that said, this isn't "every soldier gets a horse" with big long lines ready to charge into the field of battle. This would be equipping a platoon or a company for specific missions, after which they might have the need again for a long while (or ever).

This is really just an elaboration on John Dallman's answer - In a world without good compact power sources, animal power is needed. If we have strong enough armor to make an exosuit that is as effective against a machine gun as tank armor, then a horse could easily serve the same purpose as a tank. Riders could have similar armor and powerful rocket launchers to replace the munitions aspect of a tank.

Barbed wire is easily solved with some kind of lightweight plow (It already poses no cutting danger, but could still trip a horse), and the exosuit could incorporate a gas mask for chemical warfare

TL;DR, it comes down to these points:

Let us assume there's a stellar scientific research laboratory that has excelled in genetic engineering and mutations. They were able to create powerful war machines after mutating generations of domestic and wild animals. We are not talking horses or camels that run fast or elephants that are heavier. Imagine a rhino-horse that can run swiftly and can breakthrough enemy barriers including concrete walls. Mammoth elephant with the bone-strength of adamantium that can fully crush a tank if it stomps. Large wolf/cat-beasts that can bite/scratch steel.

Eventually it does come down to the source of fuel. Especially because fuel is the cost of operating a vehicle. Mutant-beast cavalry is a good fit for armies that reside in very inconsistent/difficult terrains which are devoid of fuel material and abundant in food. You can refer the climax fight of James Cameron's Avatar if you haven't already.

As someone had pointed out the use of modern artillery, either you can make the opponents not use them (which would be pretty anti-climatic) or design your army's battle strategies so that it will seem your army has the upper hand. For example, your army is fighting against the enemy in a rocky mountain rain-forest and the enemy has tanks and 4-wheelers, etc. As long as the enemy has all his ATVs/Aerial units functioning, they might win. Find a way for your army to get those numbers down, victory is yours.

Then again, battle strategy would be entirely up to your story scene. You might choose to keep a head-on battle also. Personally, not a favourite.

It could have become "dirty" or "not honorable" to fight wars with the stakes of the whole population of a country. Only a small military that is even standardised (every country has exactly 1000 soldiers, etc.) can do it similar to a sport. Think back to the concept of the duel over 100 years ago, that ha quite similar concepts.

While it's fine with civilian technology, any fief that takes on its neighbour had better use technology from prior to 1850, or it'll be instantly obliterated by the government's nukes or space mounted orbital laser systems immediately.

So horses it is! And duels. The Catholic Church tried to regulate and even ban crossbows for a while, it's not as silly as it seems.

Your enemy has an equine phobia so intense it paralyzes them into utter inaction at the mere sight of horses or hearing the approach of their hooves clopping.

One thing that would cause horses to turn back is several rows of pikes. This was a defense against superior cavalry numbers utilized by infantry on foot. It is difficult to forc a horse to impale itself in a row of spikes as long as say 19 feet long. This is what their main purpose was to defend against cavalry attacks before gunpowder became a standard in European armies in particular. Later, bayonets would be used the same way and perfected in a units ability (typically by battalion or company) to "form square" This required alot of training and discipline, if aught off guard and breached before they could form, usually in 4 sided "squares" 3 ranks deep as i battle at Quatre-Bras as a ptequ3lhere British (Scots and Coldstream-Guards forces repelled marshal Ney where they were held off after many repeated attempts to use infantry to force them to present a single line just to then try to force a way through by charging with cavalry before they could form square again

Not the answer you're looking for? Browse other questions tagged warfare modern cavalry .

19
Mounted Cavalry in the Modern Era
4
Could genetically engineered horses make cavalry survivable on a battlefield with modern technology?

24
What advantages would bovines have over horses when used as cavalry?
5
Roman bike charge
13
How can infantry and light cavalry defeat heavy cavalry in a valley?
3
How big would a giant pig need to be in order to carry a 10-foot tall humanoid on its back?
10
Knights vs elvish guerillas
4
Is The Use of Mounted Infantry a Viable Tactic for a Nomadic Empire?
5
Could Bronze-Age Nomads Effectively Utilize Chariots for Warfare?
4
Could genetically engineered horses make cavalry survivable on a battlefield with modern technology?
5
How do paved roads affect the wear and tear of iron horseshoed cavalry?
27
What would cause city walls to return?