What evolutionary pressures would lead to Gnomes?

In a universe I am creating, there are many living species of humans (mammals from the Homo genus) (for example, there are ogres, giants, merfolk, halflings, dwarfs, and goblins). One of them is called gnomes (their scientific name is Homo minimus) (that means "tiny human"). Their basic characteristics include:

Insular dwarfism, a form of phyletic dwarfism,[1] is the process and condition of large animals evolving or having a reduced body size[a] when their population's range is limited to a small environment, primarily islands. This natural process is distinct from the intentional creation of dwarf breeds, called dwarfing. This process has occurred many times throughout evolutionary history, with examples including dinosaurs, like Europasaurus and Magyarosaurus dacus, and modern animals such as elephants and their relatives. This process, and other "island genetics" artifacts, can occur not only on islands, but also in other situations where an ecosystem is isolated from external resources and breeding. This can include caves, desert oases, isolated valleys and isolated mountains ("sky islands").[citation needed] Insular dwarfism is one aspect of the more general "island effect" or "Foster's rule", which posits that when mainland animals colonize islands, small species tend to evolve larger bodies (island gigantism), and large species tend to evolve smaller bodies. This is itself one aspect of island syndrome, which describes the differences in morphology, ecology, physiology and behaviour of insular species compared to their continental counterparts.

Your future gnomes dispersed onto a small continent with a highly porous karst topography, full of caverns and hidden water sources. The surface is poor in rivers, high in elevation. The trees that grow there would be small and stunted, save for one remarkable species whose taproots can navigate small deep cavernous passages and pierce dozens of meters of solid limestone. These trees have full access to deep reserves of fresh water, and the nutrients that can be found there. Growing to immense size, spreading by stolons across the landscape, they diversified into a highly successful genus.

In this process, the trees compete with one another, but not so much that they prevent one another from seeing to one of their basic ecological necessities: they need fixed nitrogen. Nearly all the trees pump excess glucose and fructose down their taproots into the caverns, where they nurture symbiotic bacteria acting in a loose association comparable to the root nodule of a legume. However, these bacteria have not evolved into a tight physical association with the trees as of yet, and the underground ecosystem is far more open-ended. There are many puddles of sugary water laden with bacteria and yeasts, fed by the tree roots so long as they contain sufficient fixed nitrate. The dead taproots decay into hollow tubes that ensure a vigorous air circulation that brings in fresh nitrogen to fix, and also permits the habitation of some organisms. The gnomes are small due to the need to traverse small passageways as well as "insular" dwarfism within individual cave systems.

Just so, we see the colonization of the underground landscape not just with bats and the rich fertilizer they produce, but also with humans that evolve to become small and capable of seeing by what to us is the dim light of autofluorescent bacteria. They feast occasionally on bats, but more often consume bits of the sugar and alcohol-rich nectar the trees leave behind, being careful not to destroy the resources that sustain them. They are unfortunately prone to osteoporosis because although they receive an endless supply of calcium from the limestone, they have very low intake of phosphate. In the end their feces and their corpses return their nutrients to the ever-circling roots around them. But perhaps their greatest contribution is in their mining - scraping new passages into the stone that improve the carrying capacity of their environment for untold years to come.

Evolutionary Pressures are not science-based

(One thing you ask for evolution to cause is better eyesight. That was answered here. Evolution works this way for everything else you ask.)

The tags “Evolution,” “Biology,” and “Science-based” can’t be applied to this problem because evolution does not lead to anything; it has no goal and no “survival instinct.” In other words, DNA doesn’t have a brain. What this question asks for is Lamarckian inheritance. That can’t have the science-based tag, an evolution tag, or a biology tag.

None is the science-based answer.

But to help your story-based problem of having naturally occurring dwarves as a species (which of the 23 science-based definitions of that you are using here is not stated), the problem seems to have already been partially solved in the real world by deleterious and disadvantageous genetic mutations.

was born in Nepal, grew to a height of 54.6 cm in height (the average cat is 46 cm—a comparison asked for in this problem) and lived to a ripe old age of 75 years. 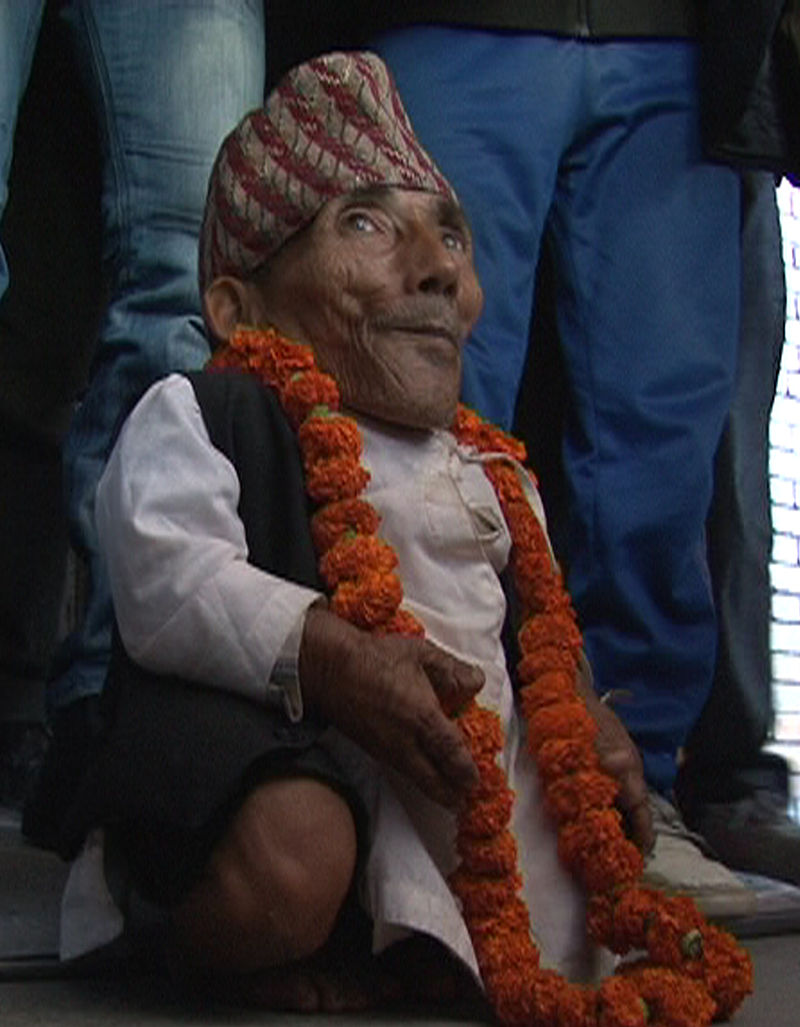 The medical condition causing Chandra's size has never been determined, but obviously some condition does exists which can do it.

It is impossible to say if Chandra's condition could at some point become a new species without diagnosing the condition. His woman counterpart however, Jyoti Kisange Amge, was diagnosed with one of the 5 known types of primordial (genetic) dwarfism, which would be the only ways a new genetic species could arise; which are:

No evolutionary pressure can cause any condition to happen, however, as mutations are a stochastic process, the probability of a dominant form of dwarfism surviving can be affected through the evolutionary pressure of a reduced gene pool. Diversity will likely prevent primordial genetic conditions from gaining a foothold in a population because normal, healthy humans have rigorous DNA repair mechanisms which can correct these mutations in later generations, and wipe out the mutations which created your "species."

Thus the process of creating a dwarf species is four-fold:

You can merge two of the answers to get a somewhat good answer...

Lets say their ancestors were normal people from a society that lived in the surface. They used to outcast or abandon their deffective offspring (I think spartans used to do so, throwing them from a cliff). So, babies with dwarfism would be left out and the few that survived ended up forming a little society in the caves where big people could not follow and kill them.

Their normal children would be left in the surface, die suffocated in the tunnels as they grow, or be sacrificed, as you like. The point is that the "big people" genes would be slowly removed from the gene pool until only the ones with dwarfism were left. Then something happend to the big people and left the small people, lets say they were decimated by orcs or something.

The species could have then evolved privileging smaller individuals that could navigate further in the tunnels, slowly becoming your current gnomes. I can think a lot of wrong thing with this... For example, a stable society living in a fixed place would most likely be farmers, so not so far in time to let a new species evolve from them.

Another option, you can say you have a peacefull society with a tendency to dwarfism, so its normal. Then a new species appears and hunts your humans (lets say orcs again) and the only ones having a chance of survival are the ones that can fit into the tunnels and hide/live there. As before, normal humans would not survive outside because of orcs nor inside because of their size, effectively letting live only the smaller individuals. The most difficult part sould be having a big enough dwarf population in the tunnels to start with...

The discovery of the aplinium tree forever changed human society. The aplinium fruit was a potent aphrodisiac that guaranteed the greatest pleasure and fertility. Wild trees that grew in harsh forests resisted every form of domestication; the fruit of such trees blossomed once per season and only for a few hours, as the fruits were also favored by the local wildlife. Only the tallest humans could harvest them, and harvesting meant proliferation.

The shortest humans were quickly rejected from society as being unfavorable mates. Often expelled from local communities, these humans formed their own colonies in the dense forests, determined to develop their own means for harvesting the coveted fruit. Without access to forges and tools, these humans evolved to use the bounty of the forest for their survival. Over generations they become shorter, as the taller of them were scorned for being like the others - the foresakers of the kin.

The shorter humans soon discovered that the roots of the aplinium trees were rich in the same active chemicals of the fruits, and developed various means for extracting these chemicals without harming the trees. Shallow underground caverns wound gently around the roots of the trees, tapping the sap of the tree at various locations under the earth. Shallow tunnels led to deep and vast complexes, providing shelter and communal space for the society hidden away from the predators above.

With the the aid of the aplinium sap, gnomekind was borne, with little regard for those who banished them.

You don't want evolutionary pressures that lead to gnomes

For some reason, I think a lot of people think evolution works like this:

But that's very wrong. As in this answer, the idea of evolution having a goal is wrong. Evolution is not about survival of the fittest or creating better organisms. Instead, organisms that are fit enough survive and those that are not fit enough do not. How evolution (in general works) is more like this:

#3 is a problem if you still have humans in your world; if humans die off and gnomes survive THEN that's evolution, but if humans and gnomes co-exist that's not evolutionary pressure, that's just random variation.

Having a group of more gnome-like people separate from humans at some point in the past should be enough to make them genetically distinct. The rest of your requirements (blood type, etc.) could easily just happen by random chance.

So to have gnomes, the only real requirements are:

Not the answer you're looking for? Browse other questions tagged science-based biology evolution fantasy-races .

5
What changes might happen if a group of people began living in a cave full-time?
3
Why would a species from the Homo genus have overwhelmingly B negative blood type?