My airships in combat come upon each-other and initiate combat with their 12-foot long-tom guns. My problem is, I don't know what range they would be at when they decide to fire, because the post-apocalyptic world has a thick and toxic air. The air density is 65kg/m$^3$ (about 52x normal air density), greatly reducing effective range of projectiles. So the gun has a modification, which I hope will improve the range.

The gun is only slightly modified by placing a light-weight plate over the lip to seal the bore. The sealed bore allows a crank near the trunnion to pump air out of the cannon, reducing the air density to 20 kg/m$^3$

What is the longest lateral range this weapon can achieve in my world?

I'll go with a drag coefficient of .3, which doesn't seem that great but keeping it at both sub- and supersonic speeds is pretty good. You've quoted a 6.5" calibre, and that, unfortunately, is going to make life difficult for you. As Zeiss Ikon pointed out elsewhere, a good reason for having a bullet-shaped bullet is that you can squeeze more mass into the same cross-sectional area without unduly affecting drag or aerodynamic stability. Your projectile has the mass of a 6.5" diameter iron sphere, not a 6.5" diameter iron bullet. This results in a lower ballistic coefficient, which in turn leads to worse performance.

So, here are some trajectories with various elevation angles, showing maximum possible range. The 0-vertical-height line shows the altitude of the firing airship. 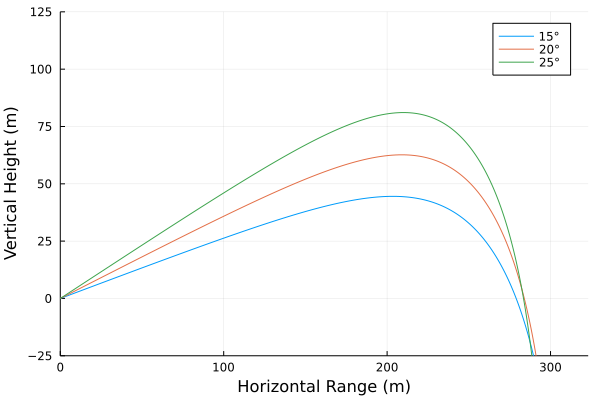 As you can see, you can't realistically reach even as far as 300m... that's clearly a maximum range, but it isn't the same as an effective range.

As you didn't define effective range, I can't really give you a definitive answer. In the real world it depends on your ability to hit your target, and once you've hit it, actually do damage. I'm not going to tackle accuracy here, but the striking power of your projectile is going to be strongly influenced by its speed.

Here's a plot of projectile speed vs the horizontal distance travelled: 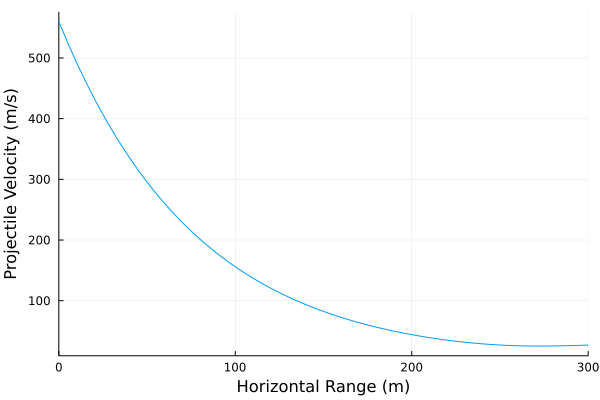 I've generated similar charts in one of my answers to your related previous question, and as you can see it doesn't look great. It would be up to you to decide how fast a projectile has to be in order to be going fast enough. Your ~16kg round travelling at ~100m/s has ~80kJ of kinetic energy, so it will still pack quite a punch against softer targets.

If 100m/s was taken to be the standard of effectiveness, then an initial elevation of 0.5° will give you an effective range of 135m, with a projectile drop of only 15cm (so the trajectory is basically flat).

The conclusion I came to in the other question was that you shouldn't be firing balls or even bullet/shell shaped things, but much more aerodynamic things if you want long range or high impact energies. Rocketry might also be a good idea, but that is definitely a subject for a separate question.

Air drag is proportional to air density. Very optimistically such a cannon could fire at 2 km in our world. And only 40 m in your world.

Evacuating the barrel from 50 to 10 atm pressure will improve the nozzle speed only by a few % and doesnt worth the effort. Most of acceleration happens at pressures of 100-1000 atm.

You can increase your range by another x10 if you add wings to your rocket and optimize its shape to be more like a plane. Keep in mind wings are small, more like a wing in ground effect. 4 km

You can increase your range by another x10 if you use maximum altitude advantage. As rocket falls it can glide forward. If you can climb at 4 km higher than your opponent, range is 40 km.

You can increase your range by another x10 if you use an engine instead of a rocket. At this pressure internal combustion engines are extremely powerful, as you get a lot of air. So even a tiny engine will provide extreme power, be it piston or jet. Most of the benefit is for use of gasoline instead of gun powder. In particular pulse jet, that requires no moving parts, and can be done with rather low metallurgy compared to all other jet engines. 400 km.

Your air battles are more like submarine battles. With torpedoes. And helium or hydrogen filled chamber in your 'torpedo' can make its range extreme. Slower the speed - longer the range, and the floater provides all the bouyoncy needed. Also fire is way more dangerous, and hydrogen tank explosion are also way more dangerous, this way floater and warhead might be the same.

And all the anti-torpedo things, like guns, have the same problem with their range being tens of meters at the very best, so slow torpedoes cant be easily shot down.

Cannons, as you showed them, are completely useless in your world.

Not the answer you're looking for? Browse other questions tagged science-based physics warfare guns .

21
The deaf prisoner got her secret message and the pirates never knew. How was that possible?
8
Why can't the military stop my hidden pirate haven from illegal gambling and smuggling?
4
Airship combat in dense atmosphere - What charge for 26-lb cannons?
1
Could this world use a buoyant ballistic weapon?

6
How effective could a steam cannon be compared to a range of conventional weapons?
5
Options for biological high-density energy storage within the human body
1
Plausibility of a plastic/polymer at least as dense as iron for applications requiring high density
1
Could this world use a buoyant ballistic weapon?