Airship combat in dense atmosphere - What charge for 26-lb cannons?

For an airship combat scene with cannons on a world with a dense atmosphere, what would be the powder charge for effective beam-to-beam attacks at a 100-yard range?

The projectiles are 26-lb cannon balls, The charge is black powder, the cannon weighs 200x the cannonball. Assume the cannon's max elevation is 15°

Drag force $F_D$ increases linearly with the density $\rho$ of the medium producing it.

With a 0th order approximation:

According to this article (see table, scroll down some), the common powder charge for a 26 lb. naval gun in the 16th century was 14 lb -- or just over half the weight of the ball. Charge sizes were often determined (over multiple generations of test articles) by how big they could be without blowing up the gun, so if your guns are patterned after a historical piece, I'd recommend using the same charge.

A little later in history, a cannon (used by both sides) in the American Revolution (1770s) and again in the War of 1812 had an effective range of 1000 yards (this is at comparable elevation; higher angle would be a howitzer). With 65 times the air resistance, this range would surely be shorter, likely a bit less than half, but a couple hundred yards is easily practical. Also note that while these were land cannon, they were actually smaller than the 26 lb. units you're asking about -- and with black powder, large guns usually had longer range (pressure was limited by the propellant and barrel, but a bigger ball had more driving force from that pressure and larger guns generally had longer barrels as well).

At close ranges, it was much more common to fire "canister" -- essentially making the tube into a huge shotgun by firing lots of balls smaller than a pound. Howitzers would fire "shrapnel" which added a timed-fuse bursting charge to spray the balls after delivering them all together to the burst point.

TL;DR: you're asking the wrong question. You can't overpower the thickness of the atmosphere by using a bigger charge, you need to use much more streamlined projectiles instead.

Having spent 0 effort, I couldn't find information about a 26lb cannon, but I did find this 24lb cannon factsheet that gives a muzzle velocity of ~525m/s. I'll ignore the (probably serious) muzzle speed reduction caused by the dense, high pressure atmosphere for now, but consider that actual muzzle velocities will be substantially reduced compared to real-world historical guns. I'm also going to give your projectile a constant drag coefficient of 0.4, because fluid dynamics is hard and the one place where using a sphere makes everything worse.

I've used an elevation of 0.5°. Given the density of the atmosphere, there's little to gain by larger elevations. Here's a graph showing the projectile velocity vs horizontal distance... muzzle velocity is where distance is 0. 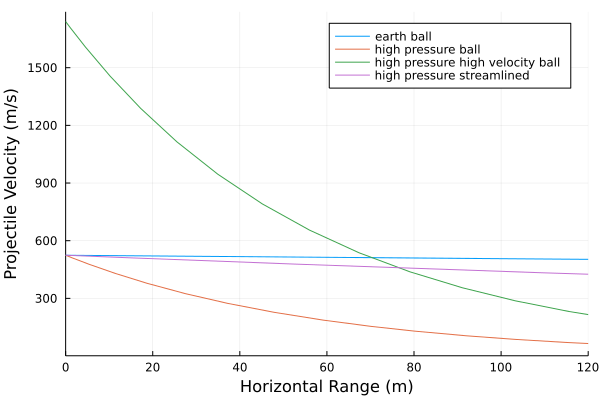 As you can see, the unmodified cannon simply doesn't perform at all well. Its velocity is massively lower at your desired range than all the other options, making its damage potential significantly lower.

Interestingly though, you can see that massively boosting the muzzle velocity just doesn't help very much... that $v^2$ term in the drag equation just bites you that much harder. If you somehow managed to make a black-powder weapon which had a muzzle velocity equivalent to a modern smoothbore APFSDS round, it still only manage about 60% of the realistic earth-based cannon's velocity at at 100m, and it is dropping fast enough that its range will still be quite limited. All that crazy engineering for little reward!

The final purple line shows you what you should be doing. Clearly the thick atmosphere is still bad news, but reducing the drag force by 90% has significantly helped the projectile's velocity at range, helping improve both damage at close range and maximum effective range.

In order to maximise the effective range of a black powder gun under conditions of high atmospheric density, simply increasing the powder charge is not going to do anything but increasing the risk of bursting the guns, and increasing wear.

Obviously, to increase the ranges of a gun, we need to increase the velocity. To do that, we can increase the powder charge, and/or increase the length of the gun in order to increase the use of the existing charge. The Culverin, a particularly long gun, had a point blank range (similar to effective range) of 1700 yards and a maximum range of 6666 yards. In an atmosphere 65 times as dense, we can reduce those ranges to 1/65th: 26 yards and 102 yards... can't we?

No. Drag does not affect range in this manner. Drag simply robs a projectile of kinetic energy by a process of friction. drag will be 65 times higher, but that doesn't mean that the ranges will be 65 times shorter, just that the projectile will lose kinetic energy faster... and the formula for kinetic energy is e=½mv². As kinetic energy is lost, v will be reduced, but not in a linear fashion. Additionally, while drag is proportional to atmospheric density, it is also proportional to the square of velocity. This means that velocity will be lost most rapidly as the shot exits the muzzle, but the rate of velocity loss will fall off. Also, when a projectile hits the ground (or at least returns to the altitude from which it was fired, it still carries significant energy. Obviously, if drag is higher, it will carry less, but it will still not be zero.

So if nothing else changed, that would make the effective range of our culverin 217 yards and its maximum 850 yards... still within the OP's requirements.

However, we also need to consider the coefficient of drag (Cd), or how smooth the projectile is. Black powder ammunition was spherical and often rough due to the fact that it was made from chiseled stone or rusty iron from which the worst of the rust might have been chiseled. A smooth sphere is reckoned to have Cd=1, so a rough sphere would have a higher Cd. However, an elongated shape can have a lower Cd. As drag is proportional to Cd, reducing Cd would be very important.

Combining an increase in mass and a decrease in the coefficient of drag would get us to something like an ogival shell. If we're still using smoothbore black powder guns, we could put tiny stabilising fins on the back (in atmosphere this dense, you wouldn't need much fin) and shape it like a fish, relatively blunt at the nose, and tapering toward the tail. Make it from steel and fill it with lead, and polish it, and you'd reduce the Cd and increase the range a lot... and make it harder for armour to stop.

With drag effects this strong, don't tell me that people wouldn't work out more ways to overcome them than simply "more powder".

Not the answer you're looking for? Browse other questions tagged science-based physics warfare .

8
Why can't the military stop my hidden pirate haven from illegal gambling and smuggling?
4
How to maintain large ships in hostile atmosphere?
5
Maximum effective range for a modified Long Tom cannon in high density?

5
Flying Battleship/ Armored Airship Combat
18
How to realistically implement magic-users in medieval warfare?
14
How to correct aim in aerial airship combat?
8
Could a mass-proportional physical speed limit on projectiles "nerf" guns but not ruin archery?
1
Naval cannons vs ships made of magic wood
7
The eating habits of metabolic wizards
6
Size cap for alien sky-whales on a high gravity dense atmosphere planet
4
Weather for a dense-atmosphere water world
5
Maximum effective range for a modified Long Tom cannon in high density?
1
Could this world use a buoyant ballistic weapon?