Researching efficient methods of no-FTL methods often turns up engine solutions that are efficient in the sense that they have a higher specific impulse, but most such solutions seem to have a comparably low acceleration, which is well and all when it comes to travel but not necessarily for dodging stuff.

The kind of space combat I am envisioning rarely involves dogfighting per se; they are more strafing battles at fairly long ranges (by planetside standards), but you'd want high acceleration every now and then to move out of the way; smaller fighter craft might get fairly close, and unmanned drones especially so; the latter are not limited by the fact that humans will die at too many Gs either.

The setting has fairly decent fusion power for energy generation; even smaller spacecraft ("smaller" meaning >=80m or so) have a fusion core that can power your choice of engines and weapons. FTL does exist in the form of Alcubierre warp but it is not precise enough to be used for in-combat maneuvers. I'd rather not have more handwaved magic technology than this; thee is no gravity manipulation for "inertial dampener" BS and spacecraft hulls are fairly fragile, though resilient enough that acceleration would kill crew before tearing apart the hull.

Dogfighting as we understand it isn't going to happen in space, because the iron laws of rocketry demand that we need to carry fuel to accelerate to the mission area, decelerate to conduct the mission and turn around, accelerate back to the base and decelerate once home. This would require something on the order of 8X the mass of fuel needed just to send a similar sized missile on a one way journey to the target. From a practical viewpoint, I can send 8 missiles at you for every fighter you send, so eventually you are going to be overwhelmed in a saturation attack or just worn down by attrition.

But since no one is too keen to read about a missile duel, there is an out: LEO aerospace fighters. A ship in low orbit will be much harder to detect since it will be either shielded by the planet itself (once it passes below the planetary horizon relative to you), or lost in the infrared and visual "clutter" of the planet below, one of the few exceptions to the "no stealth in space" meme. If the ship is highly streamlined, as it must be to exit the atmosphere at orbital velocity, it can also execute various manoeuvres by interacting with the atmosphere, including large plane changes, large velocity changes and even deorbiting to refuse combat (while you look disappointed at the reentry plume, his wingman is coming up from another orbital angle...).

The vehicle can be surprisingly simple. In the 1980's, the US Navy considered a "space cruiser" based on an ICBM reentry vehicle, modified to hold an astronaut who wold be launched from an SLBM tube to conduct surprise inspections of Soviet space hardware. (This is conceptually as exciting as flying biplane fighters off Navy airships in the 1930's). the long slender cone would carry the astronaut in the large part of the cone, with fuel tanks in the "pointed" end and a ring of small rocket engines around the base of the cone for orbital manoeuvres. This would actually be about as large as a WWI era fighter plane, so going bigger (a cone the size of a WWII era prop fighters like the "Bearcat") would provide more fuel for manoeuvre and the ability to carry some missiles or a cannon. (A laser weapon would be much larger than a "fighter" because of the need for a powerful generator, the rage pointing mirror at the end of the optical train and the heat rejection apparatus, especially since lasers often have a ratio of 5:1 between input power and laser energy emitted).

The space fighter wing could even be based on Earth for the most part, making routine maintenance of the fighters much easier and giving the pilots the sort of lifestyle and amenities that pilots seem to think is their due. Because these are fully fledged spacecraft, they could be kitted out with "drop tanks" of extra fuel and life support and carry out missions as far away as the Moon, greatly extending the utility of the force (although any advantages of being able to use the atmosphere to manoeuvre are lost).

So from a very specific perspective, we can envision "dogfights in spaaaaaace!"

Circumvent part of the problem by not having a rigid-bodied spaceship.

Moving, extending, or retracting heavy arms will do this. It's effectively a side-step in space that requires no propellent. Pumping fuel and quickly shifting cargo has a similar effect.

If you want a rigid body ship, then make it a flying saucer. When an trying to avoid being hit, orient the ship so the smallest cross-section is showing. Then do a second rotation to avoid shots that are still lined up with your exposed side.

Anything that's still going to hit is aiming at one of two things;

It's hardly as exciting as a dogfight, but it seems to be a more efficient and, if done correctly, reliable way to defend your ship.

It's probably not the best solution but I can think of one way: Exploit Newton's 3rd law.

For fast acceleration every now and then, you can fire a heavy object very fast in the opposite direction you wish to travel. For example, if you wish to dodge right to get out of the way, you'd eject a lead ball (or something else that would be heavy but dense enough to carry many of) from the left side at a huge speed (maybe several times the speed of sound). It would be enough to change the velocity vector of a small ship towards the right fast enough for you to get out in time.

You could also fire several smaller projectiles for large ships, but the concept is the same.

It isn't a fusion power plant but it is nuclear power and it might work for your "fighters".

This engine has some disadvantages
There is a minimum size to this engine. 33 (metric) tons may be way too big for your fighters.

Naturally in such a spacecraft, damage to the fuel tanks can have unfortunate results (say, damage caused by hostile weapons fire). Breach the fuel tubes and you'll have a runaway nuclear chain reaction on your hands. Inside your ship.

The advantage of NSWR is that this is the only known propulsion system that combines high exhaust velocity with high thrust. The disadvantage is that it combines many of the worst problems of the Orion and Gas Core systems. For starters, using it for take-offs will leave a large crater that will glow blue for several hundred million years, as will everything downwind in the fallout area. 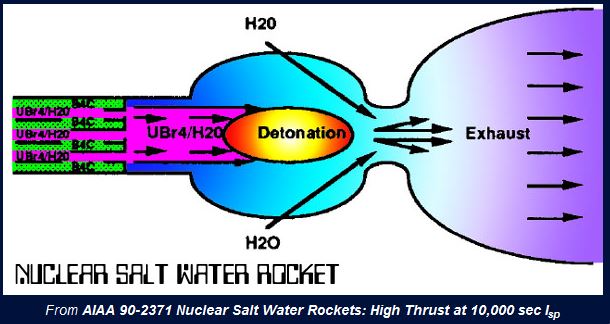 Not the answer you're looking for? Browse other questions tagged space-travel science-fiction or ask your own question.