They made first contact and sent us engine plans, but how can we possibly build it?

This is a prequel to a relativistic interstellar trade scheme I am currently building on.

An alien culture has sent a signal with design plans for solving an advanced anti-matter engine, allowing us to store large quantities of antimatter in a Minimum Magnetic Field Trap. This is first contact, no prior communication has happened—in either direction. They know nothing at all about Earth and sent the message out in the blind. It is a pulsing light message from a star, which simply repeats.

They have no idea what an "inch" or a "second" or a "kilogram" is (how could they? It's first contact). They sent us a complete set of instructions to make this engine. But, it needs to be 18.85 gwelrits long, connected with 3 triamed diameter Zinc wire, and we must never exceed a temperature of 7,139 Wodnurbs for more than 32 dyups, or it will explode, Etc.Many more details like this are included.

Assuming we got a set of instructions to solve our space-travel limitations from an advanced civilization, how could we possibly build it? What could they also include in the instructions that would allow us to manufacture this engine?

Time: expressed in time units of 0.70 billionths of a second, the time period associated with a fundamental transition of the hydrogen atom 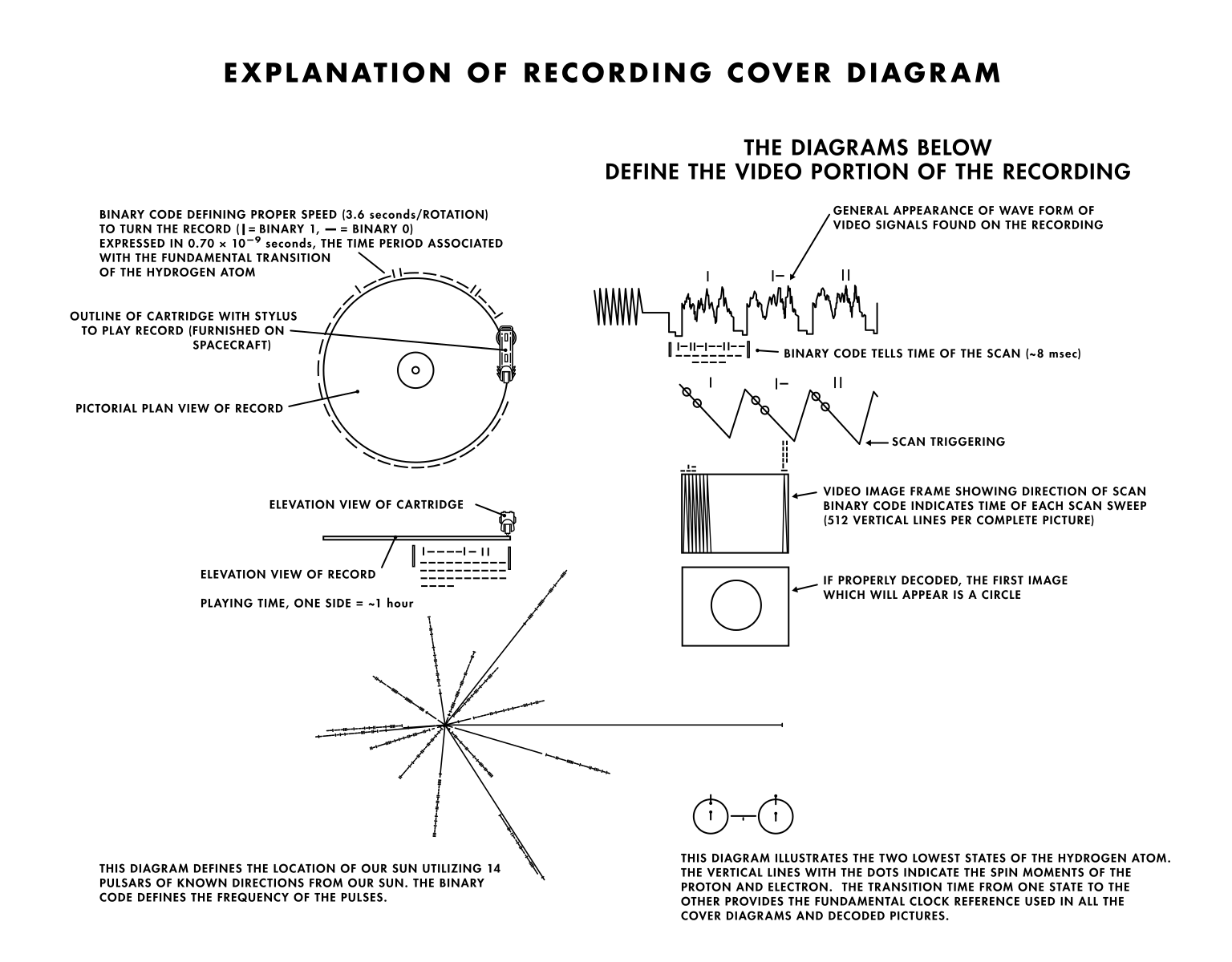 Distance: how far light travels in a vacuum in one of those time units

All our units of measurement for physical quantities have absolute definitions, which mean the exact same thing everywhere in the universe.

I would assume that long before going into the details of the antimatter engine they told us that a gwelrit is the length of the path travelled by light in a vacuum during a time interval of so many dyups, with a dyup being the duration of so many periods of the radiation corresponding to such and such hyperfine spectral line of such and such atom. And so on.

Basically, explaining the magnitude of the units of measurement referring to physical quantities is easy. It would be among the first things that a technical manual would include.

As it is the custom when translating novels from American into another language. The first time the word "inch" comes up in the original, the translator would translate to some archaic word denoting a local obsolete unit of measurement (for example, in Romanian it would be "țol" or "deget"), and put a footnote saying that this word translates the American word "inch" and one of those equals 2.54 centimeters. Same for gallon, ounce, furlong, firkin, hogshead etc.

The problem exists also in Earthling-to-Earthling communication; some physicists use a system of units of measurement where the speed of light has the numerical value 1, so that it disappears from formulas. In olden days, many physicists used any of a family of systems of units of measurement called CGS (for centimeter-gram-second), which are conceptually different from the common SI of our days -- even the basic formulas don't translate directly. But it is still not all that hard to explain what a statcoulomb is, and how it relates to a regular coulomb.

Now, some units of measurement refer to sensations, such as the phon for loudness, or the candela for luminous intensity, or our color models. All we can do is send the curves which relate those to physical quantities, and hope for the best.

Units aren't the biggest problem — not by a long shot

I don't know what your aliens are like, or how much more advanced they are, but I can explore a different (and analogous) problem: could we teach a medieval society, circa 1450, to make an iPhone?

For starters, they wouldn't understand the operating principles. They don't know what electricity is, or a wire, or a semiconductor. They've never heard of a capacitive touchscreen because they've never heard of capacitance. How could they understand an OLED display when the discovery that white light is made of colours is still 200 years away?

You might ask "can't they just follow the instructions blindly?", but that won't work. They can't do quality control on the phone's components without understanding what each component is supposed to do — they'd just end up building a phone in which all the components look right, but don't work. To them, a functioning microchip and a useless flake of polished metal are identical.

What about materials? They need ultra-pure silicon for the chips, oil for the plastic parts, exotic metals like gallium and arsenic to dope the semiconductors, lithium for the battery... and just look at what you need to make an OLED panel. They don't know how to make any of those! And even if they could find the raw materials, how would they process them to the required purity? Remember: these are people who, if you handed them a lump of pure gallium, wouldn't even be able to identify it.

Manufacturing: iPhone chips contain components that are just 5nm wide — much smaller than the wavelength of visible light. We'd need to send instructions for building an electron microscope just for them to see those components, much less manufacture them independently! Of course, we'd first need to explain what an "electron" is...

Troubleshooting: Nothing works first time. According to Elon (who says dumb things, but in this case knows what he's talking about), "building a car factory is 100 times harder than building a car". Even if you know what the end result should look like, you still have to figure out how to get there. Our medieval friends will need to bootstrap a boatload of industries just to make the components they need: oil drilling, oil refining, organic chemistry, inorganic chemistry, rare-earth metal mining, silicon chip manufacture, battery production, etc.

And what if things don't work first time? The communication is one-way, so they can't ask us for help. They don't have the institutional knowledge they need to solve the inevitable problems.

Funding: it should be clear by now that this is a massive undertaking for the medievalists. For us, building a chip fabrication plant is a billion-dollar investment. For them, they need to boostrap multiple entire industries, from scratch, in a world that currently has no demand for those products. How the hell are they going to pay for it?

Workforce: the iPhone is manufactured in the modern world, by modern workers. It requires a skilled, literate, educated workforce. To build an iPhone, you need to teach an army of people about every step of the manufacturing process — all of which will be new to them!

In summary, the iPhone was designed with the assumption of a modern workforce, modern supply chains, a modern manufacturing base, and modern logistics. The design of the phone is inseparable from the civilisation it was designed for. Those medieval people would need to revolutionise every aspect of their society, just to make their first phone.

Medieval Europe is just 600 years behind us, and its inhabitants human, like us. How much greater will our difficulties be following blueprints written by aliens that could be thousands, or even millions, of years ahead of us?

Of course, we won't have any of the problems I've outlined above. But we will have new problems, even more difficult problems, trying to understand an alien design, thought up by alien science, and made using alien techniques.

The hard part is not the design, it's everything that feeds into that. If we were advanced enough to follow the aliens' blueprints, we'd be at most a few decades from figuring it out ourselves.

Assuming we got a set of instructions to solve our space-travel limitations from an advanced civilization, how could we possibly build it? What could they also include in the instructions that would allow us to manufacture this engine?

Carl Sagan's novel Contact answers this specific question. In the book, the machine's technical manual is the message. But it is just as you say: we don't know their units or concepts, so it is mostly unintelligible at first. However when the characters investigate the phase modulation of the message they discover a primer - a key that explains all the concepts and units in the manual by extrapolating from empirical principles, such as the characteristics of a hydrogen atom etc. Mathematics is the same throughout the universe, so the primer soon teaches the Earth's scientists how to understand the message, and how to read the technical elements of the manual.

The message came from hundreds of lightyears away. We cannot communicate with them, and they do not know about us at all.

This is where we must deviate from the Contact story. In that story the aliens had received an early television broadcast (the first one powerful enough to breach the ionosphere, which was in 1939) and so had some grasp of our body shapes, and were able to determine the habitation requirements.

However in this case I would suggest that the machine's manual covers mainly the engine itself, perhaps at several scales (because they don't know the size of the creatures reading their message). The engine would then mount on a habitation of some sort, and that would be explained with plenty of examples at varying scales, but left up to us to design, as they have no idea of our body shape and composition. The manual can still help us here, explaining the expected compression and tensile forces, acceleration, and such. If the intention was to carry humans, we could easily add in the missing pieces - aerospace engineers do this all the time.

I'm going to say units are the least of issues but for a different reason: I think they will express everything in fundamental units. Length will be that hydrogen length from Voyager, mass will be protonium, time will be the time for one wave for the hydrogen length.

They'll send a periodic table so there's no question of what the units are.

And it's not Zinc wire, it's atom-30 wire. Remove names wherever possible.

It's still going to have to be followed by a whole bunch of this-is-how-you-make-the-tool-to-make-that instructions, repeat however many iterations needed until you can be confident that anyone who can receive the signal knows how to make the item--and then probably a bit more so the receivers of the message can compare the instructions to what they already know and see that they are instructions to build something that works.

Epic engineering issue but I don't see a language problem.

Not the answer you're looking for? Browse other questions tagged engineering communication firstcontact .

11
Could a super-advanced but sociopathic alien civilization "blind-hack" Earth, even if it had never even heard of humans?
3
Can a human crew handle cyclic extended high relativistic speed operations?
7
How to form a space government with only communication?
1
What socio-economic pressure would cause humans to depend on an interstellar resource?
2
How much antimatter can we theoretically hold in a Minimum Magnetic Field Trap?

12
New inhabited invisible island appears - how do they make first contact legally?
3
Planning magical language lessons
3
Anomalies/"impossible" events: what factors would make them more (or less) credible?
26
Recognizable natural numbers for alien message?
19
Non-visual Computers - thoughts?
8
Repulsive magical engine
5
How to build a wormhole for FTL communication? [more Engineering than Physics question]
3
How to write martial/magic arts manuals so they can be deciphered and practised in a distant future?
1
Multiple observatories detect first contact, or so they think