How would iron and alkaline-rich soil affect plant life?

In one of the solar systems I've created for my fictional universe, there is a small planet within the habitable zone between the size of Mercury and Venus. It's an incredibly rocky planet, with high quantities of minerals. The sun in that solar system is smaller than ours, so the climate on this planet is rather cold, and there's very little water to be found, though it's not completely devoid of it.

Most of the planet is a cold rocky desert, though there are some areas with soil eroded from the surrounding landscape. The planet has a lot of iron--making the soil a reddish colour, I believe?-- and other metals, mostly alkaline (sodium, calcium, magnesuim, etc.). There isn't much organic matter in the dirt, but there is enough to sustain some amount of recurring life. From what I do know about how the climate would affect the plants, I know there wouldn't be many tall or large plants, it would mostly be shubbery and short grass.

At some point, humans land on this planet to explore, and take note of what plant life would be edible. Mostly, what I'm trying to figure out is, how would the soil composition affect the taste of these plants? I'm assuming most would be very bitter due to the climate, but I'm wondering if the type of soil would in any way affect how they would taste, or maybe even grow.

Also, if possible, I'd like to know some examples of plants on Earth in similar environments, to help me create more diversity within the flora than just bushes and grass. Ones considered edible would be especially helpful.

I am not sure about other places around the world, but the soil of the Salento peninsula right in the heel of the booth which is Italy is precisely abundant in iron oxides and alkaline elements, being rich in limestone, with a peculiar red color. 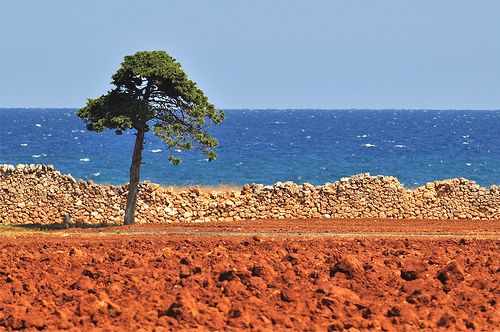 Farming is very well possible there, and whatever is grown there tastes perfectly fine.

Unless the soil also contains specific dangerous elements which the plants concentrate, it's not going to make a big impact on the edibility of the plant itself.

From this source we read:

Although not as demanding of iron as other vegetables, those that enjoy slightly acidic conditions -- a soil pH of about 6.0 to 6.5 -- such as leafy greens, peas, and beets, still enjoy iron-rich soils. Vegetables that prefer moderately acidic soils -- usually a soil pH of 5.5 to 6.5 -- prefer more iron than crops that prefer slightly acidic conditions and include turnips, tomatoes, squash and radishes. Those that prefer extremely acidic soils, such as radishes and sweet potatoes, enjoy iron-rich soils the most.

Blueberries and cranberries prefer loads of iron and grow in a soil pH of 4.2 to 5.0. Citrus trees often suffer from an iron deficiency, due their hefty iron requirements, so they're well-suited for iron-rich soils, but not overly acidic soils. Because strawberries, raspberries and grapes enjoy moderately to slightly acidic soils ranging from 5.5 to 6.5, they too benefit from higher iron content in the soil.

And from this source we read:

Alkaline soils are those that have a high pH, usually as a result of being rich in chalk or limestone.

Ericaceous, lime-hating plants shouldn’t be planted in alkaline soils, as they can’t take up important nutrients like iron.

You'll notice in that list plants we use to spice our meals and flavor our teas.

So it's not necessarily true that you'll have bitter-tasting foods. But if you're seeking realism, you might need to back away from some of your environmental conditions. From that second source we find that...

Getting the best from alkaline soils

Keep in mind the old adage that "life finds a way." If you want bitter plants on your world. Have bitter plants. If you want a "realistic" world (I'm not a particular fan of "realistic," it takes the fun out of fiction), then while you'll have a more limited number of plants, you'll nevertheless have plants. Plants that are well-adapted to their environment and include attributes that animals (including humans) consider delicious.

Not the answer you're looking for? Browse other questions tagged science-based earth-like flora .

11
What effect would a red sky and/or sun have on plants and animals?
26
What if an Earth-like planet had no axial tilt? (impact on ecosystem)
10
Red colored world
7
How to explain it rains only/always when there is no daylight?
19
How does gravity affect evolution of life?
7
How would a large arctic mountain range affect the weather?
10
How would a permanently cold tower affect its environment?
5
What if animals evolved from fungi?
7
What would a silicone-based plant, especially a tree, look like?
1
How would a moon's rings affect tides?