Would it be possible for a pre-industrial society to construct islands?

I am envisioning a scenario in which, probably for reasons of persecution or overpopulation, a people would begin to construct islands in the sea. Each island would be fairly close to the others and the society would want to be able to support agriculture on the islands. I had two questions about this idea:

Thanks for any help

Move the ocean off of the top.

Piling stuff in the ocean to make an island has a long track record. The Chinese are doing that now on a 21s century scale.

But what about just moving off the ocean and keeping it off. The Dutch have been doing that for millenia.

Pushing Back the North Sea For the next few centuries, the Dutch worked to slowly push back the water of the Zuiderzee, building dikes and creating polders (the term used to describe any piece of land reclaimed from water). Once dikes were built, canals and pumps were used to drain the land and to keep it dry.

From the 1200s, windmills were used to pump excess water off the fertile soil, and windmills became an icon of the country.

I propose your people make an "island" that is below sea level. Technically they make a big island with a big hole in the middle. The fertile farmland on the reclaimed seabed is surrounded by dikes and polders and full of windmills but is not a straight ripoff from the Dutch because it is way out at sea. Incoming ships tether on the outside of the dikes and people go down ladders on the inside.

Cool and fantastic for a built world and you could have it with older technology. Although people are doing it with new tech. The best image I found was from Singapore! 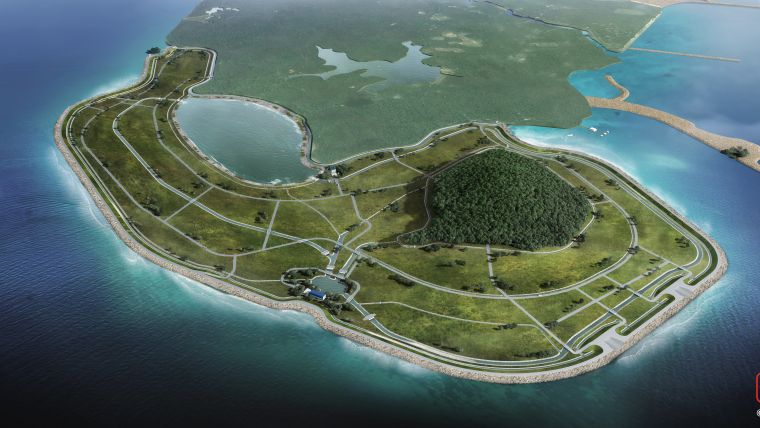 Man-made islands in Scotland and indeed very old - upwards of 5,000+ years old, so yes it is very possible. Citing from the second link:

Prehistoric tribesman rolled blocks weighing up to 25 kilos into the water to form short platforms you can still see today – though many are now covered by trees and other plantlife.

You probably would start with a man-made bridge (platform), and then just put a ton of them together in the sea to make an "island", before removing the stones used to make a platform. In other words, if you can make a land-bridge you can make an island, of some form. Perhaps the most notable example of a land bridge was Alexander's in 332 BC during the Siege of Tyre.

As far as what materials and/or structures are required, that really depends on numerous factors:

For example, village-style stucco homes in a shallow, non-turbulent sea will require a lot less than multiple skyscrapers in the middle of the Antarctic. Seeing as though small towns could be built in the Scotland-style islands, all you need is a lot of very big rocks. Once you have that, pack in dirt and get moving. Again, though, the environmental factors will drastically vary the requirements.

I'm fond of a quote from the movie, The Hunt for Red October:

Could nations during the Age of Exploration build artificial islands? Sure! Though they'd likely not be able to build one large enough for your purposes before the Age of Exploration ended. Bring in enough boulders to create a continuous barrier around the perimeter of the island (complete with docks... of course!) and fill the center with dirt until the water's gone and the dirt dries out.

But what's the point? The existence of an artificial island without desalination (invented in 1964) would require some method of consistently accessing fresh water. Yes, you could build a giant lake in the middle of the island (now that perimeter's getting big...) to catch rainwater, and you can build the perimeter barrier high enough (maybe...) to keep wind-driven waves from surging over the barrier and ruining the fresh water....

But what's the point? All that effort when it's thousands of times easier, cheaper, and more efficient to simply move an inland mountain to an existing shore and extend an existing natural landmass — and you need to move the mountain anyway just to build your island. No matter how shallow the ocean where you build the island, you'll need at least one mountain worth of dirt to make an island big enough for practical cultivation.

And you still can't ignore that barrier! Coastlines exist for reasons that can't be ignored without consequence. Just look at the Dubai attempts to make artificial islands which, having lost access to regular maintenance, are slowly eroding back into the sea. And what really hurts is that your barrier is perhaps the most expensive part of island-building. You wouldn't want a bunch of small islands because every inch of perimeter comes with a very high cost.

So... why do you need artificial islands? Is it just a cool idea to have in your story/game/world, or do you have a purpose (like establishing strategic colonies for defense or expansion)? If we knew why you needed the islands, we might give you a better answer as to how the islands can come to pass.

How about starting with something like a raft - it requires constant maintenance, so you keep adding new material, you plant sail-resistant trees (eg mangrove), whose roots bind the structure together, you add new material on top as it sinks deeper, and along the edges - and one day you realise the thing is touching the bottom in places. Shortly after, your now very big raft has become an island.

Perhaps not completely realistic, but with a combination of the right materials, plants, a culture of constant vigilance and clever application of general handwaving, you make it work.

Have you considered the amount of material it would require to do this? For example, just to carry the material used in the construction of the Washington Monument would take somewhere around 300 shiploads from a typical carrack ( most common merchant ship of the time ). I would imagine that even a small island built in shallow waters would require 10s of thousands of such shipments.

The illegal Chinese islands are built largely by dredging up sand and dumping it on existing islands or coral reefs. But our 15th century island builders wouldn't have the technology for that ( and might not want to do it anyway given the erosion problem the Chinese are having), they'd be digging and quarrying material on shore and then hauling it to a port to load on ships.

And when you're done, you're left with small islands that wouldn't have any natural source of fresh water. You'd be very limited in what crops you could grow because even the soil you're bringing in would be getting polluted by salt water spray and seepage.

Not the answer you're looking for? Browse other questions tagged environment geography geology flora .

3
What would be the possible climate for the islands in the Atlantic?
7
What kind of planet would have a “megamareal” tidal range?
16
Naturally-ocurring Airborne Floating Islands - is it possible?
8
Rock formations & islands on a moon with megamareal tides
13
Towers to Low Earth Orbit - How to make them usable for navigation
6
How plausible is this volcanic eruption event? Dark Age without total extinction of Stone/Bronze/Iron Age people?
4
How would a corrosive sea not erode the foundations for islands?
3
Any advice on what is a realistic way to use plate tectonics to create landmasses and barriers?