We all have seen gobs of energy beings in movies - but one thing that's always bothered me is how an energy being lives. What's life like in the energy world?

The Ergs are energy beings on some planet. They're pretty standard shiny-type. They have the ability to manipulate matter, but they can also move through any physical material at will. They aren't omnipotent like the Q; they have strength and intelligence limits similar to a human, except that they are made of energy. They prefer to live at or near the surface of the planet, though gravity seems to have negligible impact on them.

Like any advanced society, there is a whole continuum of creatures of various sizes and intelligence levels - wildlife similar to the beings themselves, but far less advanced.

I'm trying to get at how an energy being is structured - presumably not with cells. What do energy-bacteria look like?

This question started out in the sandbox: http://meta.worldbuilding.stackexchange.com/a/2197/489

Energy is the currency scientists use to determine if an object or system can do work. Energy is not a state of matter nor is it a messenger particle for a force. It is not a thing made of atoms, not a thing you can see, or otherwise touch, feel, taste, or any other sense. At the most, it composed of something more ethereal and otherworldly than dark matter, and at the least, it is a conceptual trick we use to make sense of the world.

This question is a bit like asking a country's GPD to pull an asteroid into an orbit; it is nonsense. Energy is, at its core, a concept, not a physical thing. Anime, Saturday morning cartoons, and other sources have it totally and utterly wrong.

You can see the effects of energy; we can indirectly measure it by measuring other properties of an object or system in question.

What is a Good Approximation For This Kind of Thing? 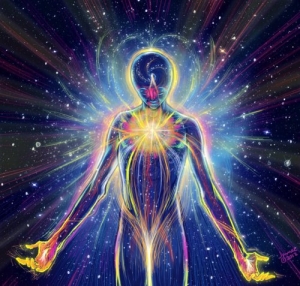 Plasmas, at least superficially, are a good candidate for this. A plasma is a state of matter which has so much energy that it is totally ionized. The light coming off of a plasma are electrons trying to get back down to a lower energy level; it's the plasma trying to cool off. So it gets you that look.

Plasmas respond strongly to electric currents, so you could (in theory, at least) have electric currents dividing areas of plasma into cell-like divisions. Otherwise, your plasma will simply expand to fill as much space as it can before it cools off. They can control their bodies by directing these currents, expanding and contracting as needed. The admission of particular ions into plasma cells could be the mechanism by which these creatures think and control themselves.

Plasmas are made of matter, so a hypothetical creature made of plasma can still hit/push things like you and me. Relaxing those electric currents can make the plasma expand or become less dense, so they could (in theory) move through matter. Also, the ability to become less dense lets them float, and since they react well to magnetic fields, they could use shifting fields to fly. Since plasma is made of matter, they eat (dissolve? ionize?) things to maintain themselves.

This is really, really stretching science here, but a plasma-based erg is at least making a nod to science.

Unless you want to call in some sort of extra-dimensional mumbo jumbo you're going to need cells. Energy has a tendency to dissipate (entropy) and without something to contain the energy in and stop it from dissipating, the quantum particles of energy could never become ordered and form anything.

These cells could actually exist in other dimensions I guess with resulting interactions with our dimensions. The cells also need not be the same kind as ours, or interact and contain the same kind of energy as ours do (chemical). I can kind of imagine some sort of obscure brains (collections of cells) which interact with each other via plasma or lasers or radio or something... but it's vague and unlikely to occur naturally.

The Taoist cosmology is my favorite place to look for such fantastic structures. The constant flux between yin and yang is very convenient to apply to wave-mechanics driven creatures, and if you want a "energy being," which has no matter, you are almost certainly going to be dependent on standing waves to give them a presence.

In the Taoist cosmology, the world starts in wu ji, literally translated as "without ridgepole." This is unlike our "empty space" in that it has chaotic flow within it, but no particular definition. Or perhaps this is exactly like our "empty space," if you use Quantum Mechanics to look at the fleeting virtual particle pairs that jump in and out.

At some point, a single point crystallizes into an entity with an identity (such as one of your energy beings). At this point, the are treated as a taiji, literally "great ridgepole," which means they have a yin and a yang side. This taiji grows outward until it reaches its limits.

Yin and yang are brutally hard to define in Western terms, but with respect to energy flow and waves, it is reasonable to define them in terms of directions of flow. Yang is flow outwards, and yin is flow inwards. I mentioned standing waves earlier. It is trivial to see a standing wave between two points which are oscillating back and forth between yin and yang, pouring energy from one to the other.

These in and outward flows are key because your creature lacks any physical form to keep its structure. It needs some structure to give it an "identity," otherwise it's simply nothing. Defining that structure in terms of yin and yang saves you a great deal of work reinventing things. Using yin and yang to create this structure is very powerful because the Chinese spent thousands of years working with those terms, so there is a massive body of material for you to draw from; you don't have to invent the entire energy-being system yourself!

For instance, it points to how the energy beings could interact with physical beings. If you tried to drive a taser into one, it could softly allow you to push its structure away, but never actually breaking its structure. Meanwhile, it could search for very low energy solutions to its problem, such as reaching its energy into your brain, and softly nudging the electrical energy in the motivation part of your brain to end your resolve to use the taser (it might even channel a tiny bit of the taser energy to do so... waste not, want not).

On the other side, if truly threatened (perhaps it could not softly move away from the taser), it can do what is known as fajin, having all of its body shift to yang, generating a massive outward expansion of energy to blow you back. (obviously this comes at a great energy cost)

It also shows how larger groupings could form, like energy-bactera biofilms. All they need to do is balance yin and yang, and develop a structure which is hard to rip apart.

In fact, one could even argue for larger energy beings. The Chinese philosophy has a long tradition of the concept of "animal spirits," such as the spirit of the tiger, or spirit of the bear. When kung-fu schools develop forms such as "tiger kung fu," they attempt to capture that animal spirit, to the best of their ability. If you needed larger energy beings with personalities, developing them after these animal spirits would be a very effective way of capturing something useful for your story, without having to work out all of the fine details of how energy can communicate and interact.

Not the answer you're looking for? Browse other questions tagged energy-beings bacteria .

1
Could a society use kilocalories for setting the base price of goods/services?

18
How to kill an energy being?
1
Would an animal with a huge sack that could fill with a light gas like Helium be able to float in the sky?
3
How to trap a energy being?
6
Slowing or Averting Global Warming With the Help of Elemental Powers: Part 1 (Fire)
10
If we brought ancient germs to the present
2
How would medieval knights capture the anti-metal dragon?
5
Feasibility of Neutrino-based Energy Beings
2
How would you define an energy lifeform?