In my story I have a two-sided battle. I want one of the sides to mess with the other by hacking their radio communication.

How viable is it that one side could intercept and importantly block or scramble the communication so it doesn't get to it's intended recipient (in a coherent form)?

What current or as of yet uninvented technology could be used to achieve this?

Radio is made of electromagnetic waves. If you want the intended recipient to not receive the original message and instead replace it with your own you need to cancel their message. This can feasibly be achieved through a technology similar to active noise cancellation. If Alice is trying to send a message to Bob, then Eve needs to set up between them in space. Eve can listen to the message being transmitted on the Alice side of a space-based transceiver and broadcast the inverted waveform on the Bob side. If this is timed perfectly, the radio waves will experience destructive interference. 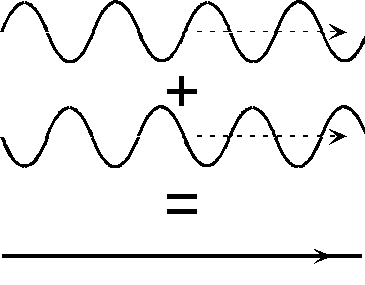 Once the message is cancelled, Eve can send out a replacement message to Bob without Alice ever knowing.

Old answer regarding simply stopping the recipient from getting a coherent message.

Radio is a set a frequencies on the electromagnetic spectrum. You can think of the different frequencies of radio inside that set as different colors of visible light, it is basically the same thing.

When you send a radio signal to somebody you basically write in a certain color on a piece of paper that anyone can see. This writing is in code so that even though other people could see it if they knew which color to look for, they couldn't understand what it says. The intended recipient knows which color to look for and what the coded message written in that color means.

So how do you prevent the intended recipient from seeing this message? You dump a lot of that same color onto the paper. This is what radio jamming is. You flood the area with nonsense writing of the same color that's trying to be sent, that is, you broadcast on the same frequency to drown out the real message with noise.

Intercepting the message first is a bit more difficult. Flooding the area makes the message unavailable to everyone, including you. But if you can place yourself between the sender and receiver you can listen on the sender side and broadcast directionally on the receiver side. This would allow you to get the coded messages and attempt to decode them while simultaneously blocking the intended recipient from getting the message. The sender would not be aware their message is being blocked/jammed except that they won't be receiving a reply from the entity they're sending to.

By far the easiest way to do this is to simply out-power their transmitter. Virtually all radio transmission systems to date assume the space between transmitter and receiver is modeled as an analog lossey channel, so if you can output 5-10x as much power as they can, your signal will dominate.

Scrambling would be more of a digital challenge. You have to decide how you want to interweave static, their message, and your message.

Note: the type of transmission medium matters. Most stellar communications are sent without a carrier frequency, because they'd rather transmit data on it. However, if the message was transmitted a. la. normal FM radio, half of the power is transmitted on a carrier frequency. It may be possible to dwarf their FM transmission simply by putting out a strong enough carrier to convince the receiver to attenuate the signal.

Tampering will be detected

Modern coding algorithms will work as checksums. If the message was tampered with, the recipient can tell. Private/public key pairs would make it impossible to insert fake information because the fakes can't be decoded with the private key.

A clever message protocol will even detect suppressed messages, when the daily "all is well" message doesn't arrive or has the wrong serial number.

Samuel's answer is very good, I just wanted to add another idea that can possibly make this work within a futuristic setting:

Radio wave cancellation: The idea of mimicking noise cancellation on the RF spectrum is good, but would be ineffective for all the reason's master_gibber described in his answer. By the time the canceller receives the communication and transmits the inverted signal, the original signal has already passed them by, and rendered their attempts at cancellation ineffective. In our current reality, there's no way around this...but in a futuristic setting, we have some other options.

A literal man in the middle: To cancel a signal being sent from Mars to Earth, an agent on mars could place a device on or near the transmitter (near enough to be able to communicate with it "instantly"). This device would be one half of a quantum-entangled "walkee talkee" that would communicate with an electronic warfare platform/ship at some point between Earth and Mars, to tell the canceller exactly what is being transmitted, and allow them time to prepare the inverse signal before the original signal reaches them.

Ideally, the canceller would be only far enough from the original transmitter that the radio signal would take exactly as long to reach the canceller as it would take the canceller to calculate the inverse signal. This way, the electronic warfare platform would be able to generate the largest cancellation shadow...though it would have no margin for error.

The man in the middle (or even the Mars agent) could then replace the signal with whatever message they wanted Earth to actually see.

Pros: This idea is based on a logical extension of technologies that already exist (though quantum entanglement is still in its infancy), so it wouldn't be too much of a narrative stretch to include this kind of application in a story set within the next century.

Cons: This raises the obvious question of "if there's quantum entangled communicators, why would you use radio?" The best answer (depending on the story you're planning on) is that one side of the conflict would have better technology/resources than the other. Alternatively, the nature of the signal being sent may require more than one recipient (since the quantum-entangled communicators would only be point-to-point).

An alternate idea: Depending on the nature of the signals being used, the same quantum entanglement device could be used without needing a transmitter in the middle. One agent could place the device near the Mars transmitter, and another agent could place the sister device on the Earth receiver, and cancel the signal after it's already been received, but before it's been demodulated.

This would still require a QE walkee-talkee, but the actual cancellation would require very little power, and is actually the sort of cancellation that some telecom companies currently do with the undesired portions of their own signals in-house.

If the signal was very directional, or could only be decrypted by that one receiver, then placing the device directly on the receiver itself would blind recipient, and allow an agent on Earth or Mars to inject data at will.

Yes, it is viable

but you need to do it with WW2 era radios that don't frequency hop or involve voice encryption.

On modern spread-spectrum radio hopping enabled radio systems, it's rather difficult. Jamming radios that use this technique is very hard because the frequencies are set far enough apart that jamming must attack many frequencies at the same time. Intercepting spread spectrum transmissions are also difficult unless the pseudo-random frequency is also known.

KY-57 was a voice crypto system developed in the 1970s and deployed in the 1980s. A list of historic crypto-systems can be found at the CryptoMuseum.

If there's any kind of encryption on the radio traffic, it's going to be really hard to jam or intercept spread spectrum frequency hopping radio traffic.

It's tempting to think that a RF (radio frequency) equivalent to active sound cancelling would work here, but the fact that we are dealing with light, rather than sound, makes this theoretically impossible.

But light moves as fast as anything through the region of space where the signal cancelling device is. Any delay in the production of the negative RF wave will mean that the two waves are offset and do not completely cancel. The final signal that the intended listener will see will be some mangled radio wave derived from the original. It will not be immediately recognizable, but it will sound remarkably different from background noise. Once the listener figures out that it's as partially cancelled signal, they can reconstruct the original by guessing the time offset and running it through a Fourier transform. Voila!

[Edit: Here's how to reconstruct the original signal:

The delay problem can be avoided if the radio signal must pass through a non-vacuum medium near the RF cancelling device on its way to the intended listener. Because electromagnetic radiation moves slower in a non-vacuum, a vacuum conduit can be used to make up for the processing delay.

Such a device would have to be carefully placed and constructed. If the listener is also on the same planet, under the same atmosphere, RF signals may bounce of the ionosphere (if the planet has one) and ruin the whole thing. If the listener is far away, the RF cancelling device could be effective for most of the day. If designed properly, it will create a large node in the region of sky where the listener is known to be, but that node will rotate with the planet, allowing the listener to hear glimpses at dawn and dusk.

RF jamming and cancelling has been studied ever since radio was invented. This topic is super relevant to modern warfare and military intelligence and the brightest minds humanity has to offer have been unable to prevent messages getting through.

But you might be able to confuse your enemy by impersonating the sender.

Signal cancellation makes sense only in analog transmission, and that is not used in our case, so when it is digital, cancelling will not work as the transmission surely will use kind of CRC.

The only way assuming digital interface is intercepting,caging, decoding and injecting "payload" in to the broadcast.

That is more complicated approach, but possible regardless of the transmission medium. So the technology is universal. If it will be sonic, light or gravitational wave it is possible with proper technology to decode the base algorithm and use injection logic sequence to simulate the communication.

In theoretical model that can be done using gravitational capacitor as buffer or for original transmission.

If the communication we speak about is point to point , than it will need less energy and is possible to build prototype. Because the :shielding capacitance field: does not have to be huge, all depends on distance in space and it will give us the angle that we should cover in order to intercept signal. Than process and transmit with injected payload.

It's kind of stealth intercepting technology on quantum level. Far more to speak write about than we have place here :)

Not the answer you're looking for? Browse other questions tagged communication radio or ask your own question.

4
What good is a radio after a nuclear apocalypse?
7
Sci-fi scenario: could all radio communication be blocked?
20
Why would radio signals be invented/transmitted when communication is not an issue?
11
Anatomically correct radio communication
6
Radio Signal traveling 50 light years
6
Digital communication in pre-transistor era
9
What would make radio transmission unfeasible on a planet?
1
Intercontinental radio broadcasting in a post-apocalyptic world