What will be the best battery solution for keeping electrical power a tradable commodity in an industrialized star system?

On Earth, electricity became a tradable commodity thanks to Chile in the 1980s, it has since become a staple of international economic markets. One would assume the same outcome to happen on the interplanetary stage. However, unlike on earth, we can't string-cheese electrical conduits across the kinds of distances between orbital masses, and whilst 'beaming' electricity via laser beams is already a technology we are experimenting with today, and we could potentially use massive supercapacitor stations to store the output via static charge, which might even negate leakage thanks to vacuum, what are some of the more effective/portable alternative battery solutions for a Type II and beyond civilization? 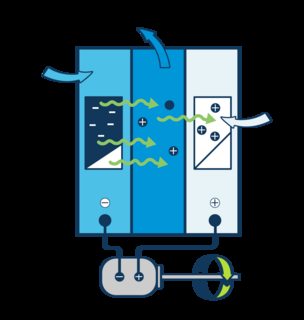 Yep. Hydrogen and oxygen. Both stable. Mix them and let their love make electricity. Just water in the end. Not that fantastic or fabulous. It would be kind of neat if you could plug the cell in and run it backwards and regenerate your H2 and O2 from the water. That can be the fiction. Maybe while you are getting crazy you can have bananas that are blue too! And spell "Korean" with a Q. Ok, ok going to settle down.

But if you want actual real batteries it is hydrogen fuel cells.

Batteries store energy chemically in structures that also have to carry electricity and mechanically support the cell, among other requirements. Capacitors are even worse: rather than storing energy in chemical bonds, they store it in a physical charge difference between conductive plates. The highest-capacity versions actually also do some electrochemistry of a sort on the surfaces of those plates, but still fall far short of batteries in energy density.

It's far more effective to transport tanks of chemicals that can be reacted when needed, for example in fuel cells. Another example is chemical rocket propellant...which also demonstrates that even this isn't likely to carry enough energy. With chemical rockets, it is difficult enough just to carry return propellant all the way to your destination. Low-cost interplanetary transportation with chemical rockets will require refueling at your destination, and for any but the shortest hops, that's likely to take more energy than you can deliver as payload.

And you can't avoid this by using non-chemical rockets. Perhaps your transport could be a solar-electric craft with huge solar wings, or a beam-rider with a smaller laser collector, or it could be powered with an advanced fission or fusion reactor...but all of these give you far more effective ways of getting energy to your destination. The energy demands of interplanetary travel are just too high to make shipping chemicals around a useful way to trade energy.

Antimatter and beamed power, at least for a while

Refining antimatter takes a lot of energy. In the inner system this means solar power, in the outer system fusion energy. While it is currently quite inefficient to produce antimatter, the facilities we use aren't dedicated refineries and there are theoretical possibilities like Q-mirrors.

For some purposes beamed energy (be that laser, particle of projectile beams)(a kilometer seized receiver isn't an issue in space) or Helium3 freighters might just be better options for some times and purposes.

However as civilization advances you will likely move towards matter to energy conversion technologies. Black hole Penrose processes, Kugelblitz micro black holes, magnetic monopole based conversation technology, ... Something will pan out in the long run. At this point is is E = m * c^2 * efficiency. So ultimately the civilization will be transferring mass (hydrogen would be my guess), as it is much simpler to handle than the alternatives and use local conversion reactors.

If you want crates of energy-containing things being shipped around the solar system, then hydrogen fuel cells are probably the way to go. Someone else has already mentioned that, so I'm going to raise a couple options that most people don't consider.

Lasers: Instead of batteries, use tightly focused and very, very carefully aimed laser beams. Much faster delivery time, and possibly fewer issues with degradation in transit.

Big rocks: Loosely speaking, a "battery" is just a means of storing energy. It's completely possible to do that in the form of gravitational potential energy - for example, pumped hydro-electric storage, where you pump water uphill past a dam so you can release it later. You can't really haul a lake to another planet, but anything drifting through space has lots of gravitational potential energy. If your civilization doesn't want to throw moons at their inhabited planets for some weird reason, they can just send spacecraft around carrying really big weights. On receipt, the weight gets attached to the upper end of a space elevator, and its trip down into the gravity well generates energy.

Hyperspace travel: If your FTL system uses something like an Alcubierre field, then an arriving ship may announce itself by hucking a smorgasbord of high-energy particles out in front. Set something up at the starport to catch this and you have free energy. (As an added bonus, this will protect your planet from having a mass extinction event every time someone comes to visit.)

Even in space, one of the best energy densities you can achieve is in liquid or solid hydrocarbons. Such hydrocarbons can be made on planets that have plant life and ample light - simply by planting algae and fermenting them into alcohols. These can be processed into longer chain hydrocarbons easily in chemical plants.

Not all places humanity settles have the required ability to sustain plant life or are too backwater to have large enough chemical plants to process enough fuel. Those little fringe markets however are unlikely to be serviced too often: To get anywhere, the ships need all their fuel to get there, and selling it at the destination is exactly the opposite of what you'd do: you need to buy more to get back!

Sadly, for all but fringe cases, trading any energy on an interstellar level is unfeasible.

Fuel as battery however, requires a generator as a converter, but those are comparatively small. The best method to earn from energy is to transport this equipment as a commodity.

11
What power generation method is the best to sustain a hovering city?
9
What stellar number density would two galaxies have to have for another star to collide with the Sun during a galactic merger?
40
With current technology, what would be the best way to store energy for future generations?
18
Starbuilding: What is lacking in the logic behind Cosmos 2 star system generation algorithm?
5
What is a reasonable energy solution for a proposed solar system wide Laser Propulsion array?
2
What kind of star will work for my system?
3
What is the viability of mineral-infused seawater as an effective conductor for an aquatic species' electrical needs?