Im working on this little hobby project and i've come to the stage where i want an actual world map. So id decided to use one of the mapgens out there untill i found one i was happy with:

Now i have been following Artifexian among others and i thoght why not make a relative realistic map. So first task was to draw out some plates. I mapped it to GPlates (where it actually looked really nice) and came up with the following: 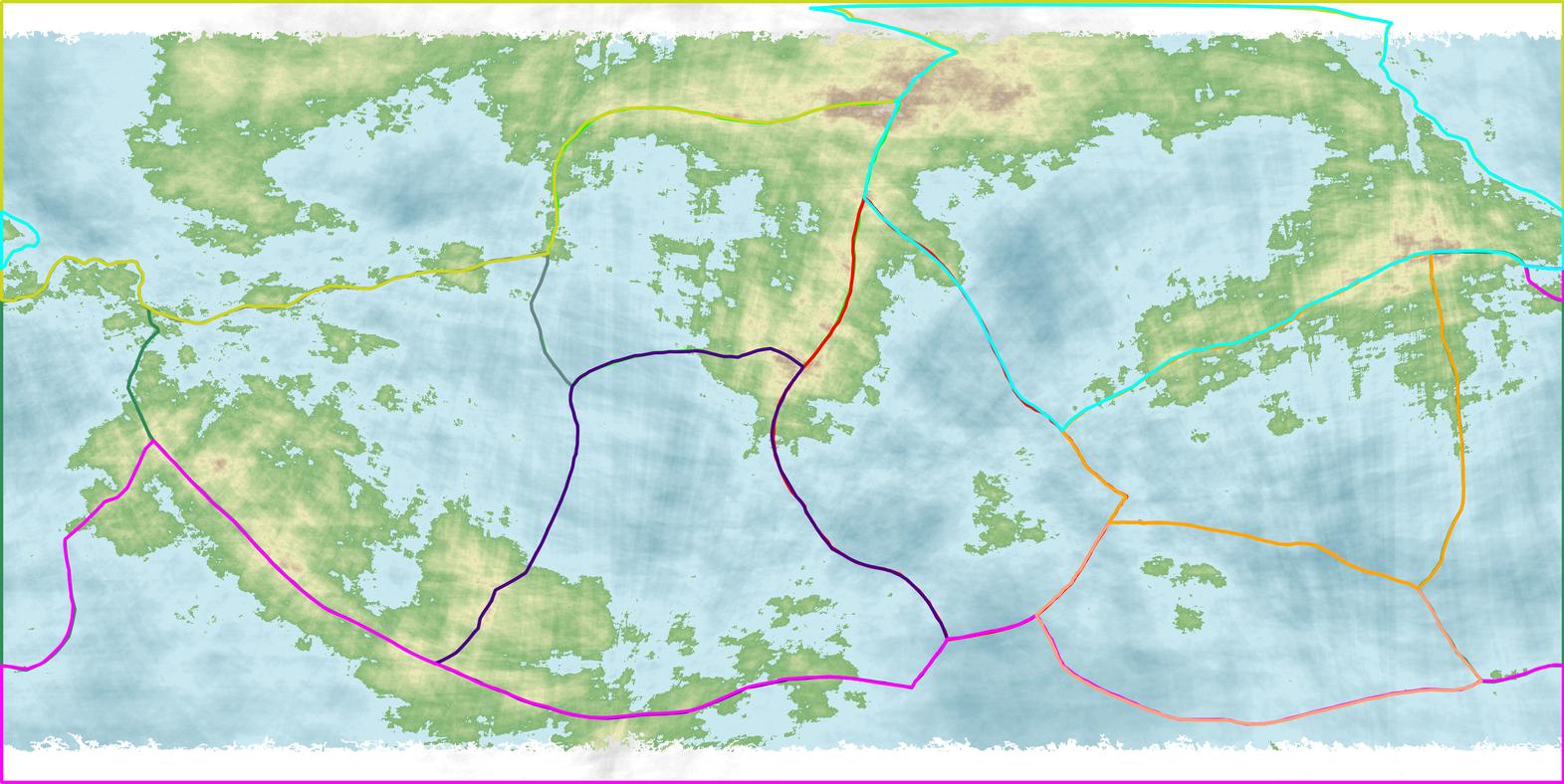 Now, is this reasonable placement of plates? Any tips and suggestions are welcome.

I want to mention that this is a generated map and a rough draft, i inted to keep cleaning it up as i keep working on it. I imagine there's way to many tiny island and stuff here and there, but i'll get to that eventually.

Firstly i would like to thanks for the feedback i recived thus far, it has been helpful. Now english is not my first language so i may have misinterpreted some things but so far this is what i've come up with:

The top borders looks a little wonky due to mapping, here's how the projected atlas looks: 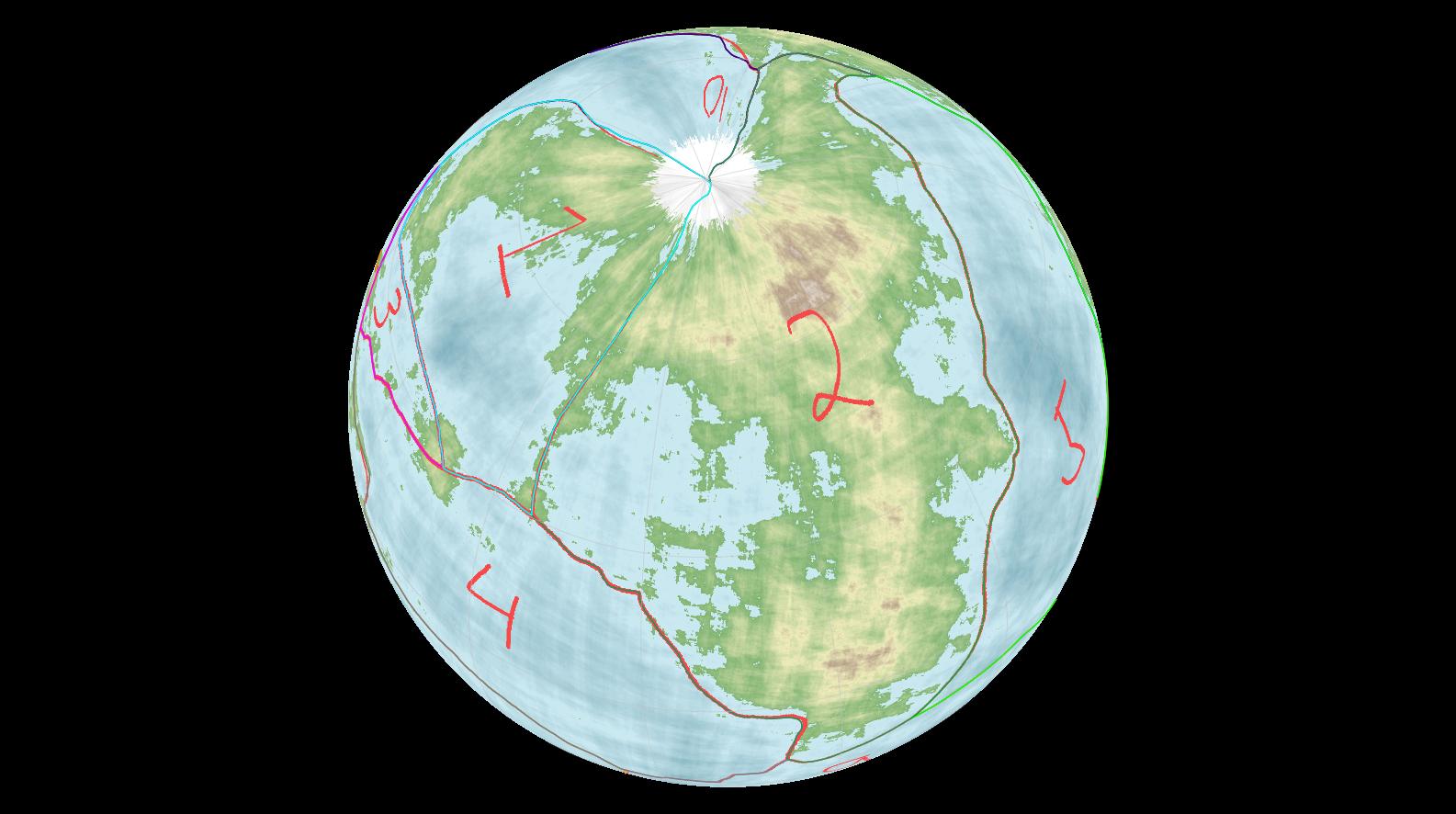 Any further feedback is of course much appreciated.

I am not a geologist and did not sleep at a Holiday Inn Express last night. My opinions are therefore subject to "don't listen to JBH, he's a dingbat" revisions.

When I say "fault line," I'm referring to major faults that separate major tectonic plates, not all the little cracks in the mantle that can run all over the place.

I strongly recommend taking a peek at how the Earth's plates are organized and use the same basic pattern rules to create your own.

There are no plates

A "fractal generated map" is, in geological terms, completely homogeneous, without plates of any kind. There are no Himalayas, no interlocking bits of South America and Africa ... no features of any kind to suggest plate boundaries.

To clarify I'll add: what I mean is that Earth's tectonic plates sometimes leave tall mountain ranges where continents collide, or a "ring of fire" marked with volcanoes above subducting material. The Atlantic, Red Sea, Mediterranean reflect wide, somewhat regular gulfs between land that has been separated by a plate boundary. Many of the boundaries of the continents are sharp and linear. Sea terrain is deeply marred by ridges and abysses.

The continent I see here seems to have a random high spot, but not a mountain range; there are no wide gaps from spreading plates. The shoreline looks moth-eaten with many islands - an appearance that does happen where flat lowlands have been partly inundated by ocean, but not one seen where tectonic plates dominate the landscape.

The simplest thing is to say that this is a geologically inactive world like the Moon, with perhaps some traces of former bombardments but no tectonic plates.

No it is not reasonable.

Many mid continent plate boundaries are not good.

I really dislike the quantity of lines going through the spines of the continents. A few where a super continent is forming would be fine/expected. This map has practically all the continents with mid continent plate boundaries. For earth there is only one major obvious arrangement like this, the Indian sub-continent being driven into Asia forming the Himalayas.

Several other places on earth that have activity that suggests mid continent boundaries such as under North Korea/China are subducted plates.

Africa has a mid continent boundary but their is a distinct Rift Valley.

That is, there should only be mid continent boundaries where plates are being driven together.

You need to do more research. View some models of drift over time. Your map actually looks like you have drawn where the watersheds empty into which ocean(for the most part).

Not the answer you're looking for? Browse other questions tagged internal-consistency climate worldbuilding-process map-making tectonics .

6
Could I get some guidance on this map in progress?
4
Is it possible for a tectonic plate to be separating from all the plates around it?
8
How can I get my continent placement and latitude lines right to make my climates work?
13
Are these climate zones somewhat realistic?
8
Can tectonic plates have any shape and size or are there limitations?
6
What's wrong (if anything) with the tectonic plates on my fictional planet?
2
Maintaining tectonic activity without oceans?
4
How many tectonic plates should my moon have?
4
Mountain ranges and tectonic plates -- how can I make my world map more plausible?
4
Draft 2: Are my tectonic plate formations plausible?