How could an animal manipulate the flesh of a dead animal?

I am developing a disturbing creature called a Corpse-Back. After killing its prey the Corpse-Back will attach the body of the prey to its own body.

Relevant information on the Corpse-Back

How could an animal manipulate the flesh of a dead animal in order to use the flesh as an extra limb?

Interact and use the flesh as the real creature would

The puppeteer will integrate with the hairlike tendrils with the flesh. It will integrate with the nerves and the blood vessels. This will allow it to keep the flesh alive longer. This isn't supposed to keep it alive indefinitely. It'll just be able to use it as strength and shield for a time. During this time the flesh can be damaged, infected or die off, but this is inconsequential for the puppeteer. It can let go of the flesh if not needed anymore. In addition it can be highly resistant to disease and rot, allowing the rotting, stinking diseased flesh to also be a deterrent. The flesh can still provide nutrients to the creature while rotting, or feast on the life that thrives of dead tissue.

A corpse-back would thus 'reanimate' a corpse, but only for a time. It'll find a new relatively fresh corpse if it has discarded the ladt one (or provide the new corpse itself by killing something).

I will say that one way could be that these hairlike tendrils enter the limb's dead flesh and manipulate the tendons, mechanicaly and perhaps using a bit of bioelectricity.

I dont see how this Corpse-Back could sustain limbs from various lifeforms. It would need to be very efficient, capable and adaptable. Lots of handwaving?

Therefore I suggest the option above with the limitation that will work only on freshly attached limbs and untill they rotten or are no longer usable due to rigor mortis.

Your corpse- back is like a spider in a nest. They create a rigid to semi- rigid frame around themselves to which flesh and limbs can be attached. A biologically exuded glue would be good for this function. This also serves as a reservoir of food. Tissues not eaten are treated with a bitter-tasting saliva that cures the flesh like leather.

Limbs glued or otherwise affixed to the shell are operated with silken cords that are almost exactly like a puppet master with cords - pull one way to move a limb in, the opposite to swing it out. The corpse- back itself would work best with a degree of intelligence, using leverage or possibly even pulleys to move the leathery preserved limbs.

What it does is manipulates the mycocelial mat that’s symbiotically fused with it’s skin. The mat will be partway through the process of infesting (and digesting) the rotting flesh of the prey, converting it to more fungal mass that the corpse back will slowly consume (like fat).

This has advantages for the corpse back and the symbiotic fungus. The corpse back gets added protection, a way to get extra nutrients from its prey, a slow-release external digestion method and even (with some simple electrochemical stimuli) extra limbs. The fungus gets hugely increased mobility and access to a high-oxygen-high-sugar energy source for when it’s needed (this also allows the mat far greater function than you’d usually see in your average fungus). Win win.

This gives the appearance of moving the flesh around because the mycocelial mat will (as a matter of course) grow into the shape of the victim, and any undigested skin, bones or bits of flesh will be held in that shape by the fungal mass. The tendrils are the fast-growing sugar fueled precursors to the main fungal infestation, which then takes its time growing into a near perfect replica of the deceased. This also has the advantage of being species agnostic. It doesn’t matter exactly what the corpseback has killed and subsumed: the mycocelial mat doesn’t care as long as it’s not fighting back any more.

Over time the figure of the prey will become more and more formless as damage occurs, the mass gets reabsorbed for calories/nutrients, bones and teeth get expelled, fungal fruiting bodies sprout etc. but for a while at least the Corpseback will have its very own mushroom powered, partially decayed puppet.

However those zombie mushrooms are manipulating the bodies of dead insects. You can copy this method from reality and paste it into your creature 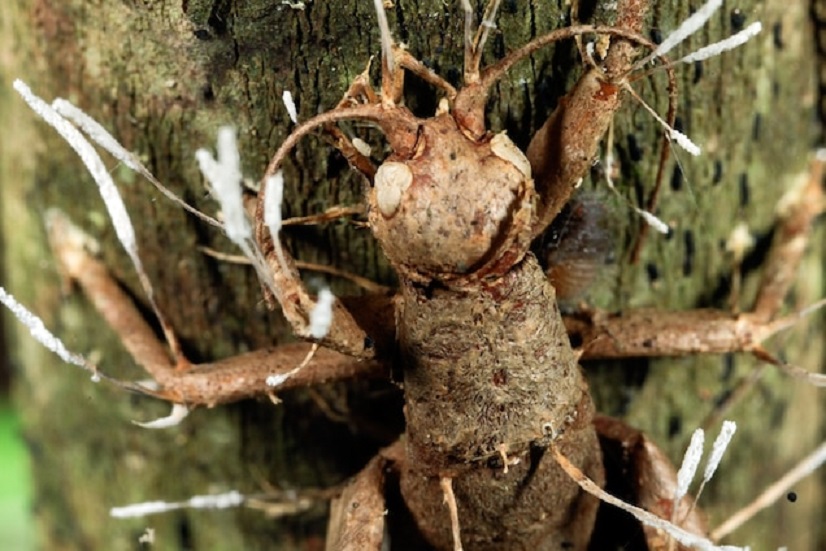 74
How often must carnivorous grassland eat?
13
Body plan of a 4D human-analog?
7
Iron-age tools, is there a way to extract heavy metals out of a creature?
6
How could a non round land creature puff up like a balloon?
4
How can the organs of a dead god take control of it's host?
7
Can the cobra hood ribs turn to and be used as functional "pseudo-limbs"?
4
Best place for wings on a dragon-eagle
5
Ecologically Correct Juvenile Phoenix
7
How long and heavy can a tentacle tail get relative to the animal it's on?