Suppose there is a wandering starship that travels between the stars, bringing blackjack and hookers to every wormhole it crosses. This casino is like any other on a planet or station, except it experiences frequent gravity shifts and spends extended periods of time in zero gravity, due to its spacefaring nature and it’s captain’s reluctance to install centrifuges. This presents many problems, but the most notable one is playing cards. Due to the setting’s retro-future aesthetic, digital and holographic cards do not exist, and poker just isn’t the same on a bulky CRT display. With gravity shifting so much, how can the cards (or tables) be modified to allow them to stay put in a manner that preserves its iconic card shape (e.g. no protruding ridges), last a long time (no conventional adhesives), and be easily operable by those under the influence (no special “card slots” on the table)? Can they be lined with ferromagnetic dust for use on magnet-lined tables? Can the tables use active airflow to suck cards onto them? What other creative and elegant solutions would be of use here? Or am I overthinking it?

Fortunately, you don't need to go further than 1963 to get your solution, when Norman Schuman filed patent 3,194,561 at the US patent office.

By combining a magnetic table top with cards with a ferrous center filler between two paper/plastic faces, you get wind-resistant cards. 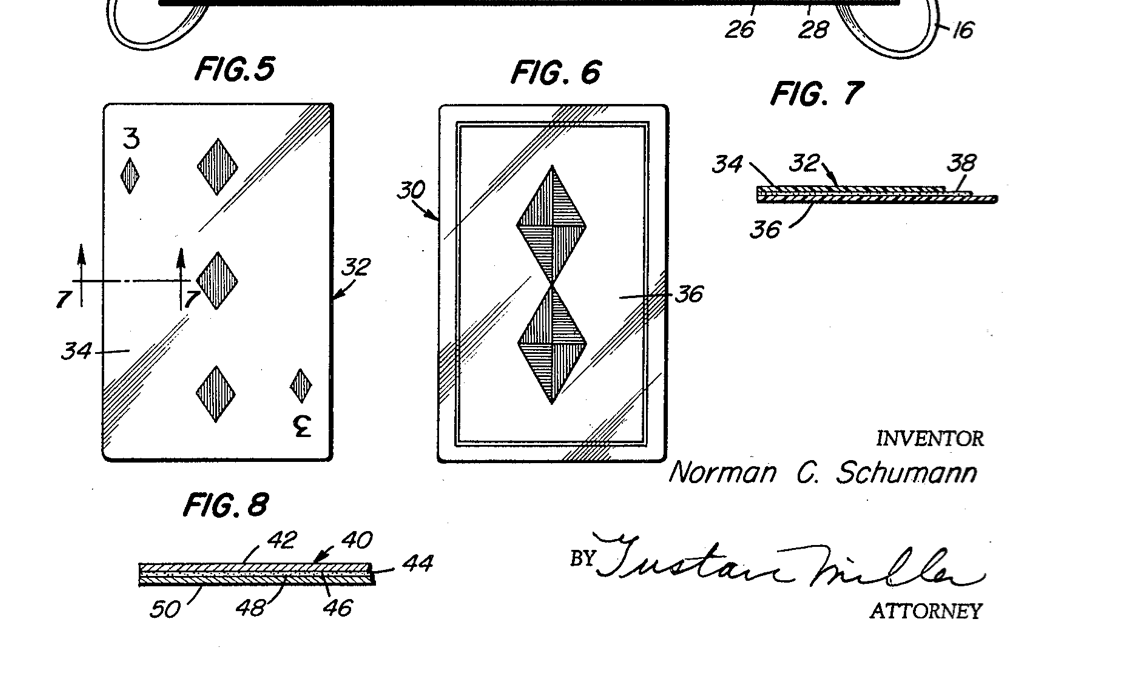 Here is a real-world implementation: 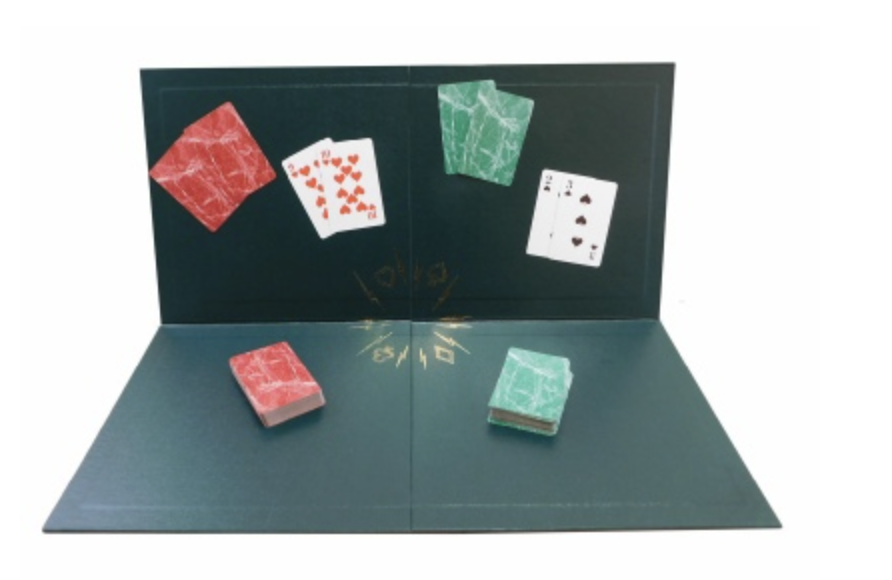 When playing card games, the cards are in three situations:

The first two mostly aren’t affected by freefall, but shuffling will be a problem if the cards stick to one another, magnetically or otherwise. Certain fancy shuffles need gravity, but skilful card-handlers can come up with freefall adaptations so that’s not a problem.

For holding individual cards flat, a vacuum table should work well with normal playing cards. To get a really strong vacuum hold-down, you would need to seal all around each card, but you don’t want them to be held too strongly anyway. If the cards are porous, it will even work for stacked cards, although I’m not sure an unsealed vac table would be strong enough to hold a whole deck of cards.

Realistically, I think you’d just have something like a bungie cord strapped across each edge of the table for players to tuck their cards under, and then some spring-loaded shoes in the middle for piles of cards, which would cover most games I can think of.

(If you google “CNC workholding” you will see a lot of solutions to similar problems, including details on how vacuum tables work)

We have an accepted answer for the right way to do this. But the nostalgic scenario means that the manufacturers will ask, how would OUR society do this in the near future?

The clear answer is the Smart Playing Card.

Take an ordinary paper card. Add 40 years of Moore's Law. A card is formally a communications device - it can display a number - so all the expected features of a cell phone are expected, even if it is hard to point to any specific law that makes them mandatory. The cards will contain at least 16 cameras, recording all angles; accelerometers; Space Positioning System receivers accurate to ten microns; multiple microphones; built-in fingerprint recognition on front and rear surfaces; terahertz beamforming antennae to upload their data to company servers in real time while imaging the surrounding room. The smart paper of the cards is audited by Digital Trust Us to ensure that it does not change and display a different symbol over the course of the game in a way that would be unfair, except as required by legitimate law enforcement processes or other considerations laid out in the Terms and Conditions.

To this, we need merely add some small actuators that can synchronize with the communications beams to move by interacting with their electromagnetic fields. A coherent terahertz beam (or any other radiation) will have a constantly changing electric and magnetic field, so by pushing off from it at the right times, the card experiences a controlled force. Playing cards are not heavy and it shouldn't take much to do this, and it's a good reason to explain why the terahertz scanner needs enough power to see through the privacy shielding on the conjugal bunks. (They are programmed to keep such information private on company servers, subject to the Terms and Conditions as updated in the most recent microsecond)

These playing cards are sleek, smart, they stay on a table where dealt regardless gravity, briefly turn blank if handled by an unauthorized user, report crimes and disagreements that may mar a gambling match automatically, and best of all, they are FREE because they are supported by carefully targeted advertising targeted to the specific user's DNA absorptions in the terahertz spectrum in a way that is completely anonymized from their name and official identity number. These helpful advertisements allow one-click access to gambling addiction treatment, bank loans, payday lending, organ and tissue research opportunities and more! But the cards display a traditional ornamental pattern once per millisecond so that any photography and video of this protected content permitted under the T&C will show a traditional-looking match without any of the ads, so that more relevant advertisements can be added in post. In-person audience members are strongly discouraged but not formally prohibited from using their Smart Glasses to screen out the ads in this fashion.

Cards in the deck or discard are kept in shoes that are bolted to the table, so they'll stay put until you draw cards from it. Cards belonging to players are either held in their hand, or held to the table by a simple mechanical spring clip.

I'm not sure if the table clips violate the "no card slots" requirement, but I'll also point out that for certain casino games, drunk patrons would have no need to use them. In blackjack, for example, a player does not touch any cards at all, so placing cards in the clips would be entirely the responsibility of the professional dealer.

Even in games where players do handle their own cards, table clips would be very easy to operate, and casino rules about how and where cards must be played should already be strictly enforced. Every casino should already have a protocol for what happens when cards are accidentally or intentionally revealed at the wrong time, and failure to use the clips is just one more way that a card could be revealed illegally.

It's not just the card tables that will have problems. Roulettes, dice tables etc.

Have the ship rotate on its own axis, problem solved. You can have a comfortable, constant 1G pull for all your guests and games.

This is so simple to do with even the cheapest lateral thrusters that there should be no excuse not to do it.

Not the answer you're looking for? Browse other questions tagged technology space-travel games .

9
Unmarkable cards
9
Safely exiting zero-tau capsule
10
Playing boules... IN SPACE!
7
Despite almost zero energy consumption why does my spaceship scheduled cryostasis in shifts?
4
How to adapt the Royal and Ancient Game to Zero-G?
3
Do cards require the printing press?
1
Playing nicely with a solar death ray