In many fantasy settings, soldiers (generally orcs) ride on wolves the size of horses, plundering and raiding to their hearts' content.

The only issue I see with this image (aside from using a carnivorous mount) is that it is almost never stated where these giant wolves come from. If one thinks about it, what is the ecological niche of such a large canine in the first place?

Is short, what are the ecological niches a giant wolf would occupy? 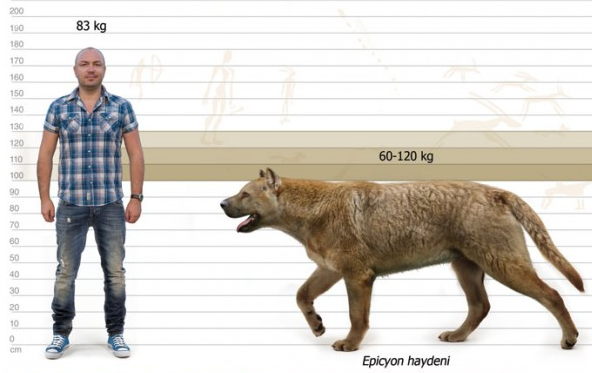 Epicyon haydeni is the largest ever species of true canine. It was only a bit more massive than largest canines today. It lived in the Great Planes region of North America filling more or less the same niche that lions do in the African Savana today. Unfortunately, this is a good bit smaller that a horse, but there is a much larger pre-historic animal that looks and acts a lot like a wolf that could easily fit the role of you wargs.

Megistotherium osteothlastes were a species of Hyaenodontidae making them not related to Wolves at all, but their similarities are enough I think they make a good candidate for this answer. These creatures lived in what is now the Sahara Desert, which was at the time, very similar to how the African Savanna is today. Weighing in at 300-650kg, these creatures fit well within the size range of a typical racing horse.

So what did these larger than modern animals have in common? Open grasslands and suitable large prey. Epicyon haydeni had access to various species of horses, camels, and rhinoceroses which would have been as large or larger than most prey that modern wolves hunt, and remains of megistotherium osteothlastes found alongside Gomphothere, suggesting that they hunted these distant cousins to modern elephants.

So, if you want your setting to have horse sized wolves using modern prey, putting them along side plentiful populations of too-big-to-hunt otherwise herbivores like elephants, hippos, and/or rhinos is probably the best way to go.

With that size it would compete with bears (130 to 190 centimeters) or big felids like lions and tigers, and would probably end up occupying similar ecological niches.

The actual niches strongly depend on the anatomical features of the creature, which you don't mention.

For sure, due to its size, it would need to be the apex predator and would need to have a large feeding base to ensure its sustenance. It might also become an omnivore like the bear is, in order to increase its chances of finding food.

A normal wolf needs 2.5 pounds of food every day.

If wolves become the size of horses, then their prey will also become bigger i.e. bison sized deer, or bison in large sized herds. This is necessary for their survival.

This article mentions that

Most nutritionists agree that a wolf's diet consists of around 60% meat and 40% plant material. This varies according to seasons and other factors.

Well, given what you say, it sounds like their ecological nice would be a domesticated animal.

Many draft horses are big, lumbering beasts. They have no ecological niche in the wild, they exist because humans bred them to serve as beasts of burden.

There is no reason to think things would be significantly different for riding wolves, such species could be selectively bred for size and other requirements. A grey wolf (the largest extant canid species today) can grow to about 92cm, roughly 2/3 of your target size. That scale difference is not too different from the difference between a normal riding horse and the largest draft horses, so it’s probably doable without issue.

On a side note, being carnivorous is not likely to be as much of an issue as you think. No canid is an obligate carnivore, and there’s no reason to think that your riding wolves would be either. Yes, they would need a lot of food, but that’s not actually too different from a horse, and a large chunk of that could be grains or other plant products (just like dog food in real life). Tolerance of a more plant-based diet is something that could even have been actively selected for during breeding.

It's probably a scavenger. The fact that "regular" wolves get no where near that size is a hint that the costs to being that size -- lessened agility, higher caloric requirements, etcetera -- are not "worth it" in terms of evolutionary selection. For that reason, this larger wolf is probably not a pack hunter like a "regular wolf."

I'm not up to date on this issue, but I remember a theory going around that the tyrannosaurus must have been a scavenger for much the same reason that your wolf would be. It's size would have made hiding/sneaking more difficult and fast chases downright dangerous (due to risk of injury). On the other hand, the size does make it scary and likely, then, able to scare smaller predators off kills that they made.

If you don't like the scavenger angle, I see one other obvious one. Big cats get much closer to horse-size than wolves. I think tigers are the biggest, but lions are close and socialize much more like wolves. I don't have the expertise to say why they ended up being so much bigger. My guesses range from bigger prey to different (likely more effective) hunting strategies to competition with other large predators/prey that created an evolutionary arms race (e.g. for lions: hippos, water buffalo, rhinos, etc. are a lot scarier than deer -- for tigers: they've been known to kill grown crocodiles, water buffalo also, etc.) to intra-species competition. If you feel like you find a satisfying explanation for the wolf vs. big cat size discrepancy then you may be able to adapt it to your purposes.

Personally, I think the scavenger angle is much more plausible. Dogs and cats have significantly different builds and I don't imagine the wolf building scaling as well as the cat's, much less scaling to be 2-3 times the size of the largest cat.

It occurred to me shortly after writing this that it's also plausible that the wolves were artificially selected-for/bred for size. Medieval knights did this with horses, so there is a direct historical analogue. When I came back here to check whether this explanation fit into the parameters of your question I noticed that a commenter made a similar note about breeding. I decided to add this to my answer anyway because it may be important to you that war horses, not just draft horses, were also bred selectively since that is a better match for your setting.

Personally, I still like the scavenger angle. I would use that or maybe have them be large scavengers that have been bred to be even larger by orcs. It feels really unlikely that a "regular" wolf could be bred up to 10-20x it's size. On the other hand, if your scavengers were already 5x the size of a "regular" wolf then why not try and make them a little bigger still? I think those two ideas could complement each other.

Not the answer you're looking for? Browse other questions tagged reality-check creature-design fauna ecology .

5
Which will survive better, a duck-sized horse or a horse-sized duck? What about the other creatures in this magical world?
6
Biological and ecological considerations for a giant worm
7
What would make a good dog/wolf foot in mountanous terrain?
9
Could a horse-sized wolf-like animal out run a horse?
1
Ecological balance in a pleistocene+ world
6
Ecological implications of osmotic portals
8
Can a horse-sized flying creature grab and carry a human's weight while flying?
3
Could a population lemurs evolve to suite colder climates and fill the niche or similar niche of squirrels?
4
How would a horse-sized water strider stay afloat and move on water efficiently