What type of organism should these brain symbiotes be? [closed]

Ask Question
Asked 3 months ago
Modified 3 months ago
Viewed 266 times
2
$\begingroup$
Closed. This question is off-topic. It is not currently accepting answers.

So, I'm designing A species of sapient extraterrestrials for a series of short stories, and I've decided it would add flavour if they relied on a species of symbiotic organism to enhance their intelligence to the point of sapience.

The mechanism by which this works is that the symbiote would release hormones and other chemicals which cause the brain to grow faster and for longer than it otherwise would. The symbiote has NO intelligence or cognitive processing on its own. It does NOT override the mind of the host, it only enhances host intelligence.

With that said, what kind of organism exactly should this symbiote be?

Some things that should be the case if at all possible, but which can be omitted if there is no other way to make the general idea work:

I was looking for an image from "The Long Afternoon of Earth"; in that story the protagonist is infected by a fungal symbiote that augments his intelligence. The symbiote in that story is intelligent in and of itself and communicated with the host. But on searching images for that story, Google image gave me this! 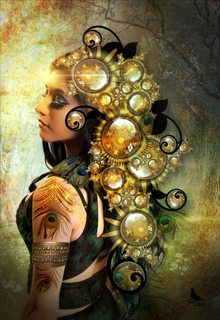 Perfect! I am sure the artist did not intent for this to depict a brain symbiote but if that is what you are thinking of when you see the image it works very well. All of those globules and shimmer is the symbiote. An exobrain if you will. It grows and ramifies over the life of the host. It has gotten medium large on this individual but they can get much larger. Symbiotes are not all alike and the specific augmentations they confer are not the same individual to individual. A young person will be infected with a symbiote she chooses or perhaps her clan chooses for her.

It might be possible to switch symbiotes later in life. Symbiotes might compete for their host. And symbiotes have a reproductive cycle of their own which can be a interesting time for the host. 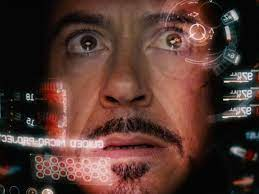 This should be an extension to Willk's fungal symbiote answer.

The exact nature of the brain symbiote -- It does not work by rewiring your brain to make you smarter. This crops up often in fiction and I find it hard to believe.

The symbiote works in a less invasive manner, by attaching to the brain stem and monitoring the nerve signals in and out of the brain. The nerve impulse are sent to an exterior brain like organism for processing. The symbiote sees what you see and feels what you feel, in addition to its own senses which includes a better sense of smell.

For examples in fiction consider Iron Man's Jarvis AI or Cortana from Halo. They are AIs built into a super suit who have access to sensory data from the suit, and can be given tasks and take over if necessary. The difference here is the symbiote does not have a personality.

If necessary the symbiote can assume control of your body, and do things it learnt to do from monitoring your sensory data. When the symbiote takes over the host experiences a state of "flow" for the new task where they know exactly what to do and don't need to think consciously. For example the symbiote might know how to juggle even if you do not.

The symbiote could also assume partial control to combine both your skills. For example someone who does not play videogames might have a symbiote who knows how to work a controller. So the human decides the tactics and the symbiote decides to turn the control-stick left and press the A button.

It cannot however hear your thoughts and it cannot communicate with you directly. You do not hear the symbiote talking to you in your head. It bypasses the head directly and makes you dodge to the left at the correct moment.

This is good for the host, as they get to retain a sense of self. It is not the organism taking control. It is me making use of the organism.

Hazing a child with leeches

Q: "If possible, it should be something that can neither pass through the placenta nor the breast milk, requiring young to be deliberately "infected"."

Aha, so you'll get it later, as a child.. Good, the creature I have in mind depends on oxigen, so it cannot live in the womb.

I propose to choose a creature that won't need the brain itself for food. Easiest is to have it fed with blood. Your creature "induces mutated neural growth" so I guess there would be a certain toxic substance emanating from the animal, which penetrates the blood-brain barrier, influencing the brain DNA and causing local cell division. It could inject its "roots" into the brain itself. These threads are organs attracted by electricity: the toxic would expand the brain in places where it is often activated. The ability to learn is enhanced. 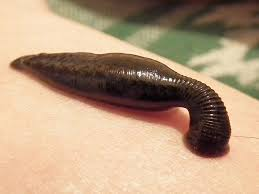 This brain leech is not only culture or tradition. Your aliens have adjusted to them in evolution, they developed special artery to host them. So they've lived with these leeches for a very long time. Applying the leech was done in all cultures in the past. A precious tradition, especially for parents and family. Not so nice for the subject.

It's scary, but it is for your own good

You get it behind your left ear and then.. you'll get a party and many presents :)

Anyway, the procedure is done by professionals, you'll get your bloodsucker ! You'd have some special arteries ready - through evolution - that feed this creature. When the leech-like creature is applied, in the presence of your happy family, it will immediately attach at a certain spot behind your ear and penetrate the skin, to find the artery, which is quite painful. In the culture of your planet, that pain is seen as hazing to prepare for adult life. After 2 hours or so, you'll get your presents.. and cheer up

Some sort of cellular endoparasite. Think "mitochondria". This probably means that it's an obligate (can't survive long outside of a cell). Reproductively it can't act like a virus where it replicates inside of the cell until the cell bursts, but that at various times in its cycle it somehow causes the cell to eject copies of itself.

This behavior likely favors only specific cell types. So it could be in brains only, if your story wants to go that direction. But really, the mechanism doesn't require this, since the endoparasite is either producing a chemical/hormone its host wouldn't produce on its own, or alternatively consuming such a substance to the point that it no longer interferes with the host.

Done right, this could lead to very bizarre evolution... the organism didn't shape the host species over many generations, but that the first generation to be infected early in development looks (and behaves, with amplified intelligence) vastly different than the parent generation.

You can also have many specimens who are somewhere in between being unintelligent and highly intelligent, the organism infected them far too late (past their developmental stage), or the infection was uncharacteristically too mild.

This can be exclusively limited to a single species. For instance, if we were talking about humans, it might infect them easily, but chimps and gorillas are simply different enough that the microbe does not infect them. Perhaps it uses a single receptor site on the cell exterior.

Not the answer you're looking for? Browse other questions tagged xenobiology sapience symbiosis .

5
What should be adjusted for old Earth-like planet?
6
Xenobiology of extraterrestrial parasitic superorganism
1
What evolutionary advantages would limiting cells per organism give?
15
Could an organism see in infrared light as well as normal light, using its brain to process what it sees into a single image?
7
What would be the usefulness of both arms and fins on a sea dwelling, amphibious organism?
4
what kind of biology/evolution to create Xing Tian/Blemmye type of humanoid/monster?
9
What blood pigment type is immune to ammonia poisoning?