How do Dragons Expel Sparks?

Dragons are vicious monsters that take pleasure in killing people by burning them with hellfire in their throats that was given to them by the Devil himself so that they can destroy everything in their path. Well, at least that's how the common folk tend to see them, but in reality they're just animals and a young boy is determined to study them to understand them better, so he stole and hatched a dragon egg.

His dragon has two holes one on each side of the mouth from which an oil comes out that easily ignites in contact with fire or something equally hot. He also noticed that whenever his skin was in contact with the dragon neck when it spits fire a current flows through its body and causes a very painful shock; maybe this is how dragons light the oil to create the infamous fire breath.

The dragon only created fire to go hunting, when it felt threatened or when its "master" ordered it. From the age of four, when the dragon was little bigger than a dog, it started releasing sparks in the air from its mouth whenever it was happy - and it found that could control the sparks. It could release a flurry or a cloud of sparks as desired. Whenever it did it was a beautiful phenomenon to behold, especially at night under the starry sky and the silvery moonlight; maybe that's one of the reasons why the baby dragon does it.

The doubt that hung in the air along with the sparks was: How is that possible? Maybe it could be oil, but each drop of oil would start a chain reaction and create a cloud of fire. Or maybe it could be the shock current that originates in the neck, but doesn't seem to have enough power for that.

Leaving the context of the story

The aforementioned "current" is bioelectricity that can reach voltages of up to 1200. Dragons release a few droplets of oil into their mouths to create a flame and then shoot a blast of oil that ignites upon contact with the flame, all of this very fast and can take a maximum of 1 minute to perform the fire breath. As for oil, dragons get it from the fat of their prey. For the answer, just remember to make it as biologically plausible as possible; it doesn't need explanations involving evolutionary theory, but the dragon has to be flesh and blood without metallic or even robotic things.

As for the world in which the story takes place, the best way to explain it would be to say that it takes place before any industrial revolution, that is, no steam engines, electricity, etc. My dragons don't have any flint and steel, this is not part of their anatomy. The secret of their sparks has to come from what was presented in the post.

Why do people think that lighter answers my question? Guys, my dragon is not a lighter, the sparks have to come from what was presented in the post, with no changes to the anatomy, i.e, no flint and no steel.

If these sparks are persisting in the air beyond the dragon's mouth, and are not simply a high-voltage electric arc, then it is likely that the sparks are indeed caused by the same oil as its flame.

In order to have sparks rather than a flame, it would have to be possible for the dragon to control the amount of oil released more finely than a simple open/closed valve. The oil would also need to be relatively viscous. Viscous oil would be an advantage in that it would allow a longer-ranged flame, allowing droplets to be propelled a significant distance while burning.

This control would allow a short-ranged, wide, hot flame by spraying oil forcefully, releasing small, rapidly burning droplets that would almost be an aerosol. Longer-ranged flame would involve larger droplets. Sparks might be medium to large droplets released slowly.

For fire breathing, you need a spark and then throw a spray of oil on it with a strong blow. 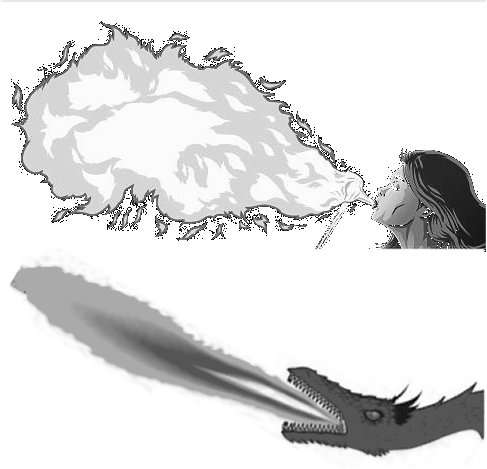 Mozambique spitting cobra (Naja mossambica) spits venom with great accuracy up to a distance of 3 meters.

The dragon can create an electric spark in its teeth similar to eel, and then throw a spray of oil stored in a bag like venom sprayed by some snakes.

Have it work the same way a sparkler does. The key ingredients are a metallic powder of aluminum, iron, titanium or magnesium (or some combo) and an oxidizer to accelerate the reaction. Iron and magnesium are readily available in many areas. The oxidizer components less-so but still available to some degree.

Antimatter contained in grains of sand.

..another solution for the dragon's spark popped up on WB today: suppose the dragon is able to find certain minerals, that can embed antimatter in their crystal.. dragons have a good nose for these things. The dragon only has to chew some grains of sand, and out come the sparks. You won't need much.. a nanogram already gives too much energy.. guess a a few anti-particles contained in the silicon lattice would be sufficient, to generate a little spark..

Not the answer you're looking for? Browse other questions tagged dragons .

7
Methane Dragons
5
What are the scientific issues with this method of dragons breathing fire?
7
How can my dragons use their tongues to control their fire breathing?
3
How might bridles for dragons be designed?
5
Acid-spitting dragons
9
Flint tongue and steel teeth for dragons?
3
Is my dragon's fire plausible?
4
How potent would a dragon's fire be?
3
Spitting Explosive Fireballs
10
Flames with Unusual Colors