How could a starship take on a planet-massed passenger without noticing?

A human-crewed starship is invited by aliens to accept the "ambassador from a rogue planet." They rendezvous at a predetermined point between stars roughly in galactic orbit. After the (seemingly humanoid) ambassador is transferred, the aliens blast off with an excessive show of thrust and transmit the cryptic message, "he's your problem, now."

The secret is the ambassador isn't "from" a rogue planet he "is" a rogue planet, or more accurately his position is connected to its position in a strange way. Perhaps he is its avatar or perhaps it's a giant ship or machine that serves him in some way.

The ambassador isn't dense, and the planet isn't a black hole. It has a normal radius for a planet but can occupy the same space as the ship without interacting except by gravity. Experts on the human crew (once they begin to suspect) speculate it must either be a piece of solid dark matter or, if baryonic matter, it is displaced in some way from normal space.

In fact, since the mass is diffuse and the ambassador is at or near its center of mass, it doesn't actually exert a gravitational pull in any direction inside the ship. They only see a gravitational effect when they try to fire off probes which slow and fall back towards the ship, narrowly avoiding striking it when the probes' automatic collision avoidance puts them instead into highly elliptical orbits around the apparent center of mass.

Somehow the ambassador is able to move around like a normal humanoid despite his connection to this larger mass. If the center of mass follows the ambassador, then the crew is able to cross reference perturbations in the orbits of the probes to the ambassador's movements in the ship to prove it. Or perhaps the ambassador has some freedom of movement near the gravitational center.

Nevertheless the human crew find themselves in the following predicament: attempts to pull away from the location with the ambassador on board result in the same inertial effect as if they are carrying a planet on board. And if they somehow convince or force the ambassador to disembark, they still can't get away from him: the ship, being purely interstellar, isn't designed to operate in deep gravity wells and has limited conventional thrusters.

The alien ship which previously carried the ambassador was rated both for interstellar travel and planetary landing; that's why they were able to get away. Now the crew of the human ship understand the reason for the seemingly gratuitous display of rocket power as the aliens were leaving.

Close to the insubstantial core of the planet, they shouldn't notice much gravity (and that's why I put them in galactic orbit in deep space, so they wouldn't notice its effects on nearby objects).

What I can't figure out is how the human ship approaches the alien ship without at least noticing the gravity well or turning their rendezvous into a free-fall?

They only see a gravitational effect when they try to fire off probes which slow and fall back towards the ship, narrowly avoiding striking it when the probes' automatic collision avoidance puts them instead into highly elliptical orbits around the apparent center of mass.

and they didn't notice anything

A human-crewed starship is invited by aliens to accept the "ambassador from a rogue planet." They rendezvous at a predetermined point between stars roughly in galactic orbit. After the (seemingly humanoid) ambassador is transferred, the aliens blast off with an excessive show of thrust and transmit the cryptic message, "he's your problem, now."

the only plausible explanation is that the aliens has some sort of gravity shielding technology, which they used to hide the "problem" to the humans and to avoid it harvesting more mass around it.

It probably consumed a large amount of energy, reason for which they were more than happy to hand it over to somebody else. 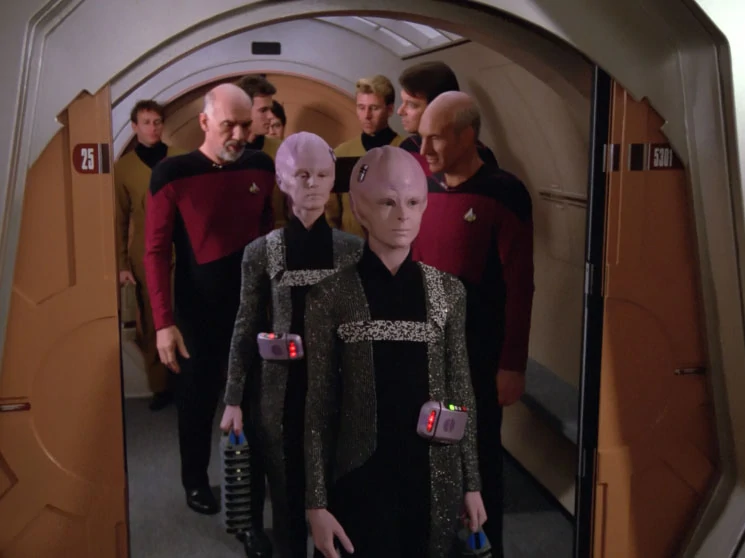 The ambassador's ship manoeuvred up to the Human starship, joined their airlocks together, and the ambassador walked from one ship to the next.

This did not set off any alarm bells from the Human starship. If they had impulse engines they could notice the increase in weight directly. "Hey guys the impulse engines have droped to 0.0000035 efficiency." But of course it is a purely interstellar ship. So no impulse engines.

The alarm bell was when the ambassador's ship fired its engines full bore into the side of the human starship to escape the gravity well.

Not the answer you're looking for? Browse other questions tagged space-travel spaceships gravity rogue-planets .

31
How to effectively slow down a ship about to shoot through the Solar System at 0.6c?
11
How to 'store' a spacecraft for a long-term expedition?
2
How long would it take to build a colonization ship?
7
How could it be possible to exert gravity without mass?
4
How could you tell if someone was messing around with your gravity?
4
Building an interstellar starship during transit
6
How to Salvage From a Sunken Spaceship
1
Efficient way and rough design to detect rogue planets in interstellar space
12
Would a spacecrafts artificial gravity give it an atmosphere?