Could a rocket use negative mass to fly without energy?

My scifi world obeys the real world conservation laws. This presents a problem for spacecraft; due to the conservation of momentum, the spacecraft will need propellant, and a lot of it, for every single motion

However, I believe I have found a loophole in the form of negative mass. If I were to insert negative mass, and the ability to produce it, into my world then it seems like we could have a ship that can fly without energy: If equal and opposite masses are fired from opposite ends of the ship, then it seems like there would be an overall change in momentum (as momentum is directional) with no change in energy or mass (as they are scalars)

Could this work under the given rules? Or is this simply too good to be true?

With negative mass things get crazy

In summary: yes, you can fly without energy - or make as much energy as you want - or get there without flying at all.

Different question, same answer, so I'll just reuse what I had writte for Artificial gravity as an engine

As far as we know, any massless drive in space belongs to the realm of Troll Physics. Even NASA's EM drive. They all boil down to this: 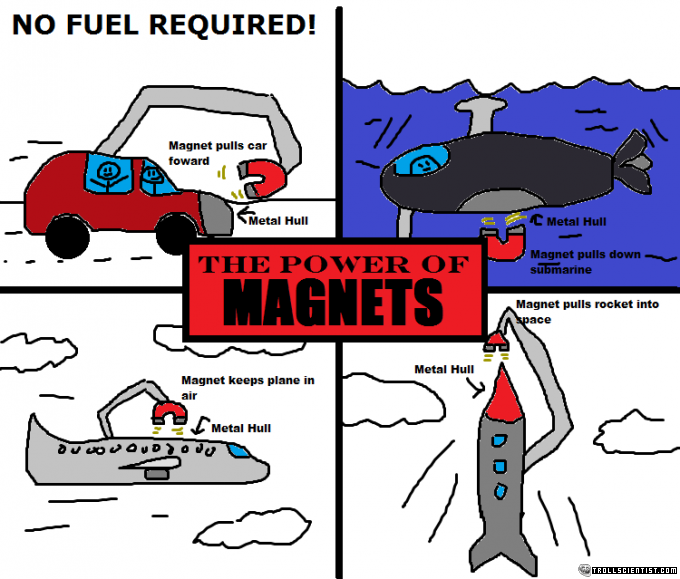 However! Nature herself is the ultimate troll. Accept this as truth, and all boffinry becomes much clearer and easier to understand.

What you need in order to build an actual, scientifically accurate troll engine is antigravity.

The Wikipedia entry on negative mass has this gem in it. The further you read, the more the troll nature of Nature becomes apparent:

Although no particles are known to have negative mass, physicists (primarily Hermann Bondi in 1957, William B. Bonnor in 1989, then Robert L. Forward) have been able to describe some of the anticipated properties such particles may have. Assuming that all three concepts of mass are equivalent the gravitational interactions between masses of arbitrary sign can be explored, based on the Einstein field equations and the equivalence principle:

Hence Bondi pointed out that two objects of equal and opposite mass would produce a constant acceleration of the system towards the positive-mass object, an effect called "runaway motion" by Bonnor who disregarded its physical existence, stating:

“I regard the runaway (or self-accelerating) motion […] so preposterous that I prefer to rule it out by supposing that inertial mass is all positive or all negative.”

— William B. Bonnor, in Negative mass in general relativity.

Such a couple of objects would accelerate without limit (except relativistic one); however, the total mass, momentum and energy of the system would remain 0.

This behavior is completely inconsistent with a common-sense approach and the expected behaviour of 'normal' matter; but is completely mathematically consistent and introduces no violation of conservation of momentum or energy. If the masses are equal in magnitude but opposite in sign, then the momentum of the system remains zero if they both travel together and accelerate together, no matter what their speed.

Forward used the properties of negative-mass matter to create the concept of diametric drive, a design for spacecraft propulsion using negative mass that requires no energy input and no reaction mass to achieve arbitrarily high acceleration.

So there you have it.

The idea of using negative mass to avoid physical laws is nothing new, but I assume you're not talking about FTL travel here? I think you'd first have to figure out where your unlimited source of negative mass was coming from, otherwise your ship is simply powered by unobtainium, and there are more sensible things to do with unobtainium. Rather than firing in two opposite directions, you might be better off creating a system which uses a negative mass drive to create localised regions of negative pressure which drive propulsion instead. Then your ship only needs half the amount of unobtainium...

I'm afraid this is a no-answer, I'd like to post both a practical and a theoretical objection..

Where to find material to build your ship, it will fly away from you..

Suppose for now, negative mass actually exists. A galaxy could consist entirely of negative mass.. you'd only notice the void around it, it will look the same. In that galaxy, the negative mass would attract other negative mass, nothing would really change in the observation.

To let your propulsion work, you'd need both types of mass, you'd only have a ship built of negative mass, the rest of the world would have to be positive mass. Suppose it works (hand-waive hand waive) with a negative ship mass, how would you build that ship, in the first place.. I wonder where the building material for the ship is harvested ? You can't have a negative mass planet in your positive mass solar system. This planet would not stay near the sun, it would be in acceleration, moving 1000s of km/second away from you. Same with comets and meteorites. They won't impact on your positive mass planet, when their mass is negative.

According to Einstein, the slope of a vector in space time will yield the perceived gravity at any point. The attractor resides somewhere "down", everything falling in the direction, along the gradient. We visualize heavy things as a "steep hole" in a 3d plane, the bottom being a stable point.

Now suppose you would model negative mass as the opposite: a steep hill in space time. Everything that sits on top of that hill will be unstable, prefer to move away from it, in any downward direction ! The ship will not move away from the planet, it will move toward the planet with even larger velocity. Conclusion: a steep hill does not work, to model your ship.

Instead, your ship would be on the opposite side of space time. You need a mechanism to climb up hill in our space time.. That would only exist, if our space time has an opposite, mirrored reality, on the other side, where the same gradient is perceived as go down hill. How separate would these two realities be ? And suppose you reside inside the ship, are you still in your world, or did you enter the antipode side of space time..

Not the answer you're looking for? Browse other questions tagged space-travel spaceships momentum .

5
Artificial gravity as an engine

2
Is it worth having artificial gravity by propulsion, in orbit or in “free space”?
1
Would a magnetic monopole rocket engine produce more energy than an ion engine?
1
Cheap Space travel
10
Proper combat distance scaling for a sci-fi space opera tabletop setting
5
How much energy can a space ship use internally without overheating?
7
Estimating thrust and kg fuel for a generation ship's journey to Alpha Centauri
15
Decelerating a relativistic, beam-powered starship at its destination without pre-established power-beaming infrastructure at said destination