When building a language & alphabet (especially between species) what range of phonemes (mainly consonants) should be included?

Most languages on earth do not have every phoneme. When creating a new language, how do I decide which ones to choose? How should I manage the relationship between different languages? I have a race of wolf-people as well as a race of humans & I'm not sure how to go about relating the wolf phonemes (which will probably be a lot more vowel, tone, & duration based) to human phonemes? The race I'm creating the language for is from the book series Codex Alera. Canim, (KAH-nimm). I'm considering making a TV series which I will need a language for.

I'm basing the writing style off of Futhark, because the characters have no horizontal lines. When writing in wood: horizontal lines would be invisible within the grain. This is why Futhark (& soon-to-be Canish) have only diagonal & vertical lines. They go against the grain & pop out visually. Even if Canim cannot produce the sounds of Futhark I can still use the characters as inspiration. Hindi, Finnish, & Astonian might be good languages to relate dog sounds to human mouths.

(I already did some research on this: I need(ed) information about what sounds dogs could physically make, but all of the information online was "If your dog [whimpers, yips, barks, etc] it means that they are [happy, feeling threatened, etc]." Yeah, thanks, but what phonetic sounds are involved in a bark?)

Keep your eyes out for a follow-up question about words & language rather than just phonemes!

Build the Bridge :: They will come

Essentially, languages of the sort you're describing serve as bridges between cultures and races of people. Two races in sufficient contact that they would find some sort of common interlanguage to be useful indicates that there is likely some kind of shared experience. Perhaps they are two races who inhabit a fantasy world, or two cultures that meet for trade and intercourse in a space station, or perhaps one has arrived on the other's planet for the first time and thought they would stop by and say howdy.

Given your descriptions of the two races, and the fact that you have presupposed that both have a compatible language capacity, compatible cognitive abilities and so forth, I think your job will be fairly easy.

The language itself doesn't have to be constrained by this or that set of phonemes. Humans quite naturally build interlanguages --- pidgins --- very easily when two groups sharing no common language meet. Culturally, you're going to be more interested in the two races points of commonality: why are they in contact and what do they need or want from each other?

You're going to become very interested in lupine anatomy and physiology to give you an idea how a wolf makes sounds; and then will likely expand from there to determine which sounds a wolf could make would make it into a language. So, you'll want to consider the wolf folk's language in and of itself. You'll also want to consider the human folk's language on its own as well. Once you've got an idea of which sounds they use in their respective native languages, you'll be able to discover how each will handle any language sounds the other can make.

Your task, in so far as worldbuilding goes, won't be so much picking from the list of all phonemes on the IPA chart, as it would be discovering which phonemes from the two lists you've already got will best facilitate communication between the two groups.

Let's do 3 groups of phonemes, and relate them to the canine mouth..

With their agile tongue, dogs will be able to perform a lot of consonant phonemes, like humans do. Most of your examples, actually.. and probably a lot more. Sounds like c, d, G (harsh), g, h, sj, zj, j, k, r, s, t are certainly doable.

Phonemes "w" and "v" will be softer, or too difficult. Human teeth have a flat top, canine teeth are pointy. It will be difficult to let it sound loud.. or they'll trick it.

Some consonants will be hard. Canines don't close their lips perfectly, like we can. A dog will have to do a trick, to perform phonemes that sound like b or p: humans can build up pressure and release it, a dog can't do that easily. Both "b" and "p" will be realized far up front, using only the air enclosed behind the lips.

There will always be air leaking through the teeth and through the bumped lips on the side of the mouth. The "m" will probably be out of reach for canines.

Also, (imho) a dog will have difficulties doing z, l, n sounds, which are realized using the tongue, but they are voiced consonants, which have properties of..

You did not mention vowels in your list. These are really difficult for most animals having large teeth. The teeth don't allow the animal to close the mouth on either side..

Vowels and voiced consonants are actually 2 resonances of the mouth cavity, determined by width and height of that cavity. There should be 4 closed wands for 2 formants.

Technically, you'll get 2 spectral peaks. These peaks characterize the vowel for the listener. For English vowels, the result voiced phonemes for F1 (horizontal) and F2 (vertical) are ordered as follows: 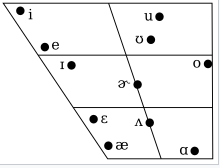 Humans have flat, straight lips. When they produce a vowel, with only the lips opened, they will have both resonances at their disposal. Humans also have musculature to manipulate these two dimensions independently, that is why we can make a very wide range of vowels, canines will have limited variation in above triangle.

When canines close their mouth, they will only have one prominent formant, in vertical direction. That is not sufficient to make a wide range of different vowels.

Vowels that canines will be able to do: listen to howling and crying.

Vowels like è (pair) and e (hay) need two strong formants, you won't hear them from dogs. But take the above vowel diagram, draw a straight horizontal line across. Canines will be able to produce (only) these vowels, depending on their mouth size. It should be vowels with a pronounced, single formant, something like U (like in do) or u (phonetic: y, like German ü not in English) or i. Canines howl and cry these sounds, there will be many examples on Youtube to listen to.

A third "nasal formant" does exist.. The nasal formant is made by humans, using the nasal cavity for resonance. It can produce phoneme "ng" like in "thing" and in fact "n" is nasal as well. I think it won't work in dogs, because their nose is very separate. Not sure though..

Not the answer you're looking for? Browse other questions tagged language interspecies-relations .

9
How can I name tribes to show the formation and development of cultures?
9
How does one approach phonology notation for a non-human constructed language?
5
Verbally communicating with a no-lips, no-nosed, spiked tooth alien
4
Could a language based on absolute pitch develop music?
4
How to make a bird/human hybrid language
8
Why would a language have three rhotic phonemes?