What is the most advanced form of torch?

In a pre-electrical age, anyone who needs a mobile source of illumination must rely on a lantern, lamp, candle or torch. Torches seem to be the cheapest, most primitive option, yet surely they have some variation in design just as the other light sources vary across eras and cultures.

What are the most advanced torch designs? Surely the original, most primitive torches were just sticks pulled from the fire, but you could do better than that. Any help would be appreciated.

Edit: I'm interested in this question because I am writing a story that involves cave exploration. For dramatic purposes, I like how iconic torches are: an open flame, held like a sword against the night. Yet it seems to me that any practical-minded spelunker of a society in the age just before electrification would prefer a lamp over a torch, since a torch is improved in every way by a lamp, assuming you have the resources and technology to produce one.

Just before electric lamps we used oil a lot. We even had people refilling and lighting the lamps when night set in.

An oil lamp is one of the most advanced ways to have a torch. A torch is basically a stick on fire, but can be augmented by oil in rags around it. Logically you take the burning torch to an extreme.

The oil used for the torch is put into a reservoir. A wick is added, closing off the container after a fashion. Via capillary action it'll drench the wick. If you put fire to it, extra processes besides capillary action will keep the wick drenched in oil. As long as the oil is on the wick, it'll not (or more often hardly) burn the wick. It can also be used in many orientations without affecting the flame too much, allowing its use on ships for example.

This will allow an oil lamp to burn efficiently with high regularity until the oil is gone. You might be able to also increase and decrease the oil supply by using pressure on the wick, allowing more or less oil to pass to the wick. This can help regulating the size of the flame.

Further augmentations are glass panels to control air flow and prevent the flame from going dying thanks to the wind. It also protects against rain and other weather conditions. You can focus the light beam with shutters and different kinds of glass/lenses. Tiny glass allows for colours.

The box it comes in can have many kinds of gripping mechanisms, allowing the mounting nearly everywhere. On a lantern, a pole, a ring or just in your hand. All relatively safe, stable and made for their use case.

Hollywood has long used link-type torches in movie production -- an expendable or non-expendable handle with an optional metal end, around which is wrapped tow (loose vegetable fiber, like rope that hasn't been twisted) soaked in pitch. The tow and pitch are replaceable on the reusable variety, burn fairly brightly and for a good while (roundly an hour or so); further, the flame is hot enough and distributed enough to be very resistant to wind and pretty impervious to rain of less than downpour levels. 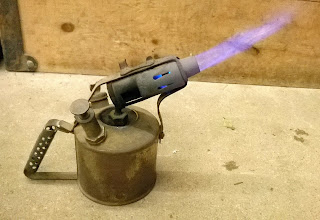 Made with a quicklime (calcium oxide, made by heating chalk) heating target. Usually seen with a shell-shaped (scallop or cockle-shell shaped) reflector. Gives an intense bright green/white glow, reminiscent of old-time music-hall.

I agree with the other sources here, oil lamps are probably your best bet. Something I'll point out though, is that if you have oil lamps you will probably have basic technology for electricity. Nothing like incandescent bulbs yet, but for very niche applications, like floodlights, early electric options are available.

Most notable among these are arc lamps. These were the precursor to our modern electric lights, and were relatively simple, requiring only charcoal sticks. However, they were not terribly efficient and were very bright. I'd recommend looking at this video as a great visual aid to this, as well as more info.

It first originated around the beginning of the 19th century, but with some finagling in a fantasy world (or alternate history) you could perhaps have it arise earlier - it all depends on demand.

I am aware that this question was about the most advanced form of torch. I felt this answer would be useful as it relates to methods for generating light before wide adoption of electric lighting.

Not the answer you're looking for? Browse other questions tagged technology medieval ancient-history .

12
What form of anti-gravity is the most feasible?
27
What would be the most extreme form of a surveillance state? And what would living/working in it look like?
15
How to improve manorial living with modern low-tech innovations?
72
What modern technology would be most revolutionary to ancient Greeks?
4
Most useful multi tools for dwarves
9
What torch-ship engine requires the least complex control system?