Where's the 'centaur of mass'?

This answer and my own both hint at centaurs being front-heavy or, as Separatrix puts it:

Centaurs have a permanent curse by horse standards, they are, by design, permanently very heavy on the forehand. 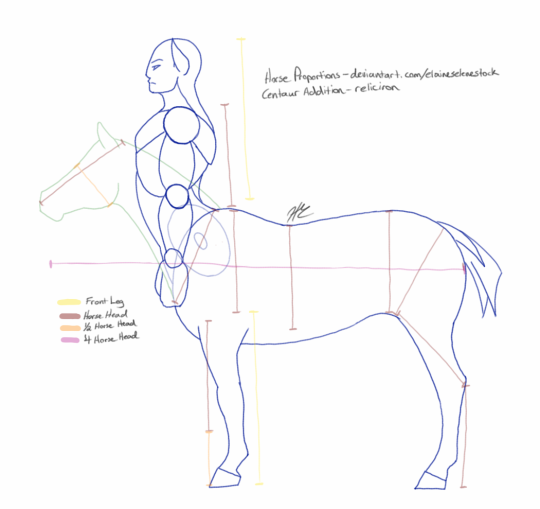 Given a centaur as pictured above (and no other), where is the centre of mass, or 'centaur of mass' so to speak? Does it change when going downhill?

When Upright, everything is fine, but it becomes a problem when going down hill.

On level terrain, this centaur works just fine. despite being heavier, human part is barely ahead of the horse part keeping the center of gravity somewhere safely between the front and back legs, but since the OP linked to this question about stairs, I suspect his real interest is a centaur's center of gravity going down hill... this is where it becomes a problem.

The more significant factor though is that as you tilt the horse, the Center of Mass comes in line with the forelegs. As the Center of Mass approaches the forelegs, weight is distributed to only these legs making a down hill walk very strenuous. If the stairs are steep enough, it can even put your Center of Mass forward of your forelegs which could cause your centaur to tumble going down hill with angles of more than about 25-40 degrees (depending on how much it can squat its back legs and arch its human bits). 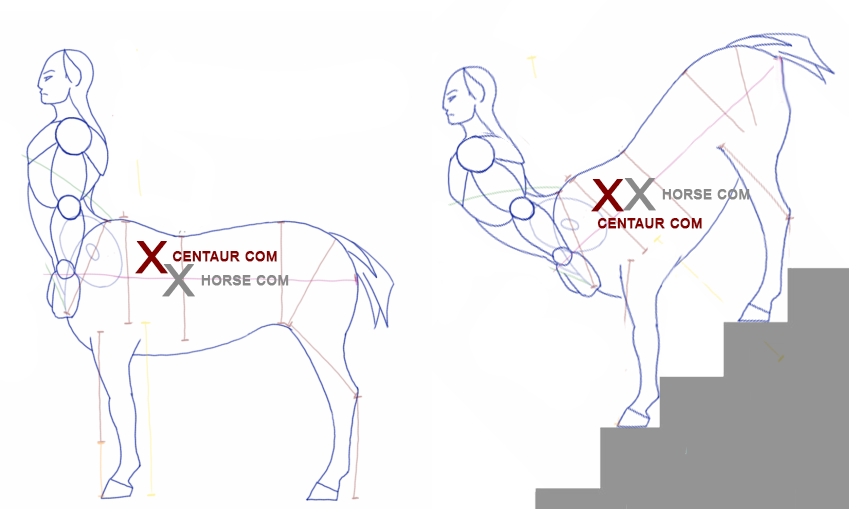 Why is the center of mass so far forward to begin with?

Because you've drawn your horse body very small compared to your human body. This is fine if this is how you want it, but if you were to extrapolate the humanoid part to standard human male dimensions, you would find that if the body belonged to a 6ft tall 178lb human, that the horse part would belong to a 10.5 hand tall 595lb horse. So this is less of a man:horse size ratio and more of a man:donkey or man:pony ratio. This is common in the way people draw centaurs because we want to draw the centaur's head at the same height as a rider's head, but a rider sits on top of the horse whereas a centaur's human part meats the horse at its lower lumbar region; so, we scale up the human bits to make it work.

The human parts that are included in the centaur are about 67% of a human's total mass; so, we can roughly say the human part should weight about 120lb. A horses head is typically 10% of its mass, so we are replacing ~60lb of head with ~120lb of human parts. The typical Center of Mass on a horse is located about mid-chest just behind the shoulder blades or ~60% of the way between the butt and manubrium, but since we are doubling the mass of the "head" from 10 to 20% of the centaur's weight, we need to adjust the COM a bit forward and upward of this 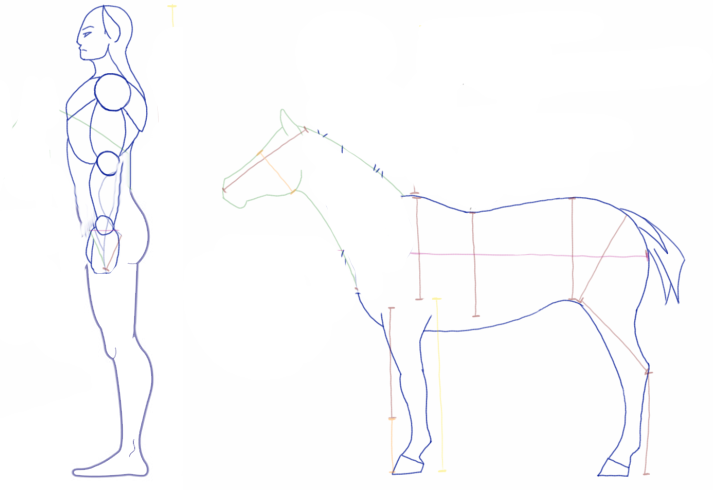 Centaurs have a permanent curse by horse standards, they are, by design, permanently very heavy on the forehand.

Let me fix that for you.

Centaurs have a permanent curse by horse standards, they are, by design, permanently very heavy on the forehand

According to this community of horse breeders, a horse's head accounts for about 10% of the animal's total mass.

And according to this cannibalism reference table, the legs and pelvis of a human account for 29% to 35% of their total mass.

Therefore, pick a standard 72kg man, and a 490 kg Thoroughbred race horse... The horse side will lose 49 kg of head and gain 51 kg of human at most, but most likely a bit less than that.

An extra 2 kg (about four pounds) of load onto the horse parts where the head used to be is like an extra 0,4% extra "head" weight. That is nothing. Both human and horses get a greater extra load than that when wearing some kinds of helmets.

As for the center of mass of a centaur, it will be just very slightly more backwards than the natural center of mass for the equivalent horse. The displacement from having a human rider is much greater and horses cope with it just fine.

When a centaur is making his front part upright as shown in your figure, his center of mass will shift a little backwards and upwards compared to that of a horse. He might be more stable than a horse because the weight of the front part will be directly on the forelegs while the neck and face of a horse are leaning forward.

It's the same as a horse.

It doesnt matter much.

Unlike Nosajimiki I think (know) its not a big problem. Lets imagine the human torso bending forwards and grabbing a pole in the ground, then lifting his rear end 45 degrees. Then the human torso lets go and lets gravity take over to see if he falls forwards or backwards.

This forms a seesaw* with the fulcrum at the front legs. The length of the "arm" of the horse torso is larger than that of the human torso even at 45 degree angle, so it needs less weight to get that side to move downwards. The horse torso part will be anywhere between 200 to 700+kg, the human torso without legs will be between 60 to 100 kg. There is simply no contest: the human torso part wont unbalance the horse part no matter what it does. Even the scenario where it reaches forwards and grabs something to lift the hindquarters up is a fantasy, even the strongest human beings would struggle lifting it, let alone lift it far enough to fall forwards. 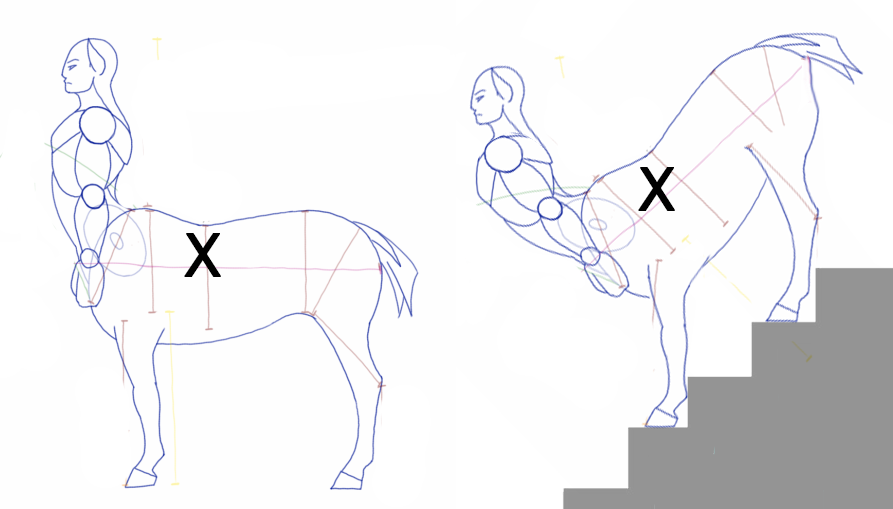 *I'm not good on the terminology right now

This code fills in your image, 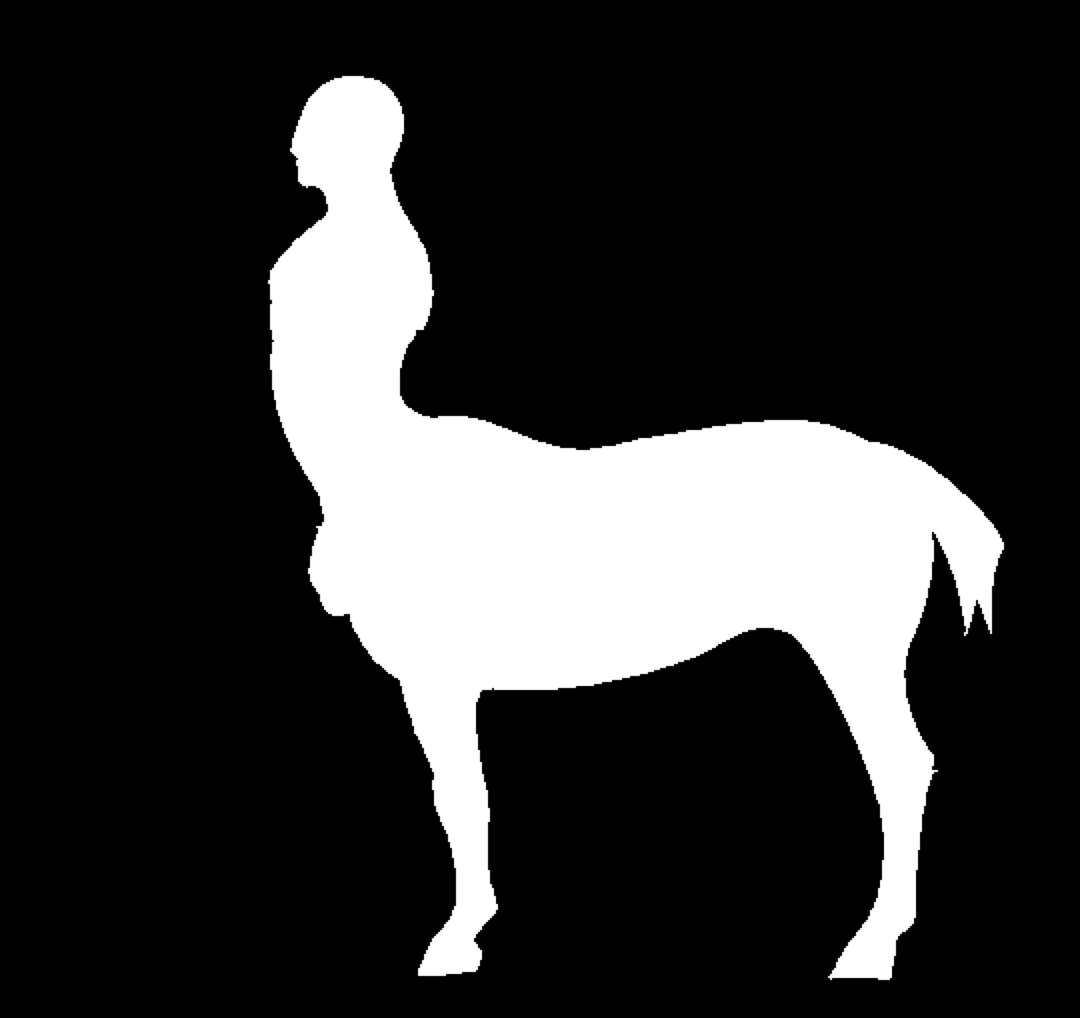 Then we can compute the average of all the white pixels: 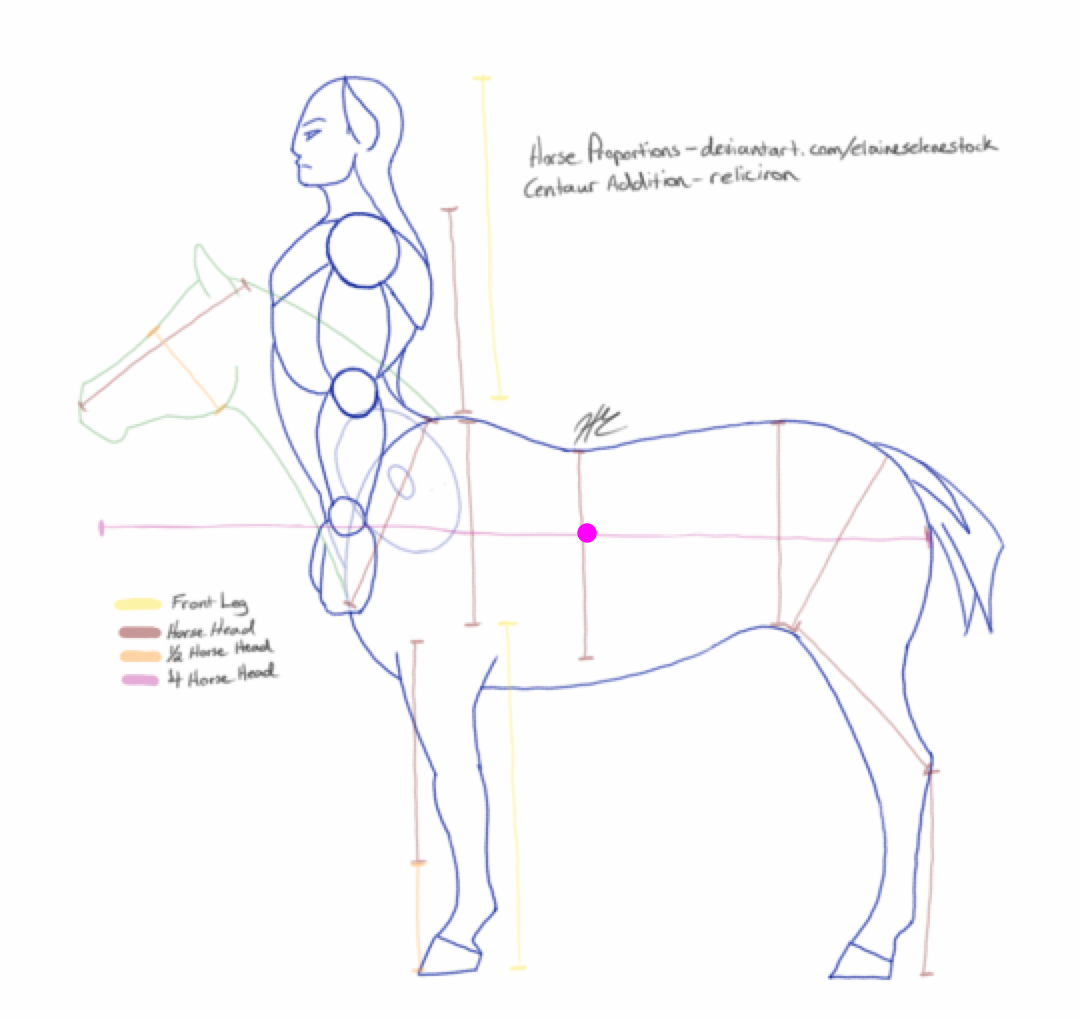 Your estimate was very accurate :D

Not the answer you're looking for? Browse other questions tagged science-based biology fantasy-races centaur .

19
How can we enable a centaur to climb between different floors?
2
How big can my centaurs be due the square cube law?

12
Where do Centaur organs go, and what size would they need to be?
27
What should centaur dwellings look like?
24
Feasibility of Centaur Hussars
20
The Centaur--Let's Get Real, Shall We?
2
How much blood is needed to forge a sword?
5
Centaur Accessories
5
What animals would a sedentary centaur civilization domesticate?
3
Could a centaur eat something that is poisonous to humans but not horses?